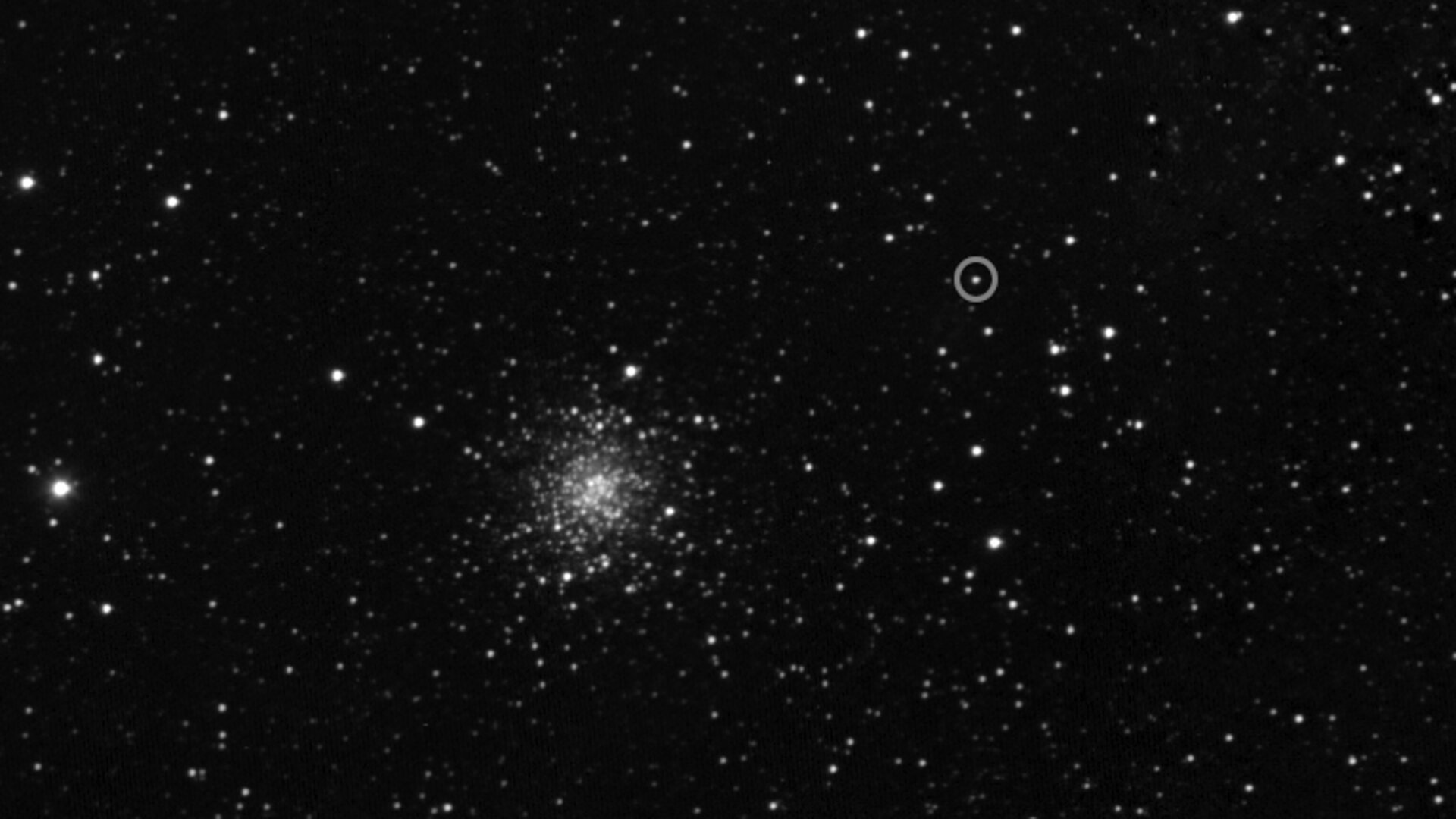 ESA’s Rosetta spacecraft has caught a first glimpse of its destination comet since waking up from deep-space hibernation on 20 January.

These two ‘first light’ images were taken on 20 and 21 March by the OSIRIS wide-angle camera and narrow-angle camera, as part of six weeks of activities dedicated to preparing the spacecraft’s science instruments for close-up study of comet 67P/Churyumov–Gerasimenko.

OSIRIS, the Optical, Spectroscopic and Infrared Remote Imaging System, developed under the leadership of the Max-Planck-Institut für Sonnensystemforschung in Göttingen, Germany, has two cameras for imaging the comet. One covers a wide angle, while the narrow-angle camera covers a smaller field at higher resolution.

OSIRIS is one of a suite of 11 science instruments on the Rosetta orbiter that together will provide details on the comet’s surface geology, its gravity, mass, shape and internal structure, its gaseous, dust-laden atmosphere and its plasma environment.

Rosetta has been travelling through the Solar System for 10 years, and will finally arrive at the comet in August this year. It first imaged the comet in a long exposure ­of over 13 hours from a distance of 163 million kilometres, three years ago, before entering deep-space hibernation.

Rosetta is currently around 5 million kilometres from the comet, and at this distance it is still too far away to resolve – its light is seen in less than a pixel and required a series of 60–300 second exposures taken with the wide-angle and narrow-angle camera. The data then travelled 37 minutes through space to reach Earth, with the download taking about an hour per image.

“Finally seeing our target after a 10 year journey through space is an incredible feeling,” says OSIRIS Principal Investigator Holger Sierks from the Max Planck Institute for Solar System Research in Germany. “These first images taken from such a huge distance show us that OSIRIS is ready for the upcoming adventure.”

“This is a great start to our instrument commissioning period and we are looking forward to having all 11 instruments plus lander Philae back online and ready for arriving at the comet in just a few month’s time,” says Matt Taylor, ESA’s Rosetta project scientist. 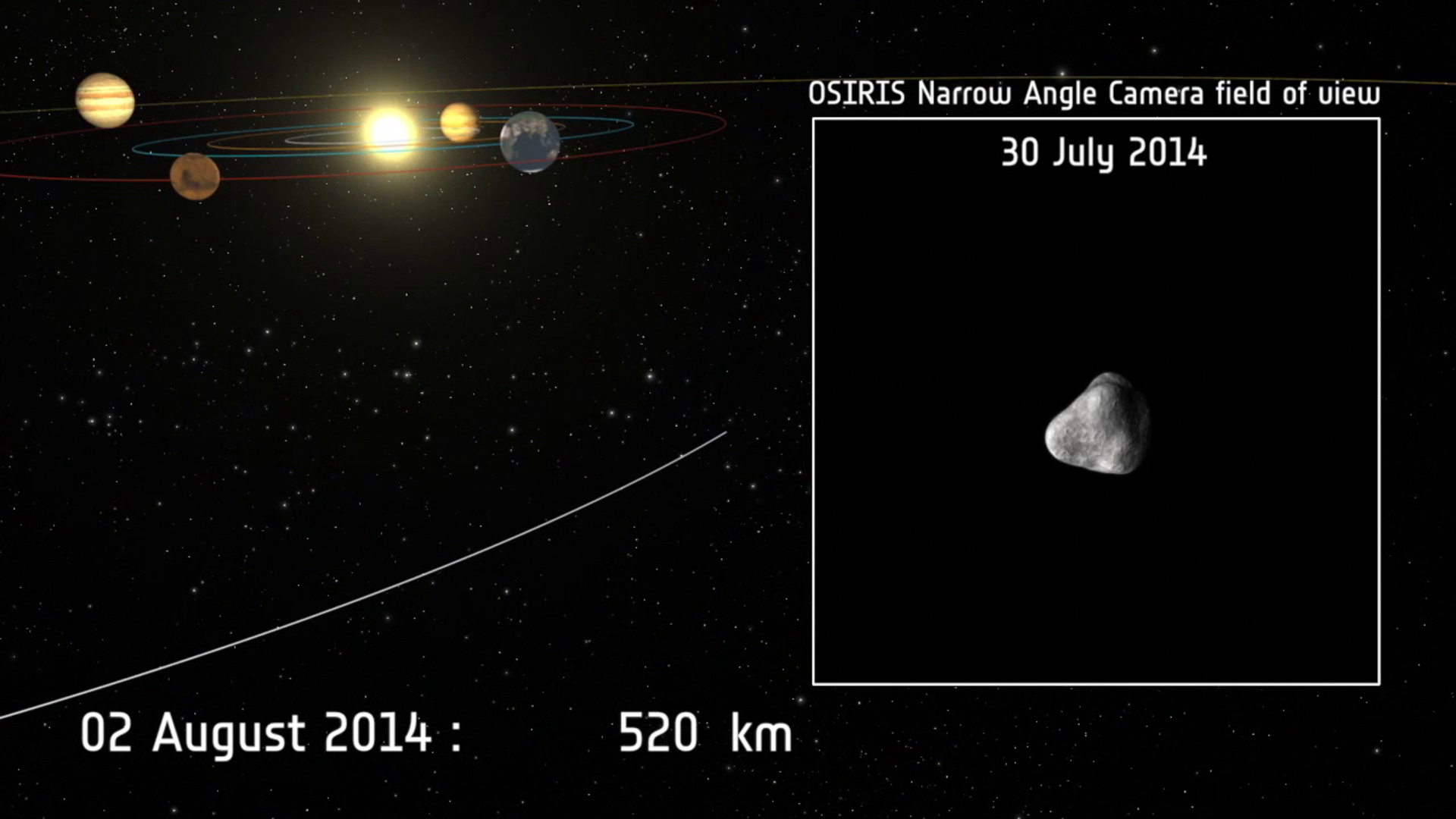 When can we see the comet?
Access the video

OSIRIS and the spacecraft’s dedicated navigation cameras will regularly acquire images over the coming weeks to help refine Rosetta’s trajectory in order to bring it steadily in line with the comet ahead of the rendezvous.

Currently, Rosetta is on a trajectory that would, if unchanged, take it past the comet at a distance of approximately 50 000 km and at a relative speed of 800 m/s. A critical series of manoeuvres beginning in May will gradually reduce Rosetta’s velocity relative to the comet to just 1 m/s and bring it to within 100 km by the first week of August.

Between May and August the 4 km-wide comet will gradually ‘grow’ in Rosetta’s field of view from appearing to have a diameter of less than one camera pixel to well over 2000 pixels – equivalent to a resolution of around 2 m per pixel – allowing the first surface features to be resolved.

These early observations will allow the rotation rate and the shape of the nucleus to be better understood, crucial for planning manoeuvres around the comet. An initial assessment of the comet’s activity will also be possible.

With OSIRIS re-activated in the first week of instrument commissioning, Rosetta’s 10 other science experiments, along with lander Philae, will provide the focus for the next months’ activities.

For an overview of the instrument commissioning schedule, and for regular status reports, visit the Rosetta blog.

Rosetta is an ESA mission with contributions from its member states and NASA. Rosetta’s Philae lander is provided by a consortium led by DLR, MPS, CNES and ASI. Rosetta will be the first mission in history to rendezvous with a comet, escort it as it orbits the Sun, and deploy a lander to its surface. Comets are time capsules containing primitive material left over from the epoch when the Sun and its planets formed. By studying the gas, dust, structure of the nucleus and organic materials associated with the comet, via both remote and in-situ observations, the Rosetta mission should become the key to unlocking the history and evolution of our Solar System, as well as answering questions regarding the origin of Earth’s water and perhaps even life.

The scientific imaging system OSIRIS was built by a consortium led by the Max Planck Institute for Solar System Research (Germany) in collaboration with CISAS, University of Padova (Italy), the Laboratoire d'Astrophysique de Marseille (France), the Instituto de Astrofísica de Andalucia, CSIC (Spain), the Research and Scientific Support Department of the European Space Agency, the Instituto Nacional de Técnica Aeroespacial (Spain), the Universidad Politéchnica de Madrid (Spain), the Department of Physics and Astronomy of Uppsala University (Sweden), and the Institute of Computer and Network Engineering of the TU Braunschweig (Germany).