ESA’s Rosetta mission has soft-landed its Philae probe on a comet, the first time in history that such an extraordinary feat has been achieved.

After a tense wait during the seven-hour descent to the surface of Comet 67P/Churyumov–Gerasimenko, the signal confirming the successful touchdown arrived on Earth at 16:03 GMT (17:03 CET).

The confirmation was relayed via the Rosetta orbiter to Earth and picked up simultaneously by ESA’s ground station in Malargüe, Argentina and NASA’s station in Madrid, Spain. The signal was immediately confirmed at ESA’s Space Operations Centre, ESOC, in Darmstadt, and DLR’s Lander Control Centre in Cologne, both in Germany.

The first data from the lander’s instruments were transmitted to the Philae Science, Operations and Navigation Centre at France’s CNES space agency in Toulouse.

“Our ambitious Rosetta mission has secured a place in the history books: not only is it the first to rendezvous with and orbit a comet, but it is now also the first to deliver a lander to a comet’s surface,” noted Jean-Jacques Dordain, ESA’s Director General.

“With Rosetta we are opening a door to the origin of planet Earth and fostering a better understanding of our future. ESA and its Rosetta mission partners have achieved something extraordinary today.”

“After more than 10 years travelling through space, we’re now making the best ever scientific analysis of one of the oldest remnants of our Solar System,” said Alvaro Giménez, ESA’s Director of Science and Robotic Exploration.

“Decades of preparation have paved the way for today’s success, ensuring that Rosetta continues to be a game-changer in cometary science and space exploration.”

“We are extremely relieved to be safely on the surface of the comet, especially given the extra challenges that we faced with the health of the lander,” said Stephan Ulamec, Philae Lander Manager at the DLR German Aerospace Center.

“In the next hours we’ll learn exactly where and how we’ve landed, and we’ll start getting as much science as we can from the surface of this fascinating world.”

Rosetta was launched on 2 March 2004 and travelled 6.4 billion kilometres through the Solar System before arriving at the comet on 6 August 2014.

“This success is testimony to the outstanding teamwork and the unique knowhow in operating spacecraft acquired at the European Space Agency over the decades.”

The landing site, named Agilkia and located on the head of the bizarre double-lobed object, was chosen just six weeks after arrival based on images and data collected at distances of 30–100 km from the comet. Those first images soon revealed the comet as a world littered with boulders, towering cliffs and daunting precipices and pits, with jets of gas and dust streaming from the surface.

Following a period spent at 10 km to allow further close-up study of the chosen landing site, Rosetta moved onto a more distant trajectory to prepare for Philae’s deployment.

Five critical go/no-go decisions were made last night and early this morning, confirming different stages of readiness ahead of separation, along with a final preseparation manoeuvre by the orbiter.

Deployment was confirmed at 09:03 GMT (10:03 CET) at a distance of 22.5km from the centre of the comet. During the seven-hour descent, which was made without propulsion or guidance, Philae took images and recorded information about the comet’s environment.

“One of the greatest uncertainties associated with the delivery of the lander was the position of Rosetta at the time of deployment, which was influenced by the activity of the comet at that specific moment, and which in turn could also have affected the lander’s descent trajectory,” said Sylvain Lodiot, ESA Rosetta Spacecraft Operations Manager.

“Furthermore, we’re performing these operations in an environment that we’ve only just started learning about, 510 million kilometres from Earth.”

Touchdown was planned to take place at a speed of around 1 m/s, with the three-legged landing gear absorbing the impact to prevent rebound, and an ice screw in each foot driving into the surface.

But during the final health checks of the lander before separation, a problem was detected with the small thruster on top that was designed to counteract the recoil of the harpoons to push the lander down onto the surface. The conditions of landing – including whether or not the thruster performed – along with the exact location of Philae on the comet are being analysed.

The first images from the surface are being downlinked to Earth and should be available within a few hours of touchdown. 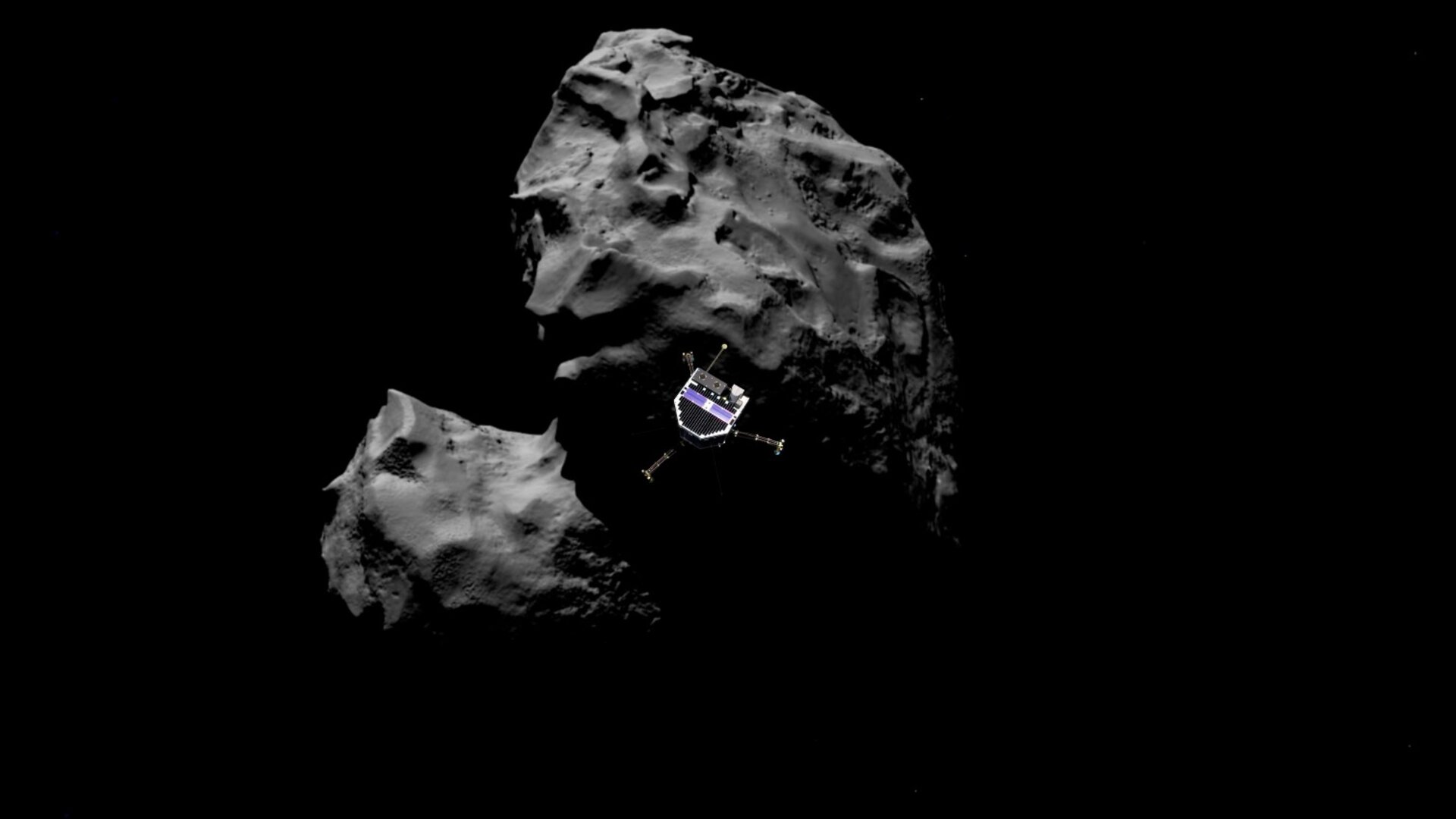 Over the next 2.5 days, the lander will conduct its primary science mission, assuming that its main battery remains in good health. An extended science phase using the rechargeable secondary battery may be possible, assuming Sun illumination conditions allow and dust settling on the solar panels does not prevent it. This extended phase could last until March 2015, after which conditions inside the lander are expected to be too hot for it to continue operating.

Science highlights from the primary phase will include a full panoramic view of the landing site, including a section in 3D, high-resolution images of the surface immediately underneath the lander, on-the-spot analysis of the composition of the comet’s surface materials, and a drill that will take samples from a depth of 23 cm and feed them to an onboard laboratory for analysis.

The lander will also measure the electrical and mechanical characteristics of the surface. In addition, low-frequency radio signals will be beamed between Philae and the orbiter through the nucleus to probe the internal structure.

The detailed surface measurements that Philae makes at its landing site will complement and calibrate the extensive remote observations made by the orbiter covering the whole comet.

“Rosetta is trying to answer the very big questions about the history of our Solar System. What were the conditions like at its infancy and how did it evolve? What role did comets play in this evolution? How do comets work?” said Matt Taylor, ESA Rosetta project scientist.

“Today’s successful landing is undoubtedly the cherry on the icing of a 4 km-wide cake, but we’re also looking further ahead and onto the next stage of this ground-breaking mission, as we continue to follow the comet around the Sun for 13 months, watching as its activity changes and its surface evolves.”

While Philae begins its close-up study of the comet, Rosetta must manoeuvre from its post-separation path back into an orbit around the comet, eventually returning to a 20 km orbit on 6 December.

Next year, as the comet grows more active, Rosetta will need to step further back and fly unbound ‘orbits’, but dipping in briefly with daring flybys, some of which will bring it within just 8 km of the comet centre.

The comet will reach its closest distance to the Sun on 13 August 2015 at about 185 million km, roughly between the orbits of Earth and Mars. Rosetta will follow it throughout the remainder of 2015, as they head away from the Sun and activity begins to subside.

“It’s been an extremely long and hard journey to reach today’s once-in-a-lifetime event, but it was absolutely worthwhile. We look forward to the continued success of the great scientific endeavour that is the Rosetta mission as it promises to revolutionise our understanding of comets,” said Fred Jansen, ESA Rosetta mission manager.

Rosetta is an ESA mission with contributions from its Member States and NASA. Rosetta’s Philae lander is provided by a consortium led by DLR, MPS, CNES and ASI. Rosetta is the first mission in history to rendezvous with a comet. It is escorting the comet as they orbit the Sun together, and has deployed a lander to its surface.Comets are time capsules containing primitive material left over from the epoch when the Sun and its planets formed. By studying the gas, dust and structure of the nucleus and organic materials associated with the comet, via both remote and in situ observations, the Rosetta mission should become the key to unlocking the history and evolution of our Solar System.

Today, it develops and launches satellites for Earth observation, naviga-tion, telecommunications and astronomy, sends probes to the far reaches of the Solar System and cooperates in the human exploration of space.