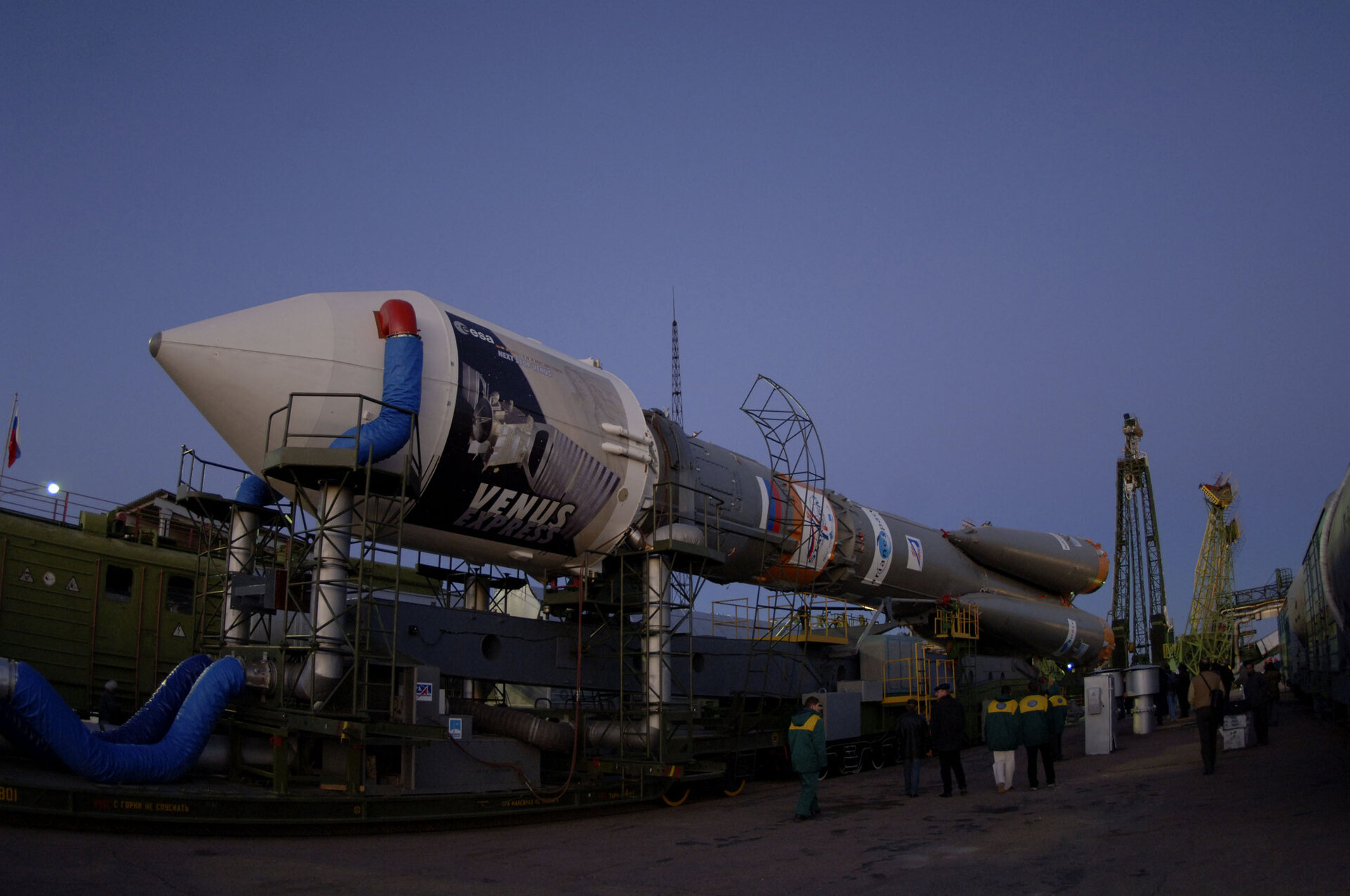 The roll-out of the Soyuz launcher carrying ESA’s Venus Express spacecraft, to launch pad number 6 of the Baikonur Cosmodrome, Kazakhstan, took place at the weekend.

On Friday, the final integration of the Soyuz launch vehicle with Venus Express had taken place in the Integration Building. The launch vehicle and its payload were then fully assembled and ready for the roll-out to the launch pad planned for Saturday morning (local time).

The spacecraft, including its pyrotechnic devices and propulsion equipment, was then fully armed and ready for flight, and from then on there would be no more physical access to the spacecraft.

The Russian State Commission had been held at 19:30 on Friday. All involved parties (e.g. spacecraft, Soyuz launcher, Fregat upper stage, range safety, pad operations, meteorology, etc.) had confirmed their readiness, and roll-out and installation of the launcher on the pad had been authorised to commence in the morning.

Final preparations of the activity started in the very early morning hours of 5 November, and included the disconnection of the umbilical connector from the rocket.

The Soyuz rocket was installed in horizontal position on the Transport and Erector Wagon (TEW). This wagon also carries the air-conditioning equipment for the control of cleanliness and temperature under the payload fairing. The wagon was slowly pulled through the exit doors of the Integration Building by a diesel locomotive and commenced its short journey to the launch pad.

After disconnection of the fairing air-conditioning system, the hydraulic system of the TEW was used to tilt the rocket into vertical position, and the Russian specialist team secured the launcher on the four support arms of the pad which carry virtually all the weight of the unfuelled launcher.

Following the installation of the launcher on the pad, the access platforms were closed, enabling physical access to the rocket via a system of platforms and a lift at different levels.

The fairing air-conditioning system was reconnected, to guarantee proper environmental conditions for the Venus Express spacecraft. The Russian teams need access up to just 45 minutes from launch (to connect and disconnect hoses for propellant loading).

On Sunday morning, 6 November, the countdown team arrived at the Venus Express bunker next to the launch pad. Preparations of all bunker equipment were performed, and the final switch-on of the spacecraft was done at 06:00 UT.

In the course of the day the so-called ‘pre-launch sequence’ was carried out. The flight control team at ESOC performed ‘listen-in’ tests to verify that the ground equipment at ESOC is capable of receiving telemetry through the data links between the bunker in Baikonur and the Mission Operations Centre at ESOC.

The flight control team at ESOC will use these links to follow the final preparations of the spacecraft during Monday’s dress rehearsal, as well as during the actual launch countdown.