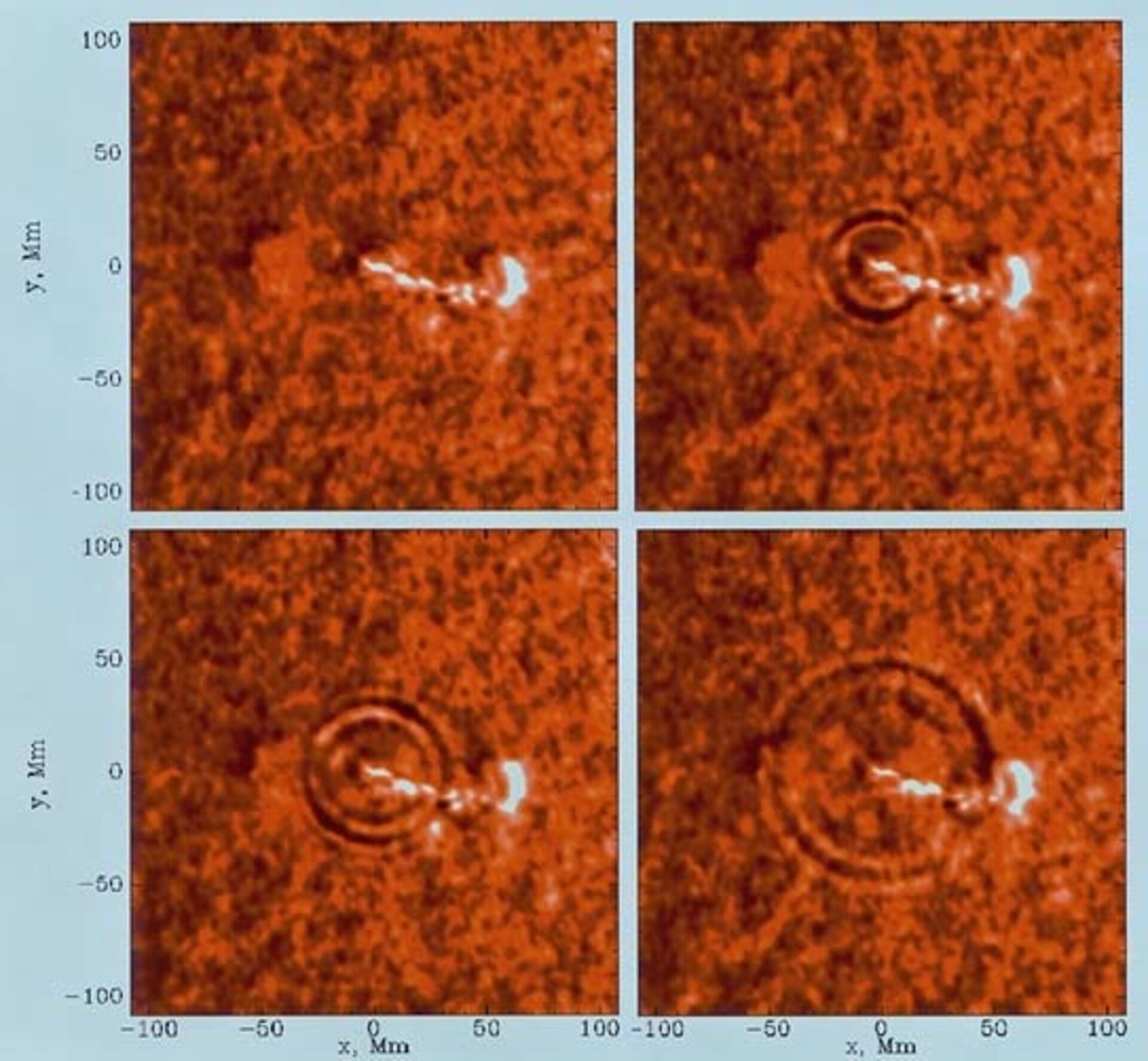 Using data from ESA's Soho spaceborne observatory, scientists have shown for the first time that solar flares produce seismic waves in the Sun's interior that closely resemble those created by Earthquakes on our planet. The researchers observed a flare-generated solar quake that contained about 40000 times the energy released in the great earthquake that devastated San Francisco in 1906. The amount of energy released was enough to power the United States for 20 years at its current level of consumption, and was equivalent to an 11.3-magnitude earthquake, scientists calculated. Dr. Alexander Kosovichev, a senior research scientist from Stanford University (USA) and Dr. Valentina. Zharkova of Glasgow University (UK) found the tell-tale seismic signature in data on the Sun's surface collected by Soho's Michelson Doppler Imager (MDI) immediately following a moderate-sized flare on 9 July 1996. The finding is reported in the 28 May 1998 issue of the journal Nature. Over the course of an hour, the solar waves travelled a distance equal to 10 Earth diameters before fading into the fiery background of the Sun's photosphere. The waves accelerated from an initial speed of 35000 km/h to a maximum of 400000 km/h before disappearing. According to the currently accepted model of solar flares, the primary explosion creates high-energy electrons. These are funnelled down into a magnetic flux tube, and produce X-rays, microwaves and a shock wave that heats the solar surface. Kosovichev and Zharkova developed a theory that predicts the nature and magnitude of the shock waves that this beam of energetic electrons should create when they slam down into the solar atmosphere. Although their theory directed them to the right area to search for the seismic waves, the waves that they found were 10 times stronger than they had predicted. 'They were so strong that you can see them in the raw data,' Kosovichev says. The solar seismic waves appear to be compression waves like the 'P' waves generated by an Earthquake. They travel throughout the Sun's interior. In fact, the waves should recombine on the opposite side of the Sun from the location of the flare to create a faint duplicate of the original ripple pattern, Kosovichev predicts. The ESA/NASA Soho spacecraft was launched on 2 December 1995 [Image Date: 09-07-96] [98.10.006-001]