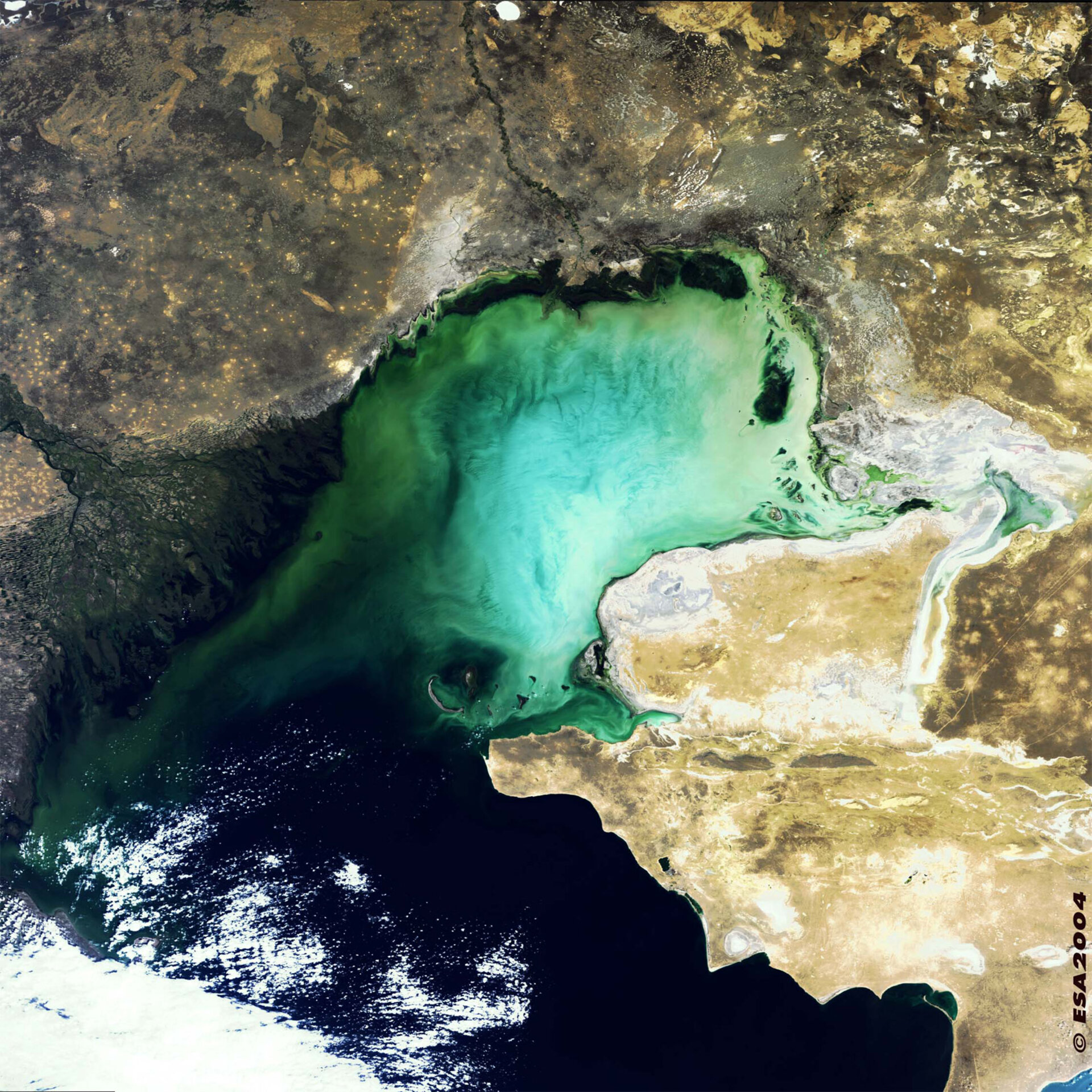 The shallow northern section of the Caspian Sea is shown in this Envisat image. Variously classed as an enormous lake or the smallest full-fledged sea, the Caspian is the largest landlocked water body in the world, with a surface area of 371 000 square kilometres.

The Caspian Sea is bordered by Russia, Azerbaijan, Iran, Turkmenistan and Kazakhstan. Stretching 1200 km from north to south, the almost-tide-free Caspian Sea fills a deep depression between Europe and Asia, its water level reaching around 28 metres below global ocean level. Its waters are not freshwater but salty – although only about a third as much as true seawater. Its salinity is an inheritance from its origin as a remnant of the ancient Tethys Sea.

The northern part of the Caspian Sea is the most shallow, averaging about 10 metres deep, although its depth can shift by up to two metres, depending on variations in river flow and wind-driven currents. It appears bright blue here, probably due to a mixture of plant life and sediment stirred up by moving water.

This part of the Sea is also the location of vast oil and gas reserves, and the subject of major exploration and exploitation efforts, centred on the town of Atyrau at the mouth of the Ural River.

Around 130 rivers discharge into the Caspian, supplying around 300 cubic kilometres of freshwater annually. The two most significant rivers are both visible here. The Delta of the Volga River is visible in the left part of the image, while the Ural River can be seen flowing down from the image top centre. The Volga River is the longest in Europe, draining 20% of European land area and supplying 80% of the Caspian's freshwater inflow. The Ural River supplies 5% of its inflow.

The Sea's enclosed nature has enabled the preservation of some unique animals and plants. It also means that pollutants from industry and agriculture are concentrated within its brackish waters, threatening what are otherwise rich fisheries: the Caspian Sea is home to 85% of the world's stock of sturgeon and is the source of 90% of all black caviar. The Russian city of Astrakhan, located on the Volga Delta, remains at the centre of the caviar trade.

Along with increasing pollution, the Caspian Sea has also seen its water level fluctuate in past decades, at least partly due to human activity. As dams were constructed on rivers feeding the Sea its water level fell during the 1960s and 1970s, leading to construction on newly exposed shorelines. But since the late 1970s the water level began to rise again and has now risen by around 2.5 metres. Today it has stabilised and may even be falling again.

This image was acquired by the Medium Resolution Imaging Spectrometer (MERIS) instrument on Envisat on 22 September 2003, working in full resolution mode at 300 metre resolution.