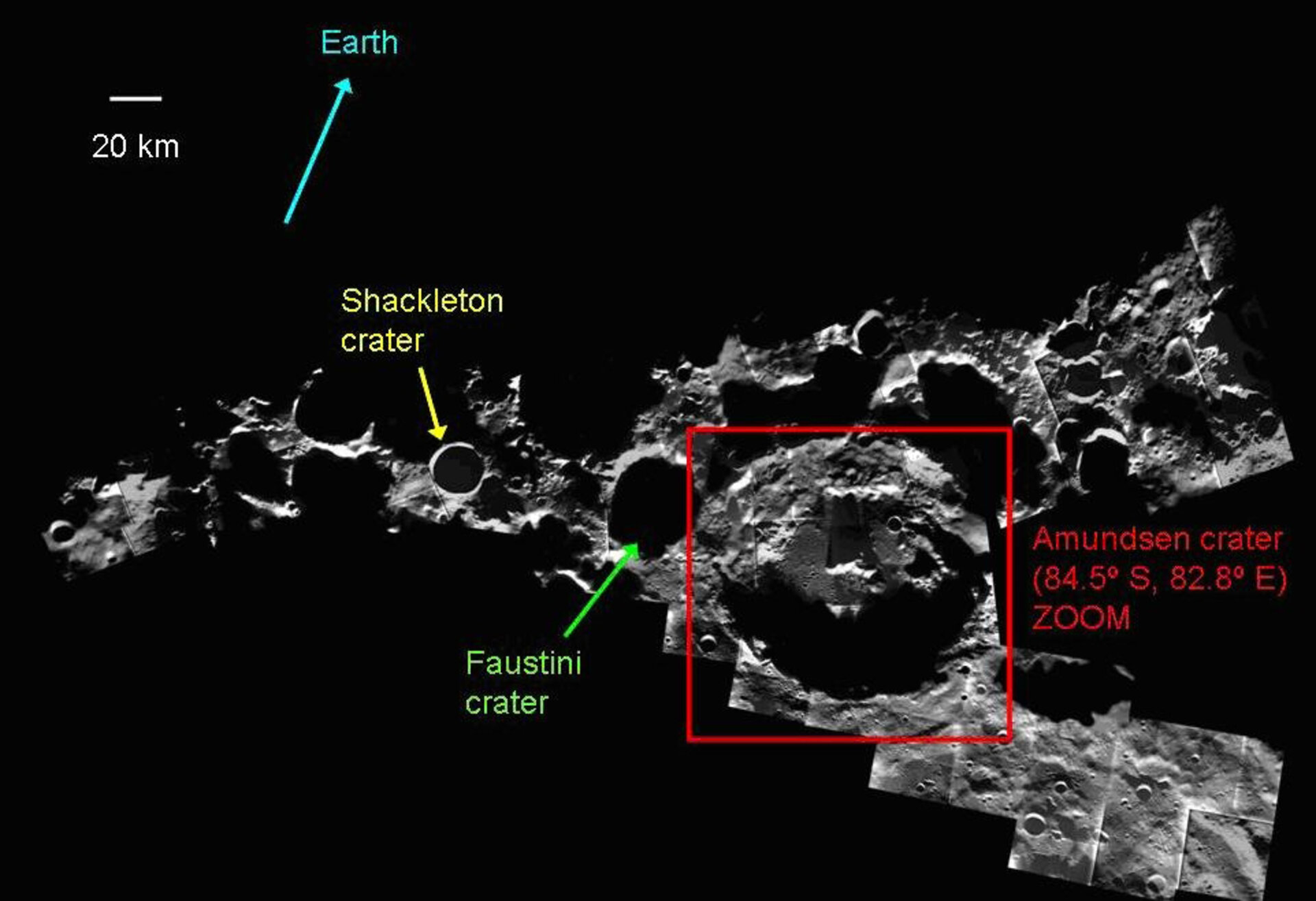 This mosaic of the lunar south pole was obtained with images taken by the Advanced Moon Imaging Experiment (AMIE) on board ESA's SMART-1. The pictures were taken between Dec 2005 and March 2006, during the lunar southern summer. The mosaic, composed of about 40 images, covers an area of about 500 by 150 km. The lunar near-side facing Earth is at the top of the map, while the far-side is at the bottom. A number of interesting lunar craters are indicated:

Shackleton, visible left-centre of the mosaic, is the crater which contains the lunar south pole within its rim. It is nearly circular (about 19 km across, centered at 89.9° south, 0.0° east), with a clear rim and a relatively flat crater floor marked by smaller craters inside. The southern part of its interior is permanently in shadow, making it difficult to image, but it is expected to be bowl-shape due to its modest size. It was named after the British polar explorer Ernest Shackleton.

Faustini, in the centre of the mosaic (87.3° south, 77.0° east), is a crater about 39 km across. The Lunar Prospector mission found that this crater has a higher-than-normal concentration of hydrogen. It was named after the Italian polar geographer explorer Arnaldo Faustini (1872-1944).

Shoemaker crater has been named after the geologist whose ashes were on board the Lunar Prospector spacecraft that impacted on the crater floor. 50 km in diameter, the crater is centred at 89.9° south, 0.0° east and is located between the Shackleton and Faustini craters. Lunar Prospector found that this crater has a higher-than-normal concentration of hydrogen. On July 1999, the mission crashed into the crater to create a plume of water vapor, but no detection was reported.

De Gerlache crater (diameter 32 km, centered at 88.5° south, 87.1° west) is located near Shackleton crater. Its floor is permanently shadowed. On the SMART-1 AMIE mosaic an illuminated saddle can be seen, bridging its rim to Shackleton. The crater is named after Adrien de Gerlache (1866, 1934), the Belgian antarctic explorer.

Amundsen is a large impact crater, about 105 km across, located along the southern lunar limb (84.5° south, 82.8° east), with its rim situated 110 km from the south pole. From Earth, this crater is viewed nearly from the side, illuminated by oblique sunlight. The crater rim is slightly distended along the southern edge, and the terraced surface is asymmetrical. Central peaks, that were formed from the rebound of the crust after the impact are quite apparent with their shadow projected over the flat floor.