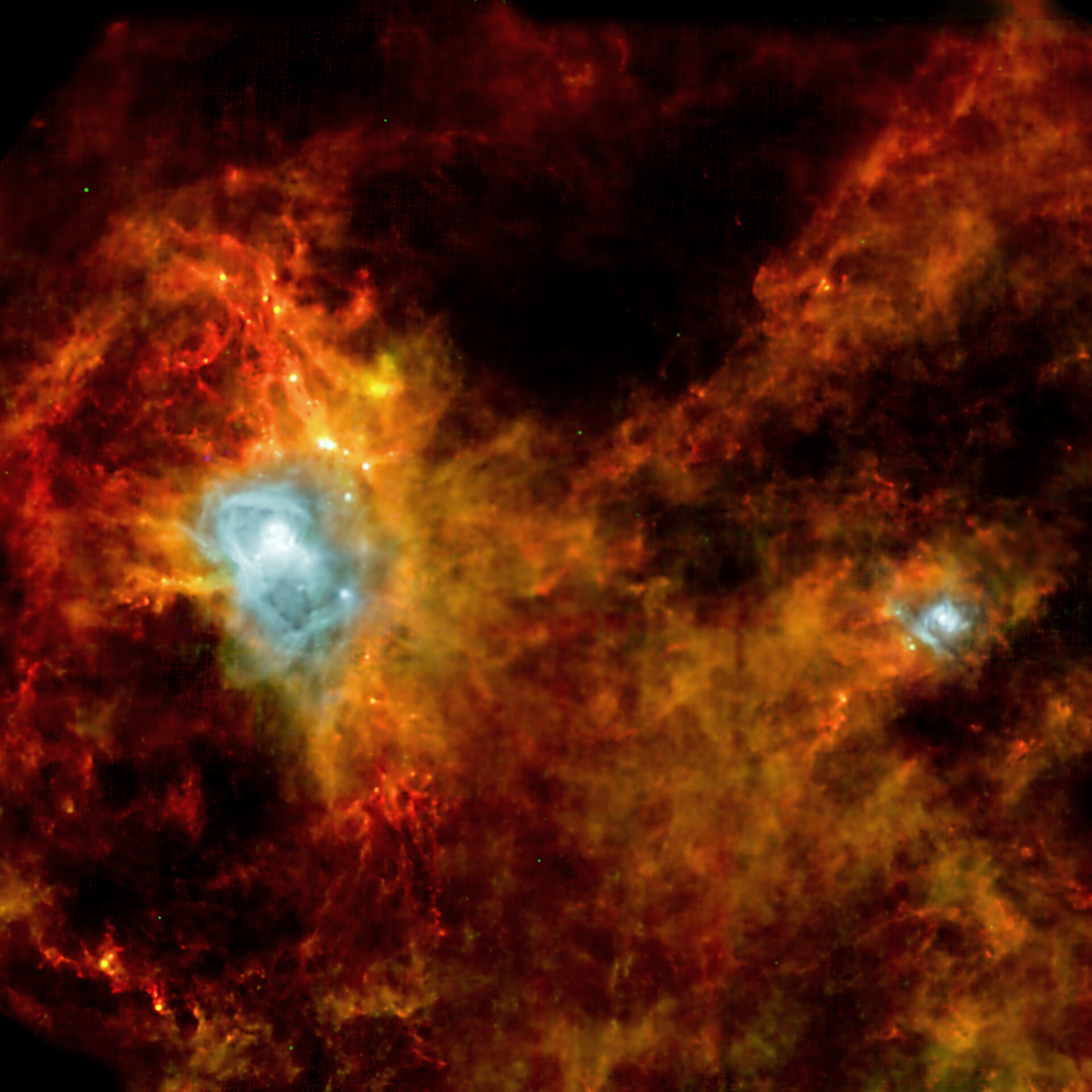 Inside the dark heart of the Eagle

An unseen stellar nursery comes into view in this Herschel image. Some 700 newly-forming stars are estimated to be crowded into these colourful filaments of dust. The complex is part of a mysterious ring of stars called Gould’s Belt.

This image shows a dark cloud 1000 light-years away in the constellation Aquila, the Eagle. It covers an area 65 light-years across and is so shrouded in dust that no previous infrared satellite has been able to see into it. Now, thanks to Herschel’s superior sensitivity at the longest wavelengths of infrared, astronomers have their first picture of the interior of this cloud.

It was taken on 24 October 2009 using two of Herschel’s instruments: the Photodetector Array Camera and Spectrometer (PACS) and the Spectral and Photometric Imaging Receiver (SPIRE). The two bright regions are areas where large newborn stars are causing hydrogen gas to shine.

Embedded within the dusty filaments are 700 condensations of dust and gas that will eventually become stars. Astronomers estimate that about 100 are protostars, celestial objects in the final stages of formation. Each one just needs to ignite nuclear fusion in its core to become a true star. The other 600 objects are insufficiently developed to be considered protostars, but these too will eventually become another generation of stars.

This cloud is part of Gould’s Belt, a giant ring of stars that circles the night sky – the Solar System just happens to lie near the centre of the belt. For more than a hundred years, astronomers have puzzled over the origin of this ring, which is tilted to the Milky Way by 20º. The first to notice this unexpected alignment, in the mid-19th century, was England’s John Herschel, the son of William, after whom ESA’s Herschel telescope is named. But it was Boston-born Benjamin Gould who brought the ring to wider attention in 1874.

Gould’s Belt supplies bright stars to many constellations such as Orion, Scorpius and Crux, and conveniently provides nearby star-forming locations for astronomers to study. Observing these stellar nurseries is a key programme for Herschel, which aims to uncover the demographics of star formation and its origin, or in other words, the quantities of stars that can form and the range of masses that such newborn stars can possess. Apart from this region of Aquila, Herschel will target 14 other star-forming regions as part of the Gould’s Belt Key Programme.