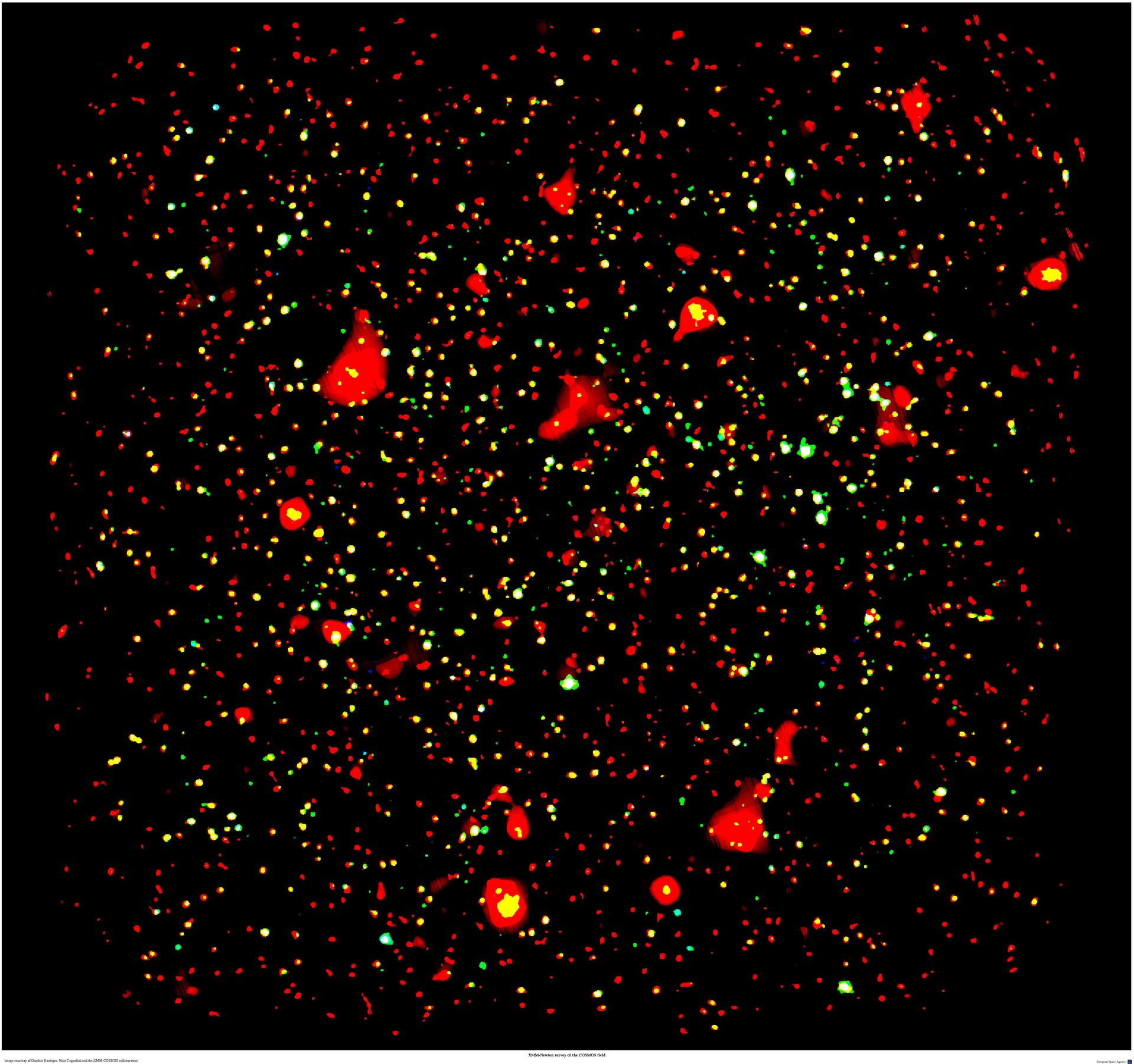 An X-ray view of the COSMOS field

When we gaze up at the night sky, we are only seeing part of the story. Unfortunately, some of the most powerful and energetic events in the Universe are invisible to our eyes – and to even the best optical telescopes.

Luckily, these events are not lost; they appear vividly in the high-energy sky, making them visible to space-based telescopes like ESA's XMM-Newton, which observes the Universe in the X-ray part of the spectrum.

This image shows a patch of sky from the COSMOS survey, as viewed by XMM-Newton. COSMOS is a project studying how galaxies form and evolve, gathering observations using a variety of ground- and space-based telescopes. This image alone features about two thousand supermassive black holes, and over a hundred clusters of galaxies.

Small point sources dotted across the frame show supermassive black holes that are hungrily devouring matter from their surroundings. All massive galaxies host a black hole at their core, but not all of these are actively accreting, dragging in surrounding matter and releasing high-energy radiation and powerful jets in the process. As they are so energetic, one of the best ways to hunt these extreme bodies is by using X-ray telescopes.

The larger blobs in this image, mainly red and yellow, reveal another class of cosmic behemoths: galaxy clusters. Containing up to several thousand galaxies, galaxy clusters are the largest cosmic structures to be held together by gravity. The galaxies within these clusters are enveloped by hot gas, which releases a diffuse X-ray glow that can be detected by telescopes like XMM-Newton.

The image combines data collected by the EPIC instrument on board XMM-Newton at energies from 0.5 to 2 keV (shown in red), 2 to 4.5 keV (shown in green) and 4.5 to 10 keV (shown in blue). The observations were taken between 2003 and 2005, and the image spans 1.4 degrees on each side, corresponding to almost three times the diameter of the full Moon.

This image was first published in the paper “The XMM-Newton Wide-Field Survey in the COSMOS Field. I. Survey Description” by G. Hasinger et al. in 2007.