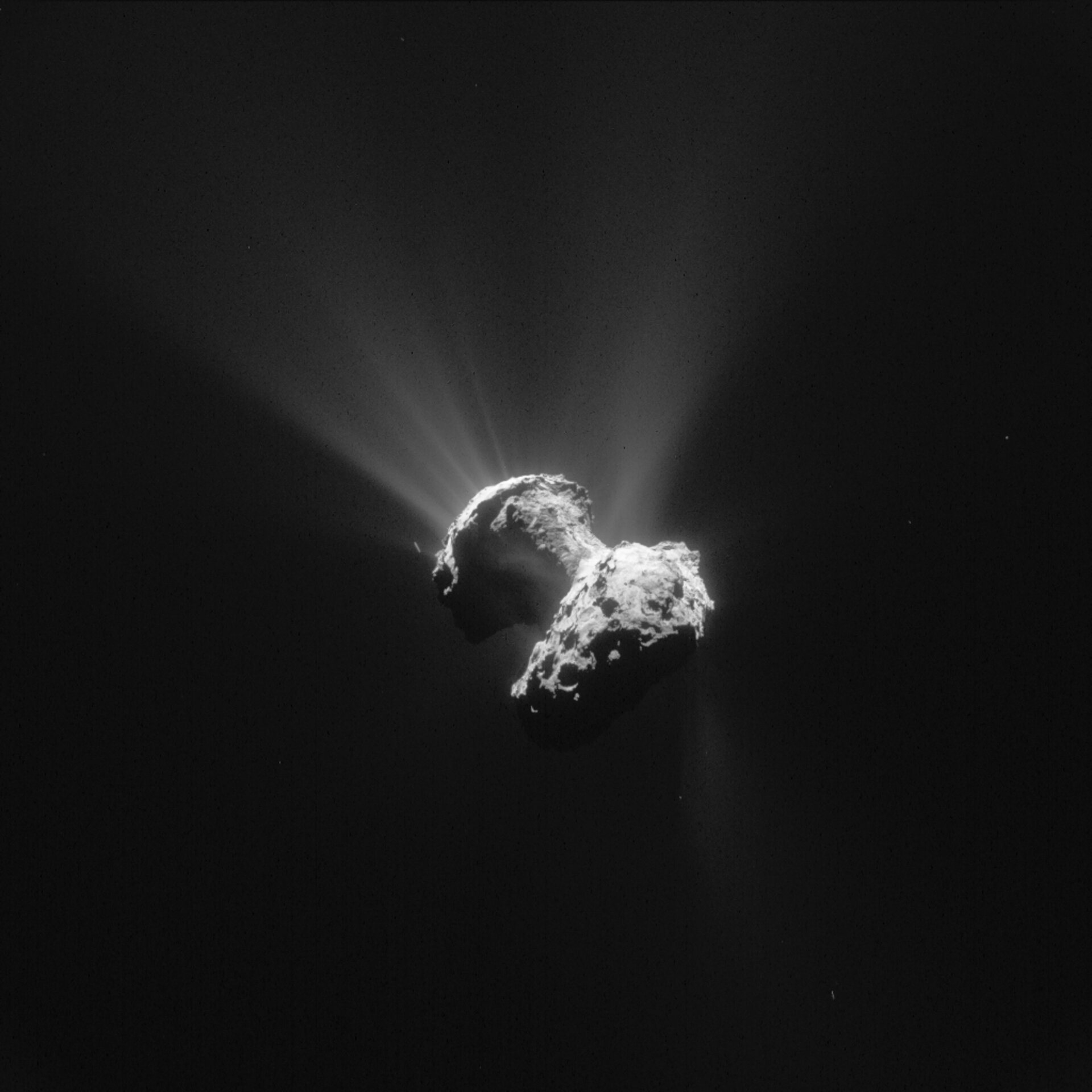 On 13 August 2015, Comet 67P/Churyumov–Gerasimenko will reach its closest point to the Sun along its 6.5-year long orbit. It will be around 185 million km from the Sun at ‘perihelion’, between the orbits of Earth and Mars.

ESA’s Rosetta mission reached the comet on 6 August 2014, and has been accompanying it ever since, monitoring the evolution of the nucleus and its surrounding atmosphere, or coma.

The nucleus is a mixture of frozen ices and dust. As the comet approaches the Sun, solar light warms its surface, causing the ices to boil away. This gas streams away carrying along large amounts of dust, and together they build up the coma.

This image was obtained with Rosetta’s navigation camera on 21 June 2015, when the spacecraft was 177 km from the comet centre.

Parts of the nucleus are lit by sunlight, revealing the variety of terrains that are found on this curious object. The diffuse luminosity, produced by the comet’s activity, is visible all around the nucleus, but appears especially striking in the upper part of the image.

The small lobe of this oddly shaped comet, visible at the top left in this orientation, is crowned by several jets of outflowing material, streaming into space from the surface.

Signs of activity are also visible around the ‘neck’ region that connects the two lobes, set against cliffs that are cast in shadow.

The comet’s large lobe, to the bottom right, reveals the rich morphology of the nucleus, with rugged terrains, circular features and smoother portions punctuated by boulders.

Rosetta will keep observing how the comet’s activity evolves in the lead up to perihelion, and for a full year after that, until the end of the mission in September 2016.

This image is published for the first time in today's CometWatch on the Rosetta blog.

This work is licensed under the Creative Commons Attribution-ShareAlike 3.0 IGO (CC BY-SA 3.0 IGO) licence. The user is allowed to reproduce, distribute, adapt, translate and publicly perform this publication, without explicit permission, provided that the content is accompanied by an acknowledgement that the source is credited as 'ESA - European Space Agency’, a direct link to the licence text is provided and that it is clearly indicated if changes were made to the original content. Adaptation/translation/derivatives must be distributed under the same licence terms as this publication. The user must not give any suggestion that ESA necessarily endorses the modifications that you have made. No warranties are given. The licence may not give you all of the permissions necessary for your intended use. For example, other rights such as publicity, privacy, or moral rights may limit how you use the material. Any of the above conditions can be waived if you get permission from ESA. To view a copy of this licence, please visit http://creativecommons.org/licenses/by-sa/3.0/igo