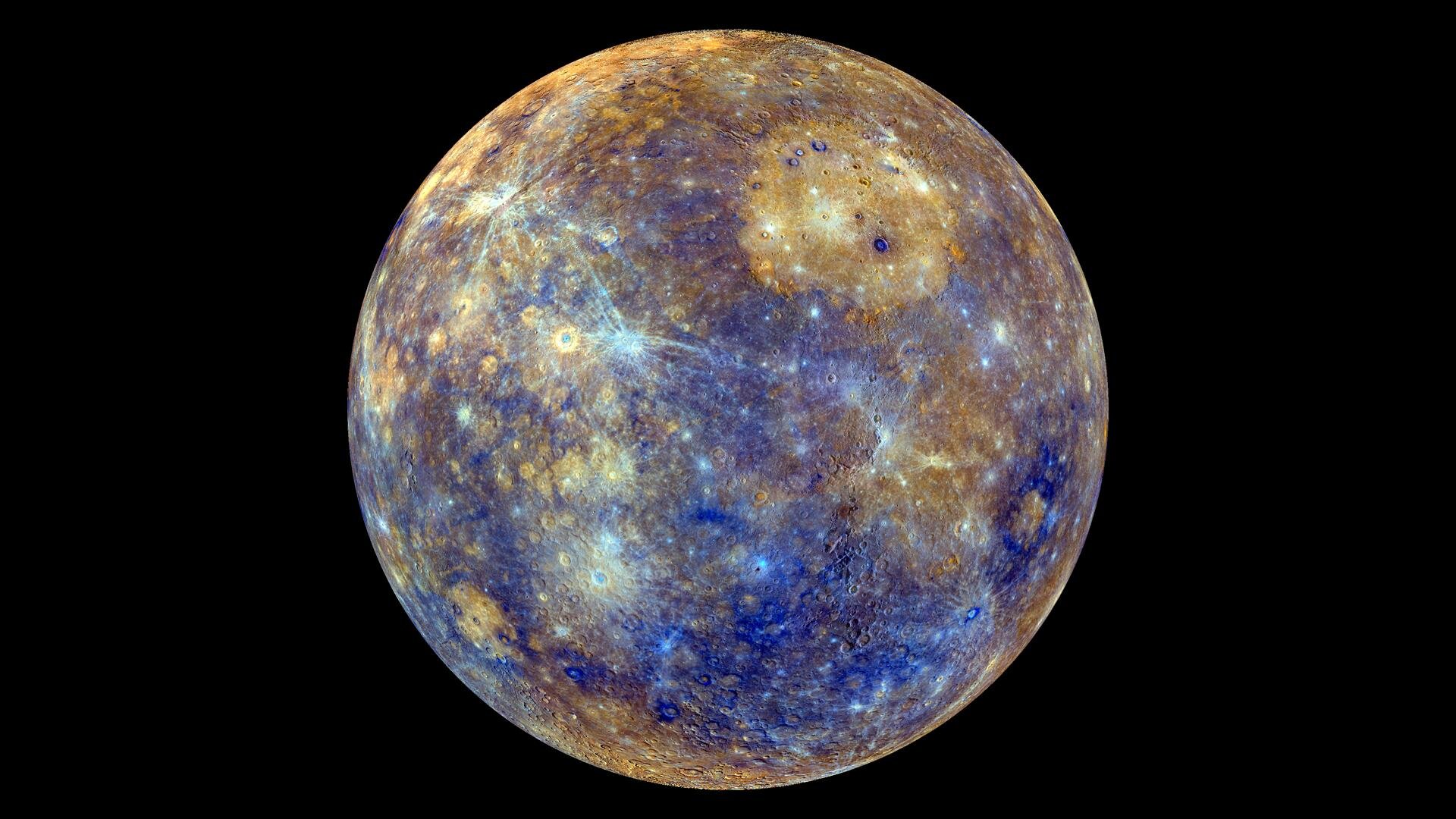 To the human eye, Mercury may resemble a dull, grey orb but this enhanced-colour image from NASA’s Messenger probe, tells a completely different story. Swathes of iridescent blue, sandy-coloured plains and delicate strands of greyish white, create an ethereal and colourful view of our Solar System’s innermost planet.

These contrasting colours have been chosen to emphasise the differences in the composition of the landscape across the planet. The darker regions exhibit low-reflectance material, particularly for light at redder wavelengths. As a result, these regions take on a bluer cast.

The criss-crossing streaks across the disc of the planet show up in shades of light blue, grey and white. These regions take on a light blue hue for a different reason: their youthfulness. As material is exposed to the harsh space environment around Mercury it darkens, but these pale ‘rays’ are formed from material excavated from beneath the planet’s surface and sent flying during comparatively recent impacts. For this reason, they have retained their youthful glow.

The yellowish, tan-coloured regions are “intermediate terrain”. Mercury also hosts brighter and smoother terrain known as high-reflectance red plains. One example can be seen towards the upper right, where there is a prominent patch that is roughly circular. This is the Caloris basin, an impact crater thought to have been created by an asteroid collision during the Solar System’s early days.

On 30 April this year, Messenger’s four-year stint in orbit around Mercury came to an end when the probe ploughed into the surface. Messenger was launched in 2004 and in 2011 became the first spacecraft ever to orbit Mercury. It ended up exceeding its planned mission timeline by three years, by which time the spacecraft had completely depleted its fuel. The last of the fuel was used to position it within the gravitational pull of Mercury and the Sun, so it could delay as long as possible its inevitable plummet towards the surface – while continuing to beam back images – and go out with a bang.

The investigation of mysterious Mercury will be continued by ESA’s BepiColombo, due for launch in 2017. BepiColombo, a mission in partnership with the Japan Aerospace Exploration Agency (JAXA), comprises two orbiters, ESA’s Mercury Planetary Orbiter and JAXA’s Mercury Magnetospheric Orbiter, which will reach Mercury together in 2024. BepiColombo aims to gain an in-depth view of our Solar System’s least-explored terrestrial planet.