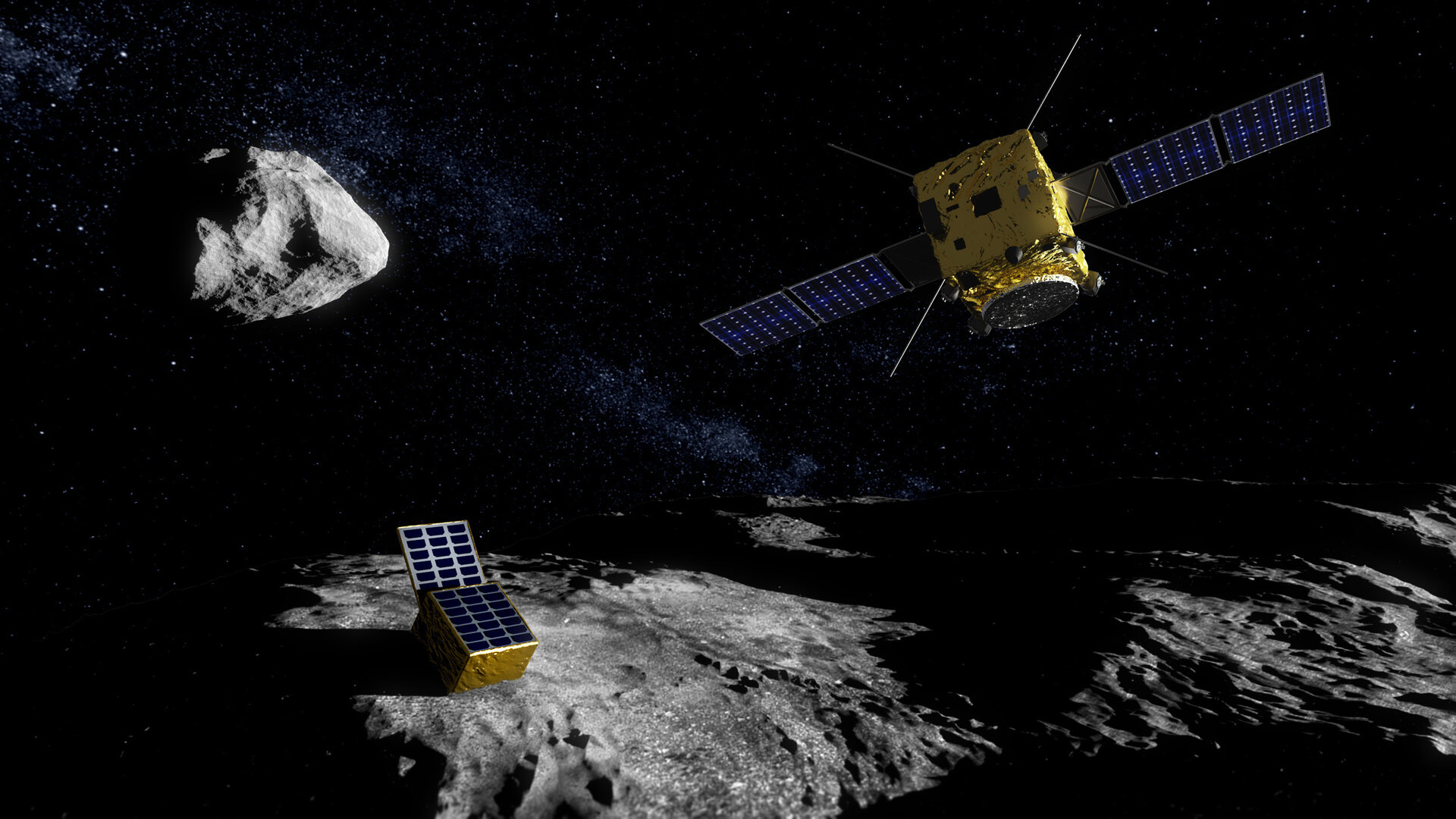 Landing on an asteroid

This is the microlander that ESA’s proposed Asteroid Impact Mission would put down on its target asteroid.

The asteroid body in question is just 170 m in diameter – the smaller body of the binary Didymos system – so roughly the same size as the Great Pyramid of Giza. It orbits just 1.2 km above the larger 800-m diameter primary Didymos asteroid (shown in the background here), to complete a circuit every 12 hours.

Around the size of a microwave oven, the microlander would be ESA’s first lander on a small body since Rosetta’s Philae lander touched down on Comet 67P/Churyumov–Gerasimenko in November 2014.

The asteroid lander, named Mobile Asteroid Surface Scout-2 (Mascot-2), is under study by the German Aerospace Center DLR. Mascot-1 is a lander already on board Japan's Hayabusa 2 mission, which was launched on 3 December 2014 to reach its target asteroid in 2018.

Like its predecessor, Mascot-2 would carry a compact wide-angle camera and a radiometer for close-up examination of the asteroid surface.

In addition, Mascot-2 would be equipped with a low-frequency radar to help probe the interior of the asteroid it rests on – with AIM picking up the radar signals from the asteroid’s far side. Accelerometers will record full details of its impact with the surface, while solar panels should give the micro-lander at least three months of working life.

AIM, currently undergoing detailed design work in preparation for a ‘go/no go’ decision at the end of this year, would be humanity’s first mission to a double asteroid system.

NASA’s own Double Asteroid Redirection Test probe, or DART, will impact the same asteroid, with AIM providing detailed before-and-after mapping to help assess the effects and test planetary defence techniques. The two missions together are known as the Asteroid Impact and Deflection Assessment (AIDA) mission.

ESA has teamed up with the organisers of the annual Asteroid Day on 30 June to increase public awareness of potential asteroid impacts with Earth, and the importance of increasing our knowledge about these small bodies.