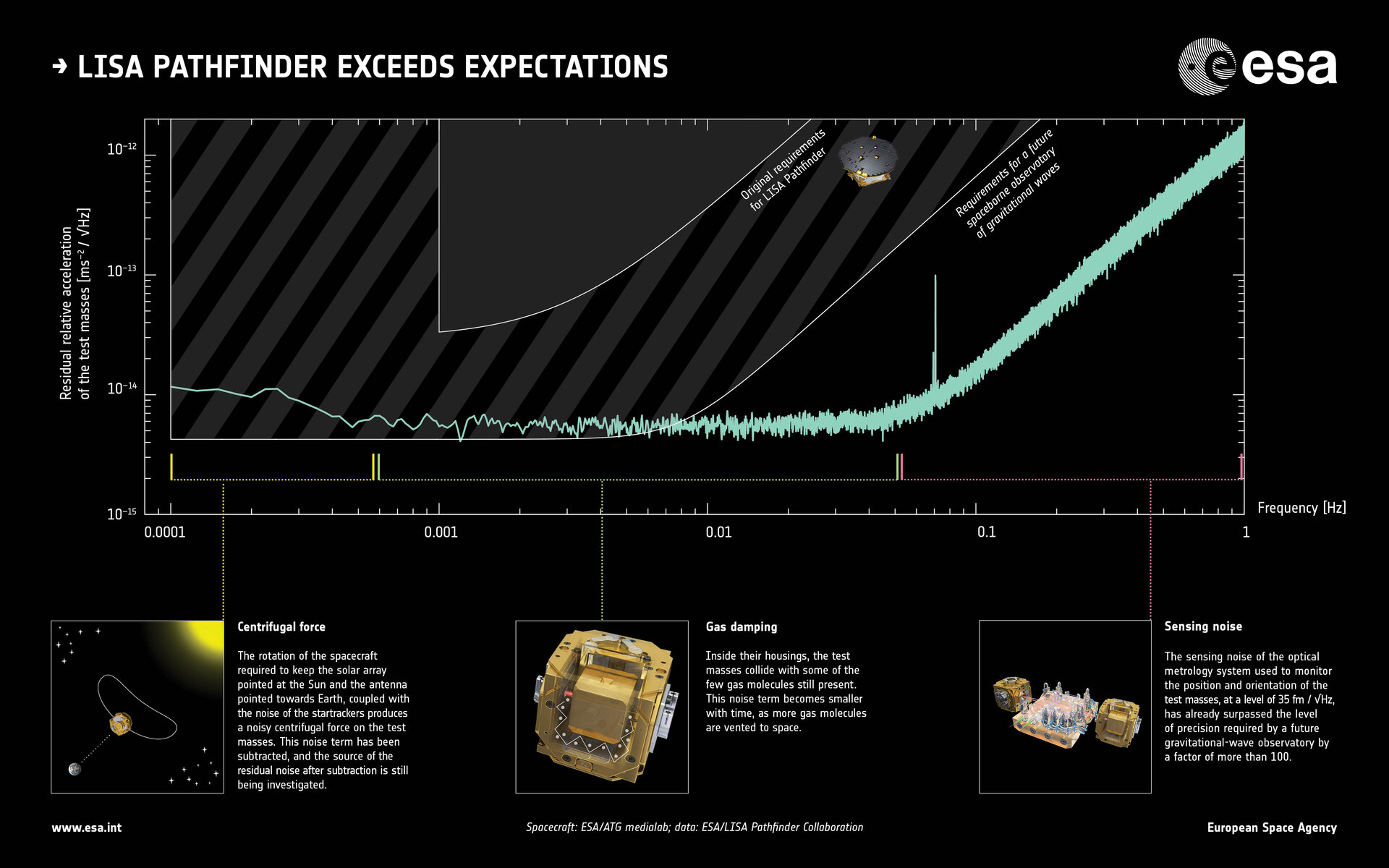 Results based on just two months of science operations on ESA’s LISA Pathfinder show that the mission has demonstrated the technology needed to build a space-based gravitational wave observatory.

At the heart of the spacecraft, two identical, 2 kg, 46 mm gold–platinum cubes are falling freely through space under the influence of gravity alone, unperturbed by other external forces, to a precision more than five times better than originally required.

The two cubes are almost motionless with respect to each other, with a relative acceleration lower than ten millionths of a billionth of Earth’s gravitational acceleration, g. The LISA Pathfinder team measured the remaining forces acting on the test masses, and identified three main sources of noise, depending on the frequency.

At the lowest frequencies probed by the experiment, below 1 mHz (on the left in this graph), the scientists measured a small centrifugal force acting on the cubes. This is caused by a combination of the shape of LISA Pathfinder’s orbit and the effect of the noise in the signal of the startrackers used to orient it.

The contribution of the centrifugal force to the relative acceleration of the two test masses has been subtracted in this graph, and the source of the residual noise after subtraction is still being investigated.

At frequencies of 1–60 mHz (at the centre), control over the test masses is limited by gas molecules bouncing off the cubes: a small number of them remain in the surrounding vacuum. This effect was seen to be reducing as more molecules were vented into space, and is expected to improve in the following months.

At higher frequencies, between 60 mHz and 1 Hz (on the right), LISA Pathfinder’s precision is limited only by the sensing noise of the optical metrology system used to monitor the position and orientation of the test masses. Nevertheless, the performance of this system has already surpassed the level of precision required by a future gravitational-wave observatory by a factor of more than 100. The cause of the spike around 70 mHz is still under investigation.

Placing test masses in the purest freefall ever achieved is crucial to building a spaceborne observatory of gravitational waves – these are oscillations in the fabric of spacetime, moving at the speed of light and caused by the acceleration of massive objects.

The demonstration of the LISA Pathfinder’s key technologies opens the door to the development of a large space observatory capable of detecting gravitational waves emanating from a wide range of exotic objects in the Universe.