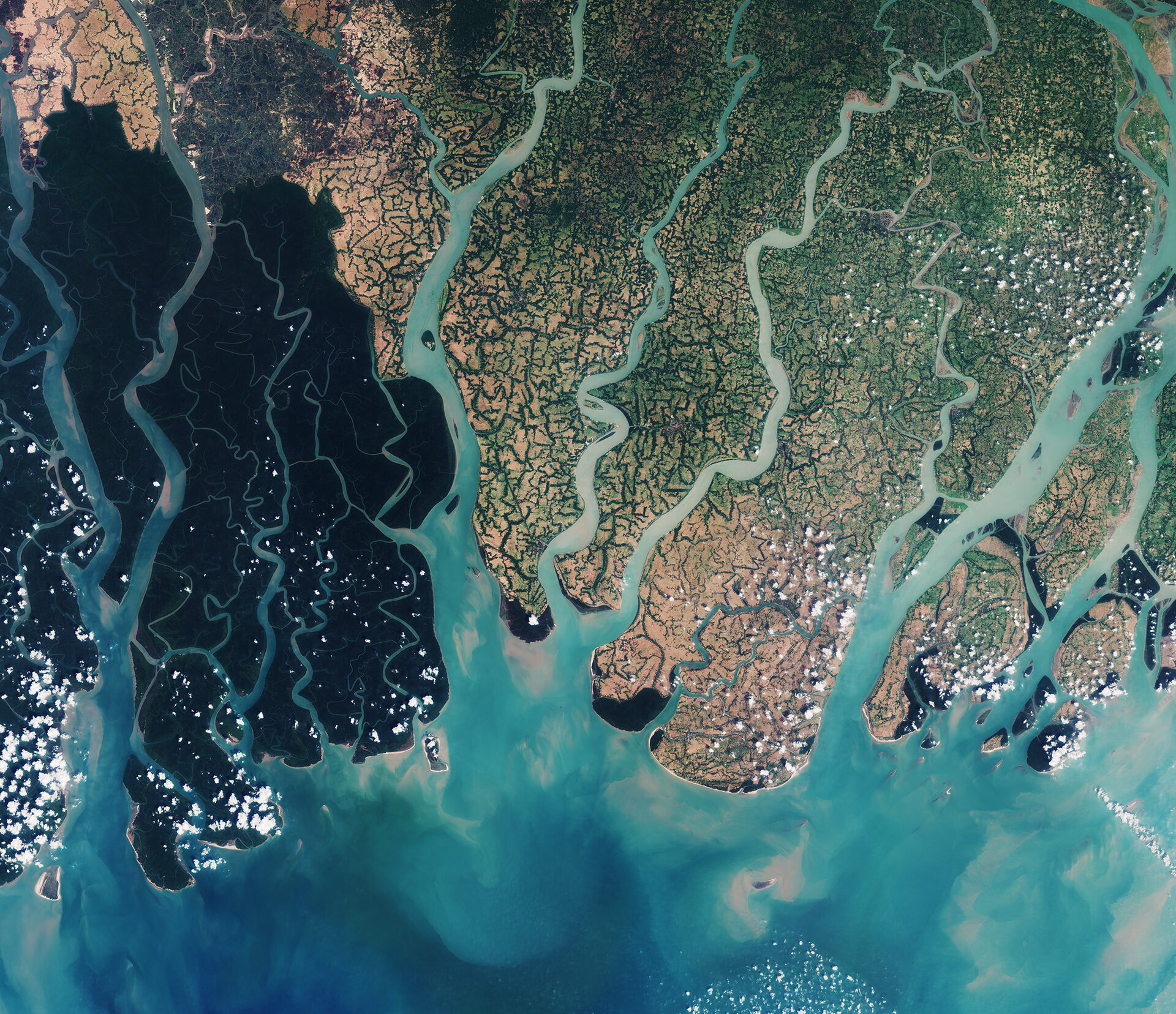 The Sentinel-2A satellite takes us over the very eastern part of the Sundarbans in Bangladesh, in this natural-colour image.

A region comprising southern Bangladesh and a small part of the Indian state of west Bengal, the whole area of the Sundarbans incorporates some 10 000 sq km, consisting of mangrove and swamp forests.

The region of the Sundarbans appears in dark shades of green in this image, while the adjacent areas in brighter colours are densely populated and dominated by agriculture.

Sundarbans is the world’s largest single chunk of tidal halophytic mangrove forest. Generally, fresh water is required for plants, but these mangrove forests can also thrive in saline water.

This area lies on the Bay of Bengal, the world’s largest bay. A number of large rivers – including the Ganges, its tributaries and various other rivers, all flow into its waters, forming the Ganges–Brahmaputra Delta.

The erosional forces of the sea and wind along the coast continuously mould the landscape, together with the huge amounts of silt and other sediments, deposited in the countless estuaries, visible in the water. Distinct throughout the image, the network of these estuaries, tidal rivers and creeks, criss-crossed by numerous channels, enclose flat, densely forested, marshy islands and agricultural plots.

Most of the delta is composed of alluvial soils made up of fine sediment that settles to the bottom as river currents slow in the estuary. The soil has large amounts of minerals and nutrients, ideal for agriculture.

These fertile floodplains host jute, tea and rice – the major crops grown in the Ganges Delta, visible as brighter patches on the land areas in the right part of the image. Fishing is also an important activity, and a major source of food for many of the inhabitants of the various towns, which we can see along the brighter areas.

The Sundarbans National Park, established in 1984 and a designated UNESCO World Heritage Site, is a core region within the Bengal Tiger Reserve. The almost extinct Bengal tiger is the national animal of Bangladesh and is considered the second largest tiger in the world.

This image – also featured on the Earth from Space video programme – was captured by Sentinel-2A on 18 March 2016.