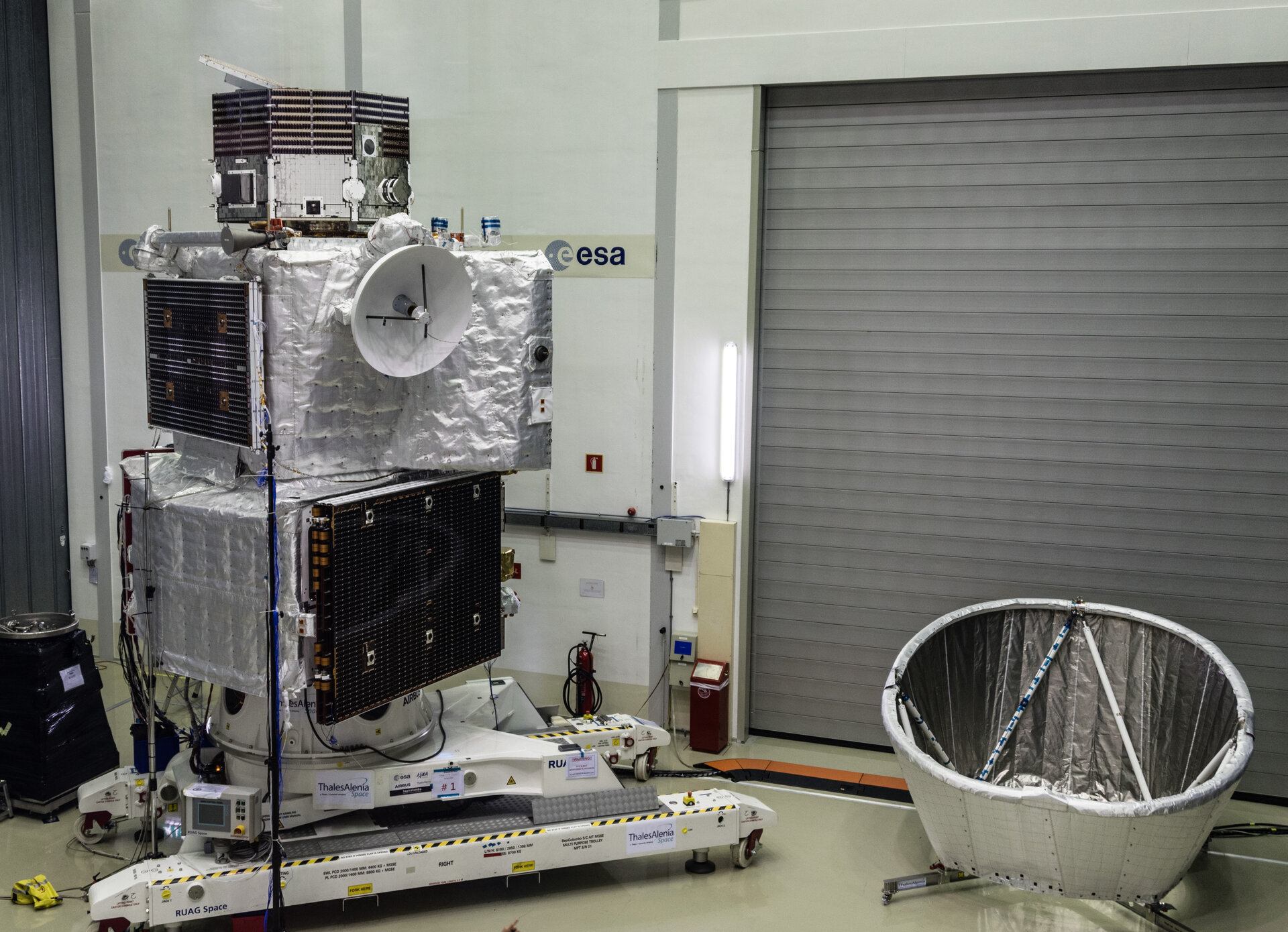 BepiColombo, a joint ESA and JAXA mission to Mercury, has completed its final tests in launch configuration, the last time it will be stacked like this before being reassembled at the launch site next year.

The image was taken on 6 July, during a dedicated press event where media were invited to see BepiColombo in ESA’s test centre. In the coming weeks, the three spacecraft elements will be separated for a final set of tests.

The Mercury Transfer Module is seen at the bottom of the stack, with one folded solar array visible to the right. When both solar arrays are deployed they span about 30 m. The module will use solar-electric propulsion as well as gravity assists at Earth, Venus and Mercury to carry two science orbiters to Mercury orbit.

ESA’s Mercury Planetary Orbiter is seen in the middle of the stack (with the folded solar array towards the left and antenna to the right). JAXA’s Mercury Magnetospheric Orbiter sits at the top of the 6 m-high stack. During the cruise to Mercury it will be protected by the Magnetospheric Orbiter Sunshield and Interface Structure (MOSIF), which in this image is sitting on the floor to the right.

After arriving at Mercury, the modules will separate, and from their respective orbits the science orbiters will make complementary measurements of Mercury’s interior, surface, exosphere and magnetosphere, following up on many of the open questions raised by NASA’s Messenger mission.

The final tests completed with BepiColombo in the launch configuration – also with the MOSIF in place – were vibration tests to simulate the shaking conditions at launch. In the coming weeks the assembly will be dismantled and the individual modules will undergo final checks following the vibration test, including solar array deployment tests. In addition, the transfer module will undergo a thermal vacuum test to simulate the extreme environmental conditions expected during the cruise.

The spacecraft is scheduled to leave Europe in March, with a launch from Kourou, French Guiana, anticipated in October 2018, and arrival at Mercury at the end of 2025.

See here for the latest status update, and our video gallery for examples of some of the recent tests.