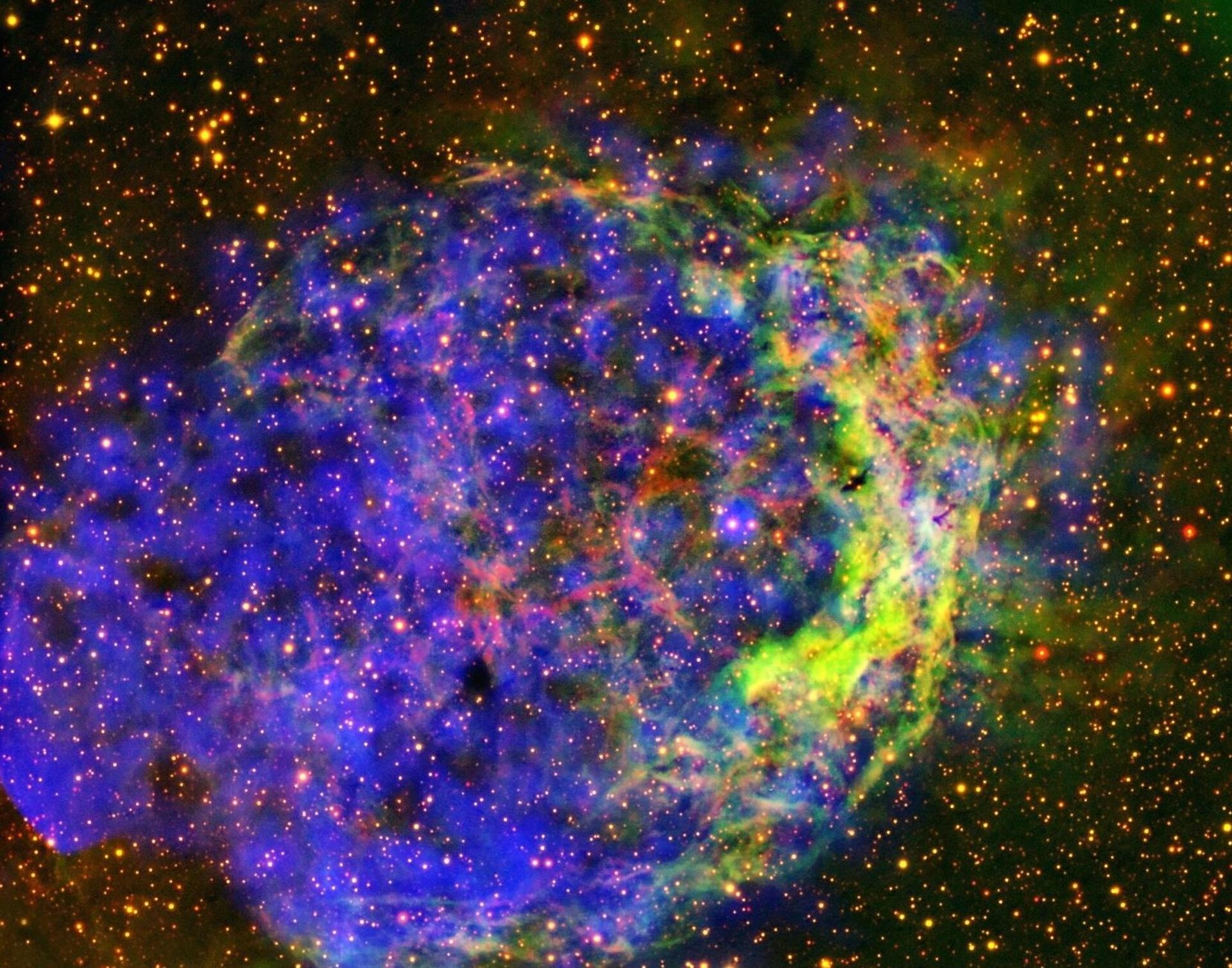 This turbulent celestial palette of purple and yellow shows a bubble of gas named NGC 3199, blown by a star known as WR18 (Wolf-Rayet 18).

Wolf-Rayet stars are massive, powerful, and energetic stars that are just about reaching the end of their lives. They flood their surroundings with thick, intense, fast-moving winds that push and sweep at the material found there, carving out weird and wonderful shapes as they do so. These winds can create strong shockwaves when they collide with the comparatively cool interstellar medium, causing them to heat up anything in their vicinity. This process can heat material to such high temperatures that it is capable of emitting X-rays, a type of radiation emitted only by highly energetic phenomena in the Universe.

This is what has happened in the case of NGC 3199. Although this kind of scenario has been seen before, it is still relatively rare; only three other Wolf-Rayet bubbles have been seen to emit X-rays (NGC 2359, NGC 6888, and S308). WR18 is thought to be a star with especially powerful winds; once it has run out of material to fuel these substantial winds it will explode violently as a supernova, creating a final breath-taking blast as it ends its stellar life.

This image was taken by the European Photon Imaging Camera (EPIC) on ESA’s XMM-Newton X-ray space observatory, and marks different patches of gas in different colours. The incredibly hot, diffuse, X-ray-emitting gas within the Wolf-Rayet bubble is shown in blue, while a bright arc that is visible in the optical part of the spectrum is traced out in shades of yellow-green (oxygen emission) and red (sulphur emission).

This blue and yellow-green component forms an optical nebula – a glowing cloud of dust and ionised gases – that stretches out towards the western end of the X-ray bubble (in this image, North is to the upper left). This lopsided arc caused astronomers to previously identify WR18 as a so-called runaway star moving far faster than expected in relation to its surroundings, but more recent studies have shown that the observed X-ray emission does not support this idea. Instead, the shape of NGC 3199 is thought to be due to variations in the chemistry of the bubble’s surroundings, and the initial configuration of the interstellar medium around WR18.

Explore this object in ESASky.