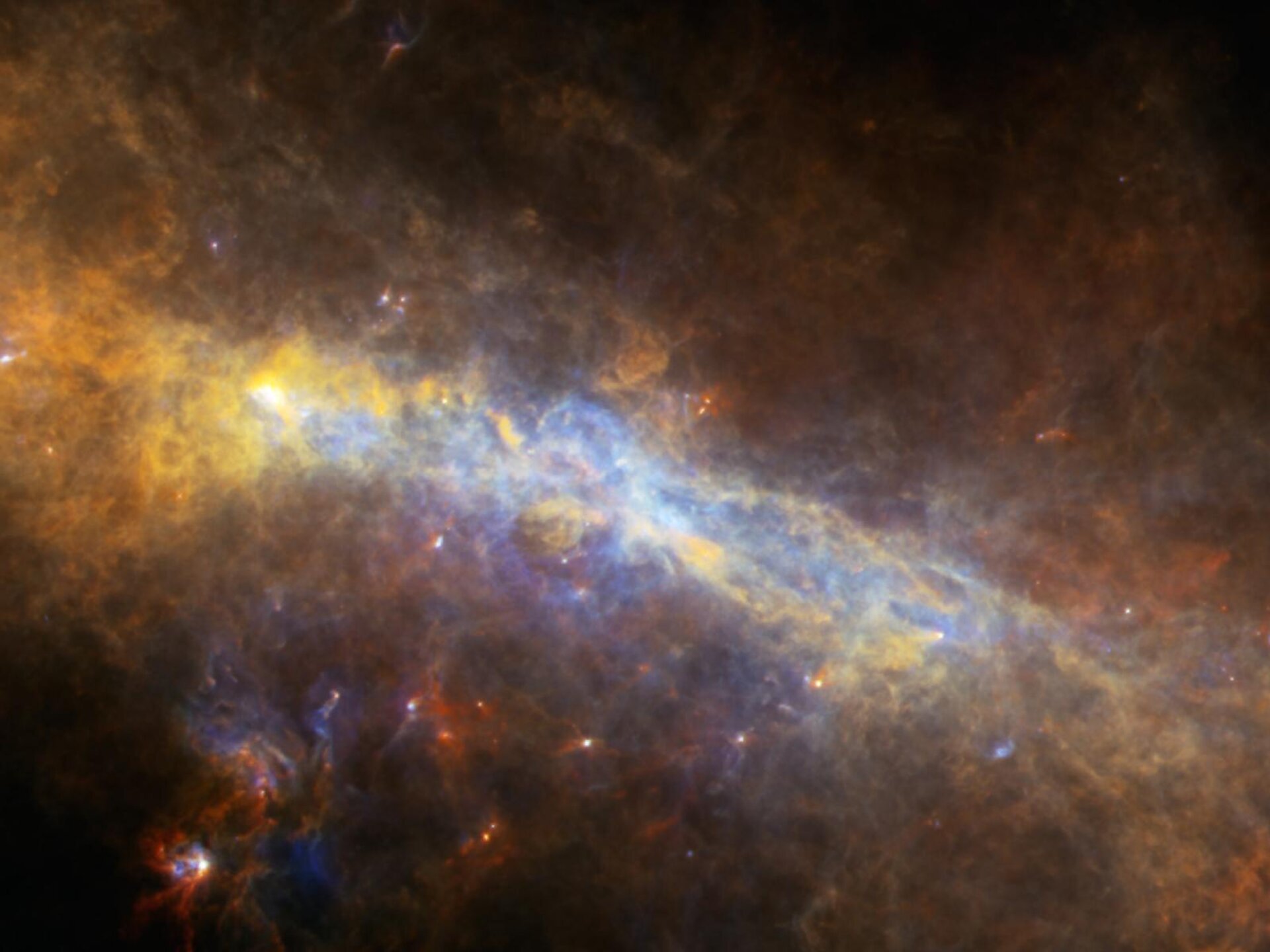 Herschel’s view of the Galactic Centre

An odd-shaped formation of gas and dust at the centre of the Milky Way, captured by the far-infrared cameras on board ESA’s Herschel space observatory. The nearly continuous strip of dense and cold clumps of material forms an infinity symbol, or sideways 8, that is a few hundred light years across. In this image, the strip twists around an invisible axis running roughly from the top left to the bottom right.

The infinity-shaped loop, estimated to have a whopping 30 million solar masses, is made up of dense gas and dust at a temperature of just 15 degrees above absolute zero. Displayed in yellow in the image, it contrasts with warmer, less dense gas and dust from the centre of the Galaxy that appears inside the strip and is coloured in blue. Surrounding the loop is cool gas, painted in red-brownish tones.

The ring and its surroundings harbour a number of star-forming regions and young stars, which stand out in bright-blue colour in the image. The area is part of the Central Molecular Zone, a region at the centre of the Milky Way permeated with molecular clouds, which are ideal sites for star formation.

The Galactic Centre is located almost 30,000 light years away from the Sun, in the direction of the Sagittarius constellation. It is a complex and dynamic place, with emission nebulae and supernova remnants – in addition to star-forming molecular clouds – surrounding the supermassive black hole that sits at our Galaxy’s core. The gas and dust in this region appears mostly dark when viewed through an optical telescope, but it can be seen clearly with Herschel’s instruments.

This image was captured by the Herschel’s PACS (Photodetector Array Camera and Spectrometer) and SPIRE (Spectral and Photometric Imaging REceiver) far-infrared cameras, and it was first published in 2011. Obtained as part of Hi-GAL, the Herschel infrared Galactic Plane Survey, it combines observations at three different wavelengths: 70 microns (blue), 160 microns (green) and 250 microns (red).

Herschel was an ESA space observatory active from 2009 to 2013. At the time of its launch, it had the largest telescope ever sent into space.