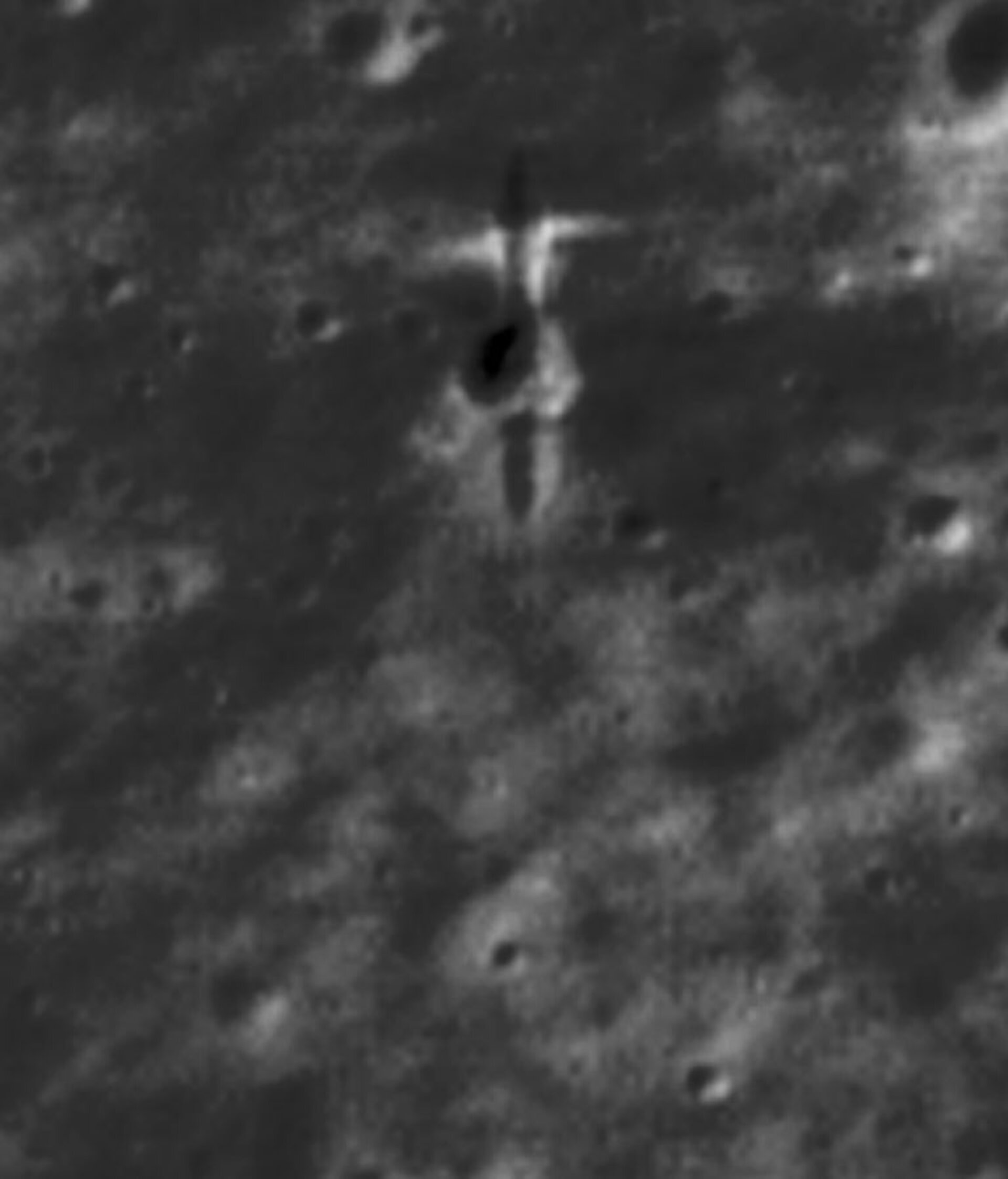 This greyscale, mottled image shows a patch of the Moon’s surface, and features an intriguing shape towards the top of the frame. This was actually made by a spacecraft – it marks the final resting place of ESA’s SMART-1 (Small Missions for Advanced Research in Technology-1).

Launched in 2003, SMART-1 was a Moon-orbiting probe that observed our cosmic companion for roughly three years. On 3 September 2006 the mission’s operations came to an end and the spacecraft was sent down to deliberately crash into the Moon, bouncing and grazing across the lunar surface at a speed of two kilometres per second and achieving Europe’s first lunar touchdown.

After the impact, a bright flash was seen at the boundary between lunar day and night by the Canada-France-Hawaii Telescope in Hawaii. However, as no other spacecraft were currently in orbit at the time to watch the event unfurl, it was not possible to pinpoint exactly where SMART-1 crashed. Scientists used orbit tracking, Earth-based simulations, and observations of the bright impact flash to estimate the location of the landing site, but the mission’s precise resting place remained unknown for over a decade.

Last year, high-resolution images from NASA’s Lunar Reconnaissance Orbiter (LRO) revealed the whereabouts of SMART-1 – as shown here. The spacecraft carved out a four-metre-wide and 20-metre-long gouge as it it impacted and bounced at 34.262° south, 46.193° west. It cut across a small crater and sent lunar soil flying outwards from its skidding, ricocheting path, creating the brighter patches of material seen either side of the crater, with debris from spacecraft and oblique dust ejecta coming to a halt several to tens of kilometres in the forward stream direction.

Alongside searching for water ice on the Moon and observing and photographing our nearest celestial neighbour, SMART-1 played a key role in testing ion propulsion – an efficient type of propulsion that uses electrical energy to propel a spacecraft through space.

SMART-1 was ESA’s first mission to travel to deep space using this type of propulsion. Ion propulsion will also be used on the joint ESA-JAXA BepiColombo mission when it launches in October of this year towards Mercury.

The field of view in the image is 50 metres wide (north is up), with solar illumination coming from the west. SMART-1 touched down from north to south.