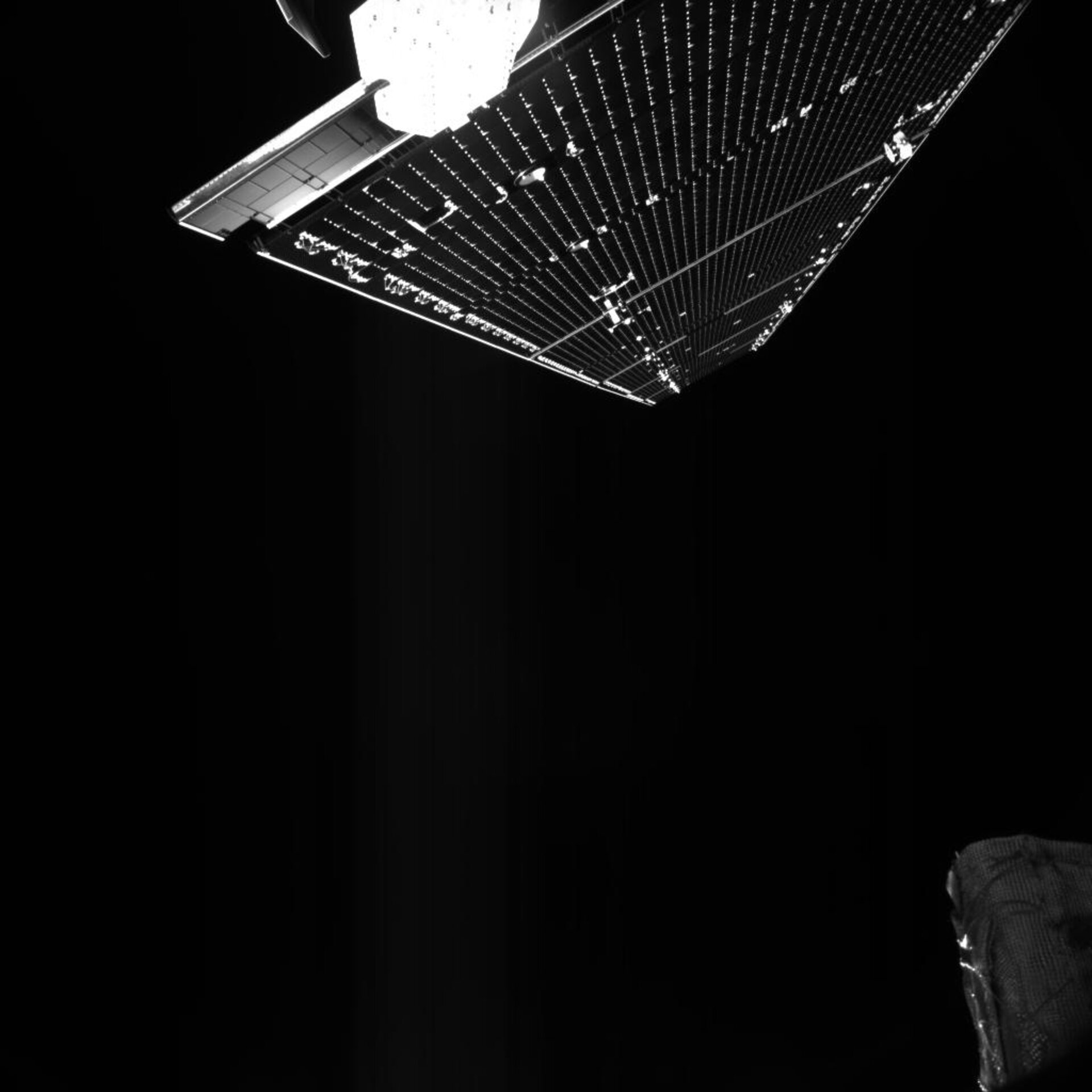 Soon after launch, the two 15 metre-long solar arrays of the BepiColombo Mercury Transfer Module (MTM) were pointed straight at the Sun to maximise the amount of power obtained, as is common practice for spacecraft powered by solar energy. On Saturday 27 October, a week after launch, the solar arrays were rotated to a position off-pointed by 54 degrees with a rotation rate of about 0.5 degrees per second.
One of the MTM’s three monitoring cameras, M-CAM 1, captured a sequence of images during the rotation, which took a bit less than two minutes to complete. With a picture taken every six seconds, the array is seen rotated by a further three degrees in each subsequent image. Each image has an exposure time of 20 milliseconds and a resolution of 1024 x 1024 pixels. The structure seen in the bottom corner is one of the sun sensor units on the MTM, with the multi-layered insulation visible.
While off-pointing the solar arrays reduces the power output, it also helps to slow down the degradation of the solar cells, which naturally occurs over time. As the MTM solar arrays are sized to provide up to 11000 Watts for operating the electric propulsion system – a major power consumer that is currently off – they are capable of providing far more power than is really needed at the moment. It is hence possible to rotate the arrays partially away from the Sun, yet still get plenty of power to supply the spacecraft.
For checking out the electric propulsion system late in November and when starting the first period of continuous electric propulsion operations in mid-December, the arrays will be rotated towards the Sun again. As the spacecraft gets closer to the Sun later in the interplanetary cruise phase, the MTM solar arrays must be off-pointed to avoid overheating, while still ensuring that sufficient power is generated for the electric propulsion system.
Management of power generation and consequently solar array positioning is one of the major challenges of BepiColombo operations, in the interplanetary cruise phase as well as during routine operations in Mercury orbit.
BepiColombo is a joint endeavour between ESA and the Japan Aerospace Exploration Agency, JAXA. The European built MTM is carrying ESA’s Mercury Planetary Orbiter and JAXA’s Mercury Magnetospheric Orbiter on a seven year journey to the smallest and least explored planet in the inner Solar System. It is the first Mercury mission to send two science orbiters to make complementary measurements of the planet and its dynamic environment at the same time.