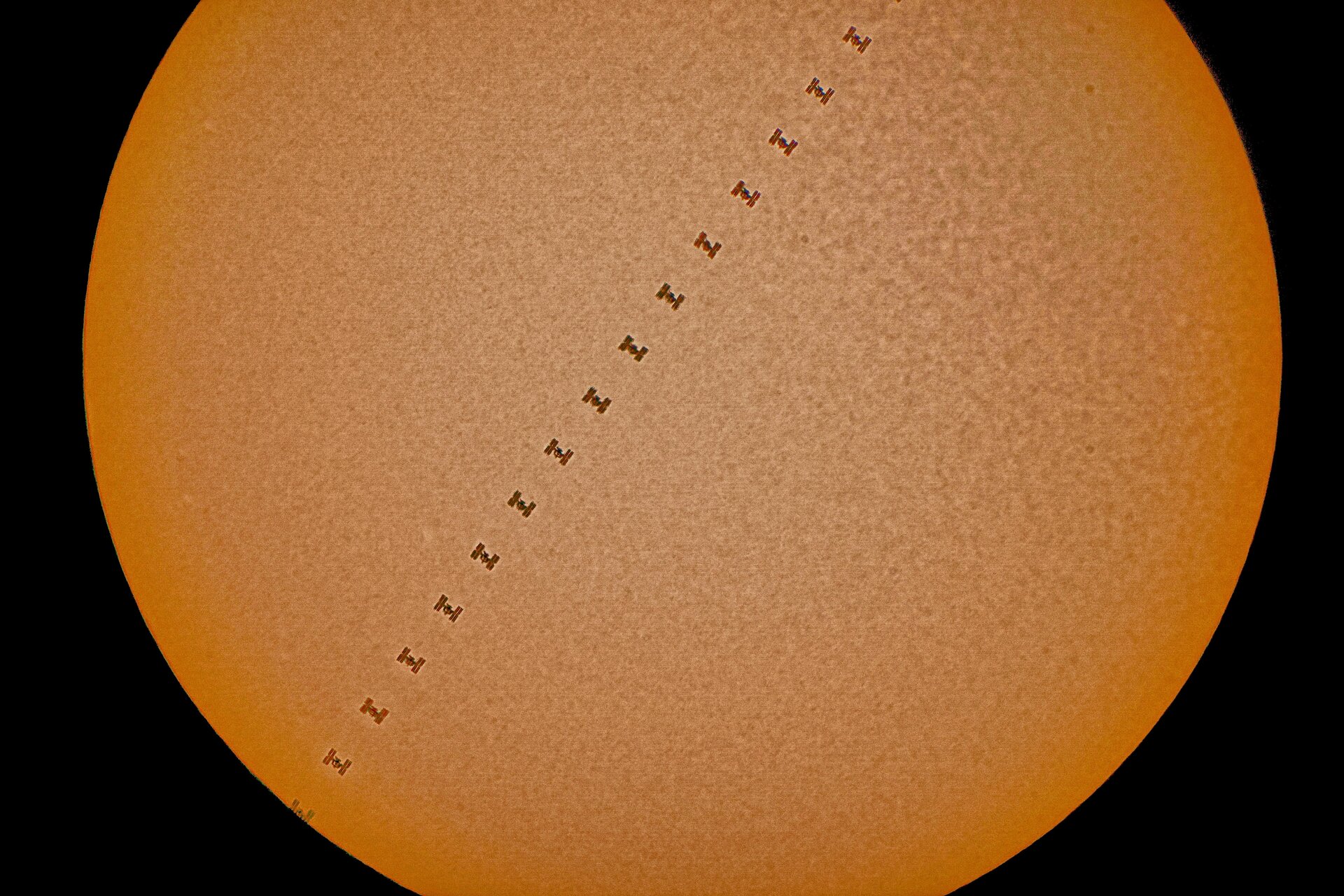 Humankind's most distant outpost was recently captured crossing the face of our enormous and gleaming Sun. The fleeting transit of the International Space Station was over in the blink of an eye, but Ian Griffin, Director at the Otago Museum of New Zealand, made sure he was in the right place to capture it.

“A transit was predicted about 130 km from my home in Dunedin on New Zealand's South Island. So, I packed my telescope into my car and drove for approximately 2 hours”, explains Ian.

“On Thursday 31 January, at 11:07 NZDT, the International Space Station crossed the Sun in less time than a human heart beats once, and I was there to witness it”.

The Space Station, slightly larger in size than a football field, orbits Earth every 92 minutes. It is one of the most remarkable endeavours our species has ever embarked upon, yet it pales in comparison to the size and power of our star.

This remarkable spectacle serves as a much needed reminder that the people and technology we send into space can be affected by solar activity, and the changing environment .

One of the largest geomagnetic storms on record, the Carrington event of 1859, was caused as a fast coronal mass ejection associated with an enormous solar flare struck Earth’s magnetosphere. The impact created auroras as far north as Queensland, Australia, and as far south as the Caribbean.

Telegraph systems across Europe and North America failed, with reports of some operators receiving electric shocks and telegraph pylons sending out sparks.

Today, a storm of this magnitude would create far greater disruption, as we become ever-more dependent on infrastructure in space and on Earth that is vulnerable to the outbursts of the Sun.

As part of ESA’s Space Safety & Security activities, the Space Weather Office is working to minimise the potential damage and disruption these events can cause. The future Lagrange mission will keep a constant eye on the Sun, sending timely warnings via the Space Weather Service Network to operators and controllers of vital infrastructure, giving them time to take protective measures.

This early warning system will also be of great importance to astronauts and future explorers to the Moon and Mars, who, vulnerable to the radiation emitted during these extreme events will need time to get to safety.

From 3-5 March, ESA and the Norwegian Space Agency are coming together for the #AuroraHunters SocialSpace, live from Tromso, Norway. Together with a group of 30 attendees, selected from hundreds of applicants across the globe, we will be highlighting the affects of the Sun on our infrastructure, technologies and skies – in the form of the awesome Aurora. Keep an eye on @esaoperations and follow the hastag #AuroraHunters on twitter to keep up with the event.