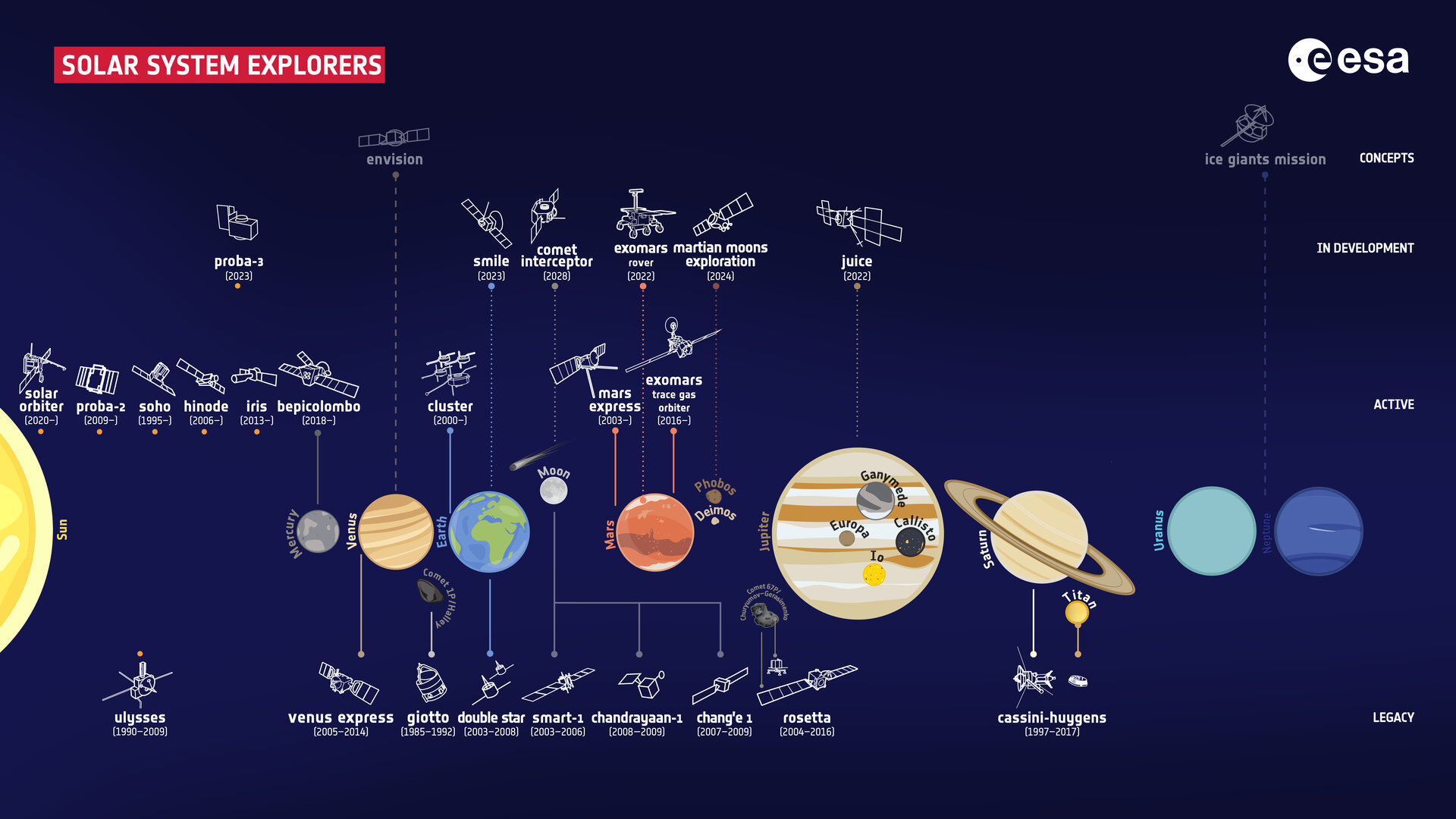 ESA's science missions have been exploring our planetary neighbourhood to tackle the big questions that help to put Earth in context, to understand a planet's interaction with its host star, and to search for habitable worlds. With more and more planets found in solar systems beyond ours, understanding our own cosmic neighbourhood has never been so important.

We have already sent spacecraft to Earth’s nearest planetary neighbours – Mars and Venus – to understand why they evolved so differently, with the upcoming ExoMars rover soon to drill below the Red Planet's surface to see if there is any evidence of past life preserved underground. In the next decade we’ll be unlocking the secrets of the innermost planet, Mercury, and sending a spacecraft to Jupiter and its ocean-bearing moons – both key to understanding Solar System evolution.

The successes of our earlier missions – including landing on Titan and orbiting and landing on a comet – form part of ESA's science and technology legacy, feeding into the next generation of Solar System missions. Even missions that have completed their in-flight operations still yield new scientific discoveries decades after, thanks to their vast data archives available to researchers worldwide.

This graphic showcases the current status of ESA's space science exploration missions in the Solar System, including upcoming collaborative missions with partner agencies (e.g. Smile in collaboration with China) and the so-called 'missions of opportunity' – missions led by other agencies but which ESA and its member states participate (e.g. Martian Moons Exploration, MMX, led by JAXA), future mission concepts (e.g. the candidate mission to Venus, Envision) and a joint study with NASA to send a mission to the ice giants. For a complete breakdown of the various ‘class’ of missions, see our mission navigator.

This portfolio of past, present and future missions shows the importance of long-term planning to realise the missions that investigate fundamental science questions, and to ensure the continued development of innovative technology, inspiring new generations of European scientists and engineers. For example, Rosetta, well-known for its recent series of inspirational successes, was first conceived several decades ago, in the 1980s. Where do we want to be in twenty or thirty years time?

In the graphic, date ranges refer to launch and completion of in-flight operations. For future missions the foreseen launch date is indicated.

ESA also has a fleet of space science missions observing the Universe across the electromagnetic spectrum. Discover them here.