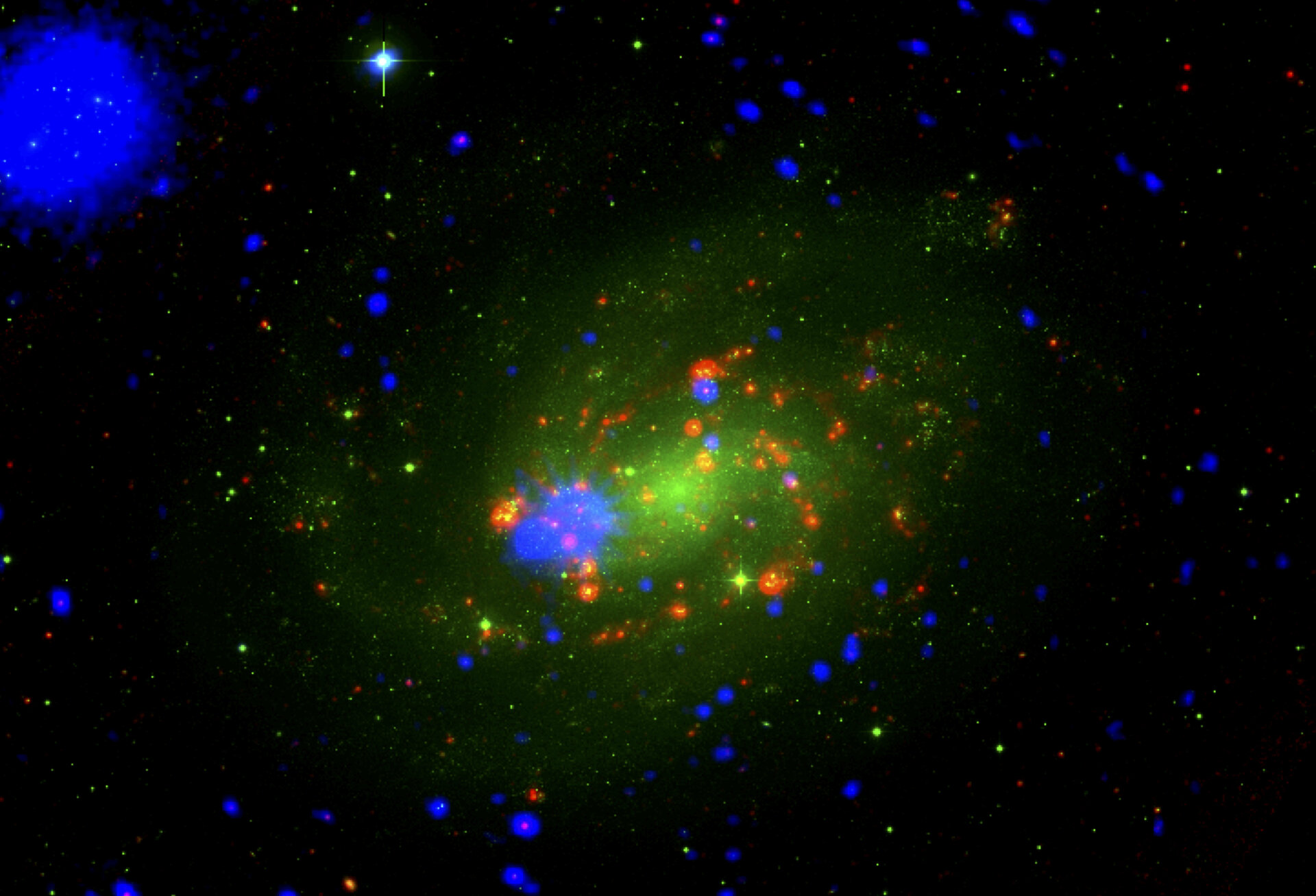 Past and future generations of stars in NGC 300

This swirling palette of colours portrays the life cycle of stars in a spiral galaxy known as NGC 300.

Located some six million light-years away, NGC 300 is relatively nearby. It is one of the closest galaxies beyond the Local Group – the hub of galaxies to which our own Milky Way galaxy belongs. Due to its proximity, it is a favourite target for astronomers to study stellar processes in spiral galaxies.

The population of stars in their prime is shown in this image in green hues, based on optical observations performed with the Wide Field Imager (WFI) on the MPG/ESO 2.2-metre telescope at La Silla, Chile. Red colours indicate the glow of cosmic dust in the interstellar medium that pervades the galaxy: this information derives from infrared observations made with NASA’s Spitzer space telescope, and can be used to trace stellar nurseries and future stellar generations across NGC 300.

A complementary perspective on this galaxy’s composition comes from data collected in X-rays by ESA’s XMM-Newton space observatory, shown in blue. These represent the end points of the stellar life cycle, including massive stars on the verge of blasting out as supernovas, remnants of supernova explosions, neutron stars, and black holes. Many of these X-ray sources are located in NGC 300, while others – especially towards the edges of the image – are foreground objects in our own Galaxy, or background galaxies even farther away.

The sizeable blue blob immediately to the left of the galaxy’s centre is especially interesting, featuring two intriguing sources that are part of NGC 300 and shine brightly in X-rays.

One of them, known as NGC 300 X-1, is in fact a binary system, consisting of a Wolf-Rayet star – an ageing hot, massive and luminous type star that drives strong winds into its surroundings – and a black hole, the compact remains of what was once another massive, hot star. As matter from the star flows towards the black hole, it is heated up to temperatures of millions of degrees or more, causing it to shine in X-rays.

The other source, dubbed NGC 300 ULX1, was originally identified as a supernova explosion in 2010. However, later observations prompted astronomers to reconsider this interpretation, indicating that this source also conceals a binary system comprising a very massive star and a compact object – a neutron star or a black hole – feeding on material from its stellar companion.

Data obtained in 2016 with ESA’s XMM-Newton and NASA’s NuSTAR observatories revealed regular variations in the X-ray signal of NGC 300 ULX1, suggesting that the compact object in this binary system is a highly magnetized, rapidly spinning neutron star, or pulsar.

The large blue blob in the upper left corner is a much more distant object: a cluster of galaxies more than one billion light years away, whose X-ray glow is caused by the hot diffuse gas interspersed between the galaxies.