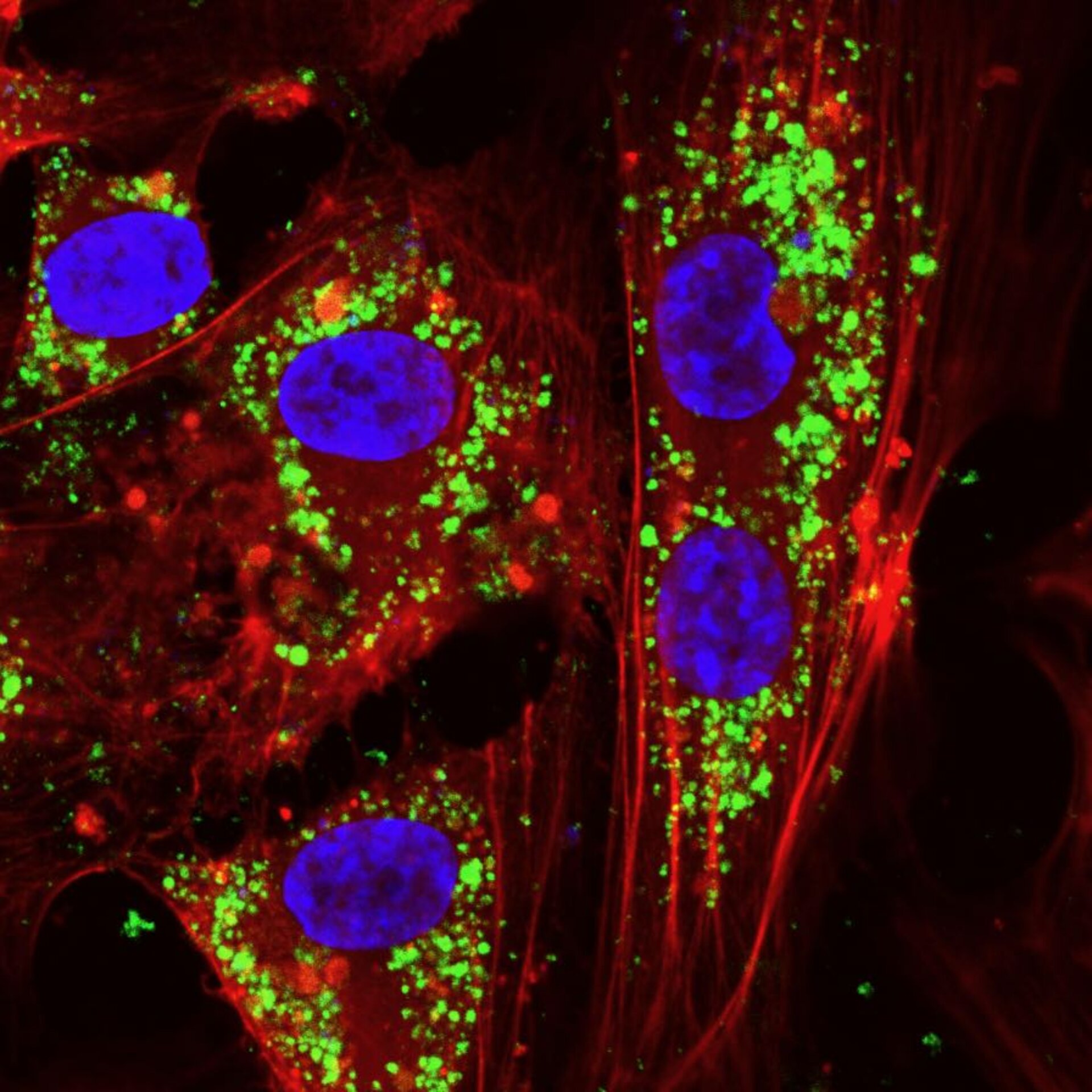 Down to the microscopic level, nanoparticles show promising properties. A team of experts in Italy has spent years tailoring tiny inorganic materials and analysing their behaviour. Some have magnetic properties, others are able to give electrical stimuli. In this picture, a peculiar type of nanoparticle is mimicking the biological activity of enzymes in living organisms.

These ceramic particles, called nanoceria, are chemically designed in a laboratory and can display a powerful antioxidant activity. The nanoparticles are highlighted in fluorescent green, while the nucleus of each cell is shown in blue. The skeleton of the cell, or cytoskeleton, appears in red.

These tiny, smart particles could hold a key to fight chronic disease, as they are able to protect organisms from the damage caused by oxidative stress.

Oxidative stress is an imbalance of free radicals and antioxidants in the body, which can lead to cell damage. Oxidative stress occurs naturally and plays a role in the ageing process, but also in several pathological conditions, such as heart failure, muscle atrophy and Parkinson’s disease.

One way to fight this natural wear is through the intake of antioxidants – cells that can prevent or slow damage to other cells caused by free radicals.

In an experiment flown to the Space Station in 2017 the nanoceria particles remained stable and provided protection to the muscle cells. Nanoceria could act as an antioxidant agent with effects lasting longer than any supplement from the pharmacy – up to several weeks.

Now the Nano Antioxidants project is ready to be launched on the SpaceX’s Dragon supply spacecraft this week from Cape Canaveral, in the United States, towards the International Space Station. Since long-term exposure to microgravity and radiation increases the damage to muscle cells, the Space Station is a perfect scenario in which to study how the cells deteriorate and how to fight this.

Nanotechnology has been largely explored in medicine on Earth, and is now on its way to space to find more answers. This innovative solution will support deep space exploration and could result in novel therapeutic approaches to a number of diseases affecting people on Earth.