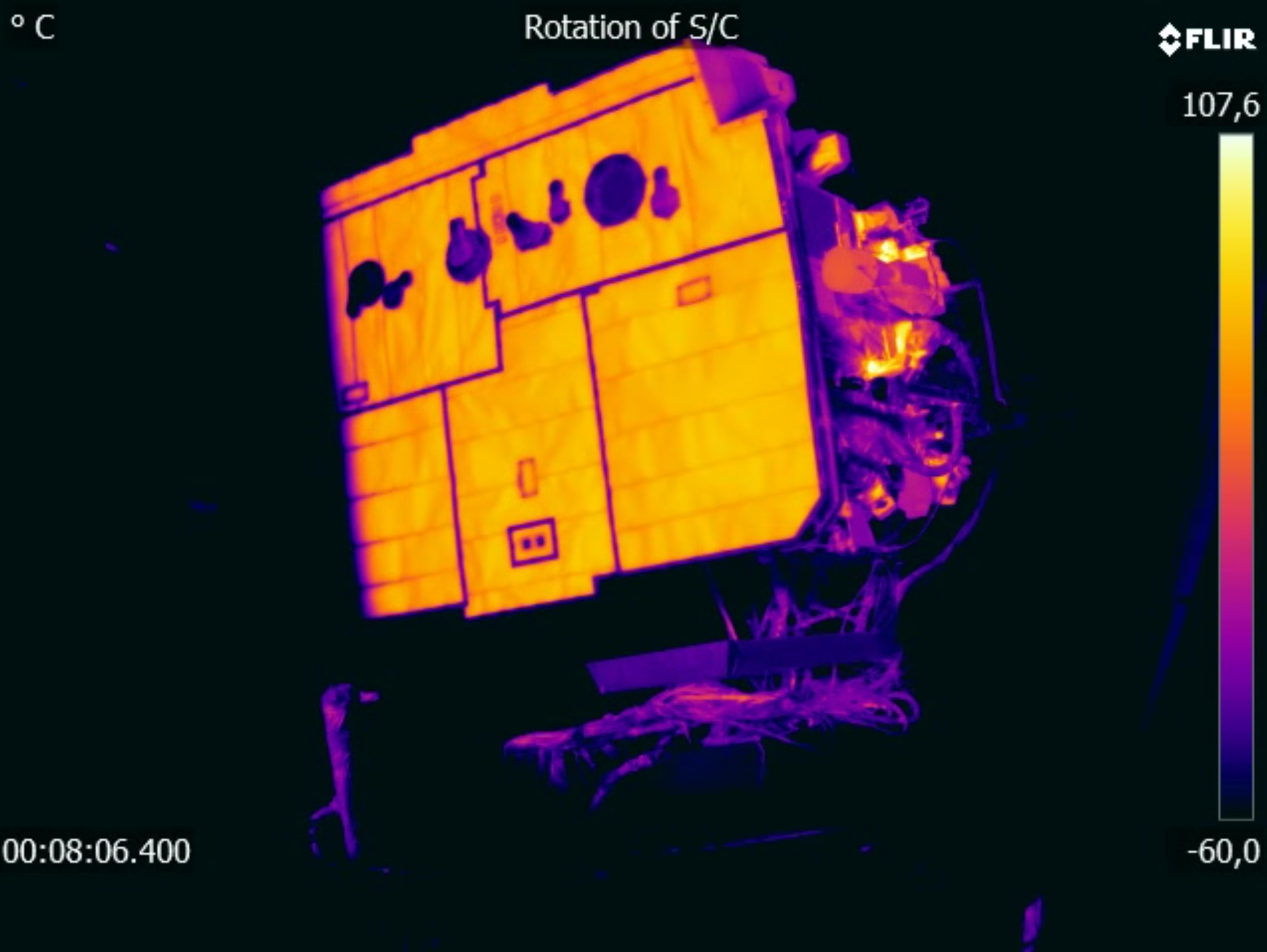 An infrared view of our Solar Orbiter spacecraft, which is currently undergoing a series of tests at the IABG facility in Ottobrunn, Germany, ahead of its launch, scheduled for February 2020.

Selected in 2011 as the first medium-class mission in ESA's Cosmic Vision programme, Solar Orbiter was designed to perform unprecedented close-up observations of the Sun. The spacecraft carries a suite of 10 state-of-the-art instruments to observe the turbulent, sometimes violent, surface of the Sun and study the changes that take place in the solar wind that flows outward at high speed from our nearest star.

Solar Orbiter’s unique orbit will allow scientists to study our parent star and its corona in much more detail than previously possible, and to observe specific features for longer periods than can ever be reached by any spacecraft circling the Earth. In addition, it will measure the solar wind close to the Sun, in an almost pristine state, and provide high-resolution images of the uncharted polar regions of the Sun.

After the preliminary definition and design phase, the mission started its integration and qualification in 2016, including environmental testing of the spacecraft as well as validation of all mission systems and sub-systems.

The first phase of Solar Orbiter’s environmental testing campaign was conducted in IABG’s special thermal-vacuum chamber in December 2018. Inside the chamber, powerful lamps are used to produce a ‘solar beam’ that simulates the Sun's radiation to demonstrate that the spacecraft can sustain the extreme temperatures it will encounter in the Sun's vicinity.

This picture was taken with an infrared camera, and the colouring indicates the temperatures of the spacecraft surface, corresponding to the range indicated in the colour bar on the right-hand side. During this thermal-vacuum test on the spacecraft, the solar beam was used at its maximum flux of about 1800 W/m2, reaching temperatures up to 107,6ºC. An additional thermal-vacuum test was conducted on the heat shield that protects the entire platform from direct solar radiation: during this test, which used infrared plates to simulate the Sun’s heat, the heat shield reached higher temperatures, up to 520ºC, similar to what it will experience during operations.

In this view, the spacecraft panel that will face the Sun is visible on the left, covered with the heat shield. The dark elements visible in the upper part of the panel are sliding doors that will open the path for sunlight to reach the remote-sensing instruments during science operations. Some of the thrusters that will be used to control the spacecraft orbit and to perform manoeuvres are hosted on the panel that is visible on the right in this view.

A video showing the spacecraft rotating as part of a simulated orbit-control-manoeuvre is available here.

After completing the thermal-vacuum tests, Solar Orbiter also successfully concluded the mechanical testing phase, including intense vibration tests, shaking the spacecraft to ensure that it will survive the stress of launch.

Solar Orbiter is an ESA-led mission with strong NASA participation. It will be launched from Cape Canaveral aboard a NASA-supplied Atlas V launch vehicle.

How we make a space mission
ESA is the space agency for Europe, enabling its 22 Member States to achieve results that no individual nation can match. ESA combines space mission development with supporting labs, test and operational facilities plus in-house experts covering every aspect of space, supported through the Agency’s Basic Activities.