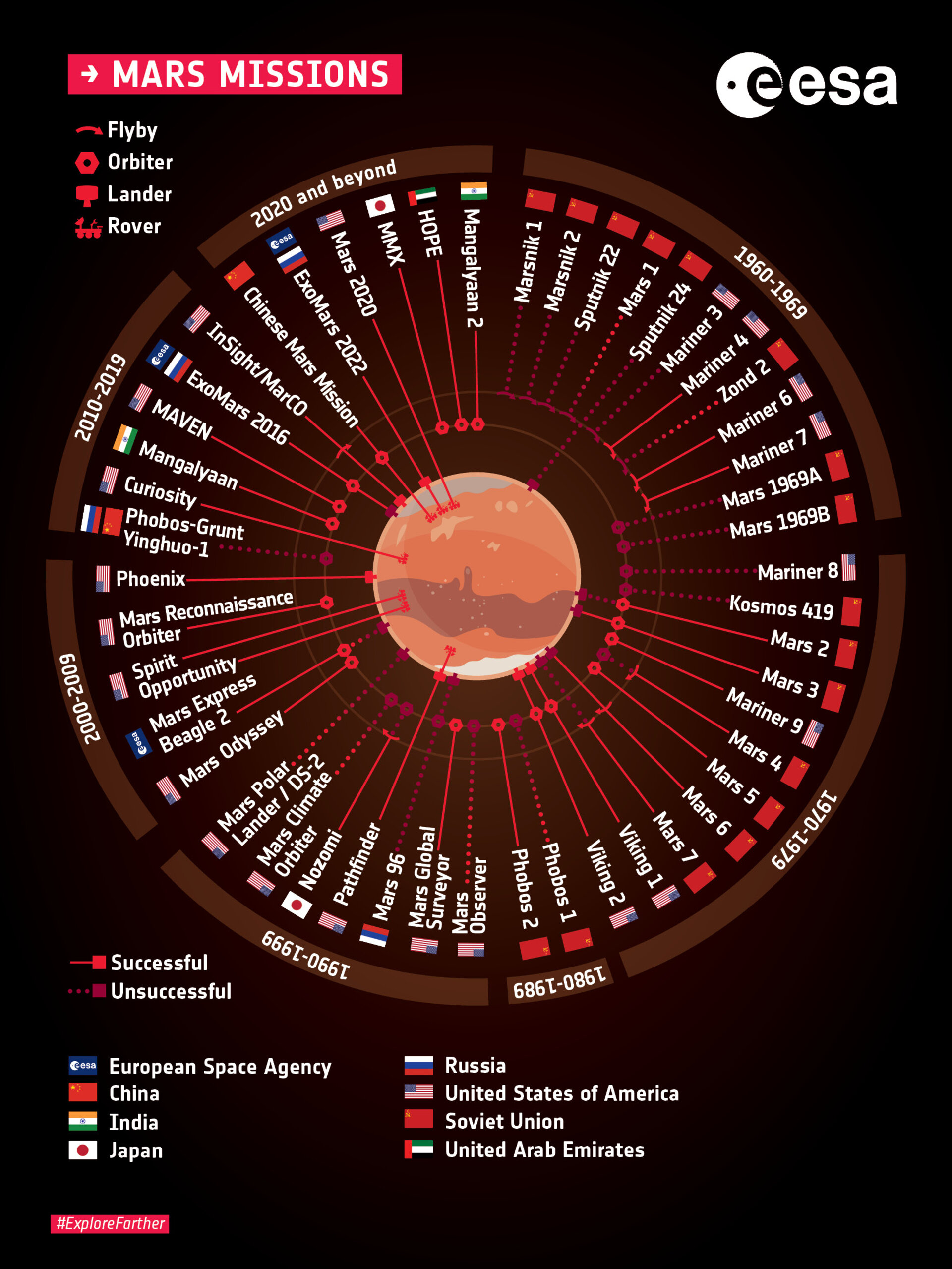 Mars exploration began in the 1960s and more than 40 missions have attempted to reach the Red Planet since – with varying degrees of success. Some early attempts failed at the launch pad, while others reached Mars but were not able to enter orbit around it. Landing on Mars remains challenging even today.

This graphic summaries the history of Mars exploration, categorising the missions into flybys, orbiters, landers and rovers, indicated on the graphic from the outermost circle around Mars, to the surface of the planet as well as by the symbols indicated in the key. Missions to Mars moons are also included but only the mission elements pertaining to Mars itself are shown. A bold red line indicates the mission elements that were successful; the dotted fainter line indicates a (partial) failure, or an uncompleted mission.

Over time, missions have evolved from early flyby attempts, to orbiters, landers and rovers. Mars continues to be an attractive destination for exploration, with missions largely focusing on the search for evidence of life on the Red Planet, and a better understanding of how Earth and Mars evolved so differently. While early Mars exploration efforts were dominated by the Soviet Union and the USA, in recent years and even more so in the next decade will see new Mars missions from a broad range of nations.

Europe has been participating in Mars missions since the 1970s through scientific collaboration and contribution of instruments to US- and Soviet-led missions; more recently European instruments have flown on NASA orbiters, landers and rovers. ESA-led missions began with Mars Express, which is still operational today. ESA is preparing for the launch of the ExoMars rover and surface science platform in 2022 in collaboration with Roscosmos; the rover will be the first to drill down to 2 m to search for life below ground. The ExoMars Trace Gas Orbiter, while already in orbit conducting its own science mission, will provide data relay services for the next mission.

ESA is also looking ahead to the next logical step in Mars exploration – returning a sample from the surface of Mars. NASA’s Mars 2020 mission is the first step of this international endeavour, and two further missions are under study to collect and return the samples (not shown on this graphic). ESA is also participating in JAXA’s Mars Moons Exploration (MMX) mission, which will aim to return a sample from one of the moons (it is indicated as an orbiter on this graphic as it will first enter orbit around Mars, before transferring to the moons).