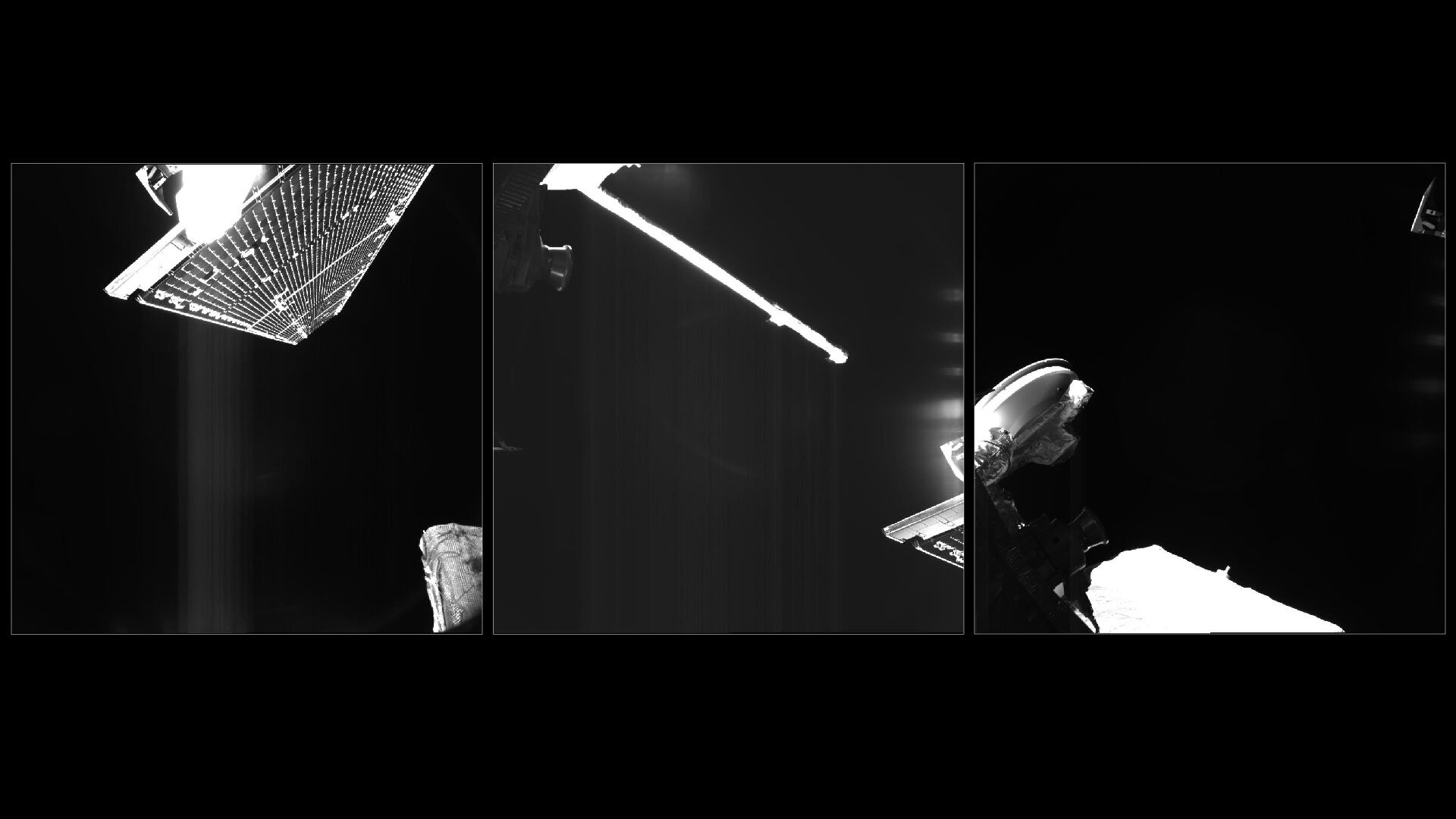 How many times have you taken a selfie and posted it instantly to your favourite social media channel? The Mercury Transfer Module of the BepiColombo spacecraft, currently en route to Mercury, is equipped with three ‘selfie-cams’ and this morning captured a series of snapshots and subsequently posted them to its Twitter account.

The monitoring cameras take black-and-white images in 1024 x 1024 pixel resolution. The cameras point in three different directions, capturing one of the transfer module’s 15 m-long solar arrays (left), and the medium (middle) and high-gain (right) antennas attached to the Mercury Planetary Orbiter. The third spacecraft module, the Mercury Magnetospheric Orbiter, cannot be seen in these views.

After launch last October the monitoring cameras were used to view the deployed structural elements, and since then are used to visually record changes – for example if commands are sent to rotate the solar arrays or to change the pointing of the high-gain antenna, which is oriented towards Earth.

MCAM-3 is used most frequently, to monitor the rotation of the high-gain antenna. In December, MCAM-1 was used to capture a rotation sequence of the MTM’s solar arrays. Given MCAM-1 and -2 had not been used for several months, the images presented here were taken as a simple checkout of the cameras and made quickly available to share on ESA’s channels.

While the Mercury Planetary Orbiter is equipped with a high-resolution scientific camera, this can only be operated after separating from the Mercury Transfer Module upon arrival at Mercury in late 2025 because, like several of the 11 instrument suites, it is located on the side of the spacecraft fixed to the transfer module during cruise.

Check out this 3D tool to view the attitude of the spacecraft, including simulated views from each of the monitoring cameras.

BepiColombo launched from Europe’s Spaceport in Kourou on an Ariane 5 on 19 October 2018 (20 October European time). It is a joint endeavour between ESA and the Japan Aerospace Exploration Agency, JAXA. It is the first European mission to Mercury, the smallest and least explored planet in the inner Solar System, and the first to send two spacecraft – ESA’s Mercury Planetary Orbiter and JAXA’s Mercury Magnetospheric Orbiter – to make complementary measurements of the planet and its dynamic environment at the same time.