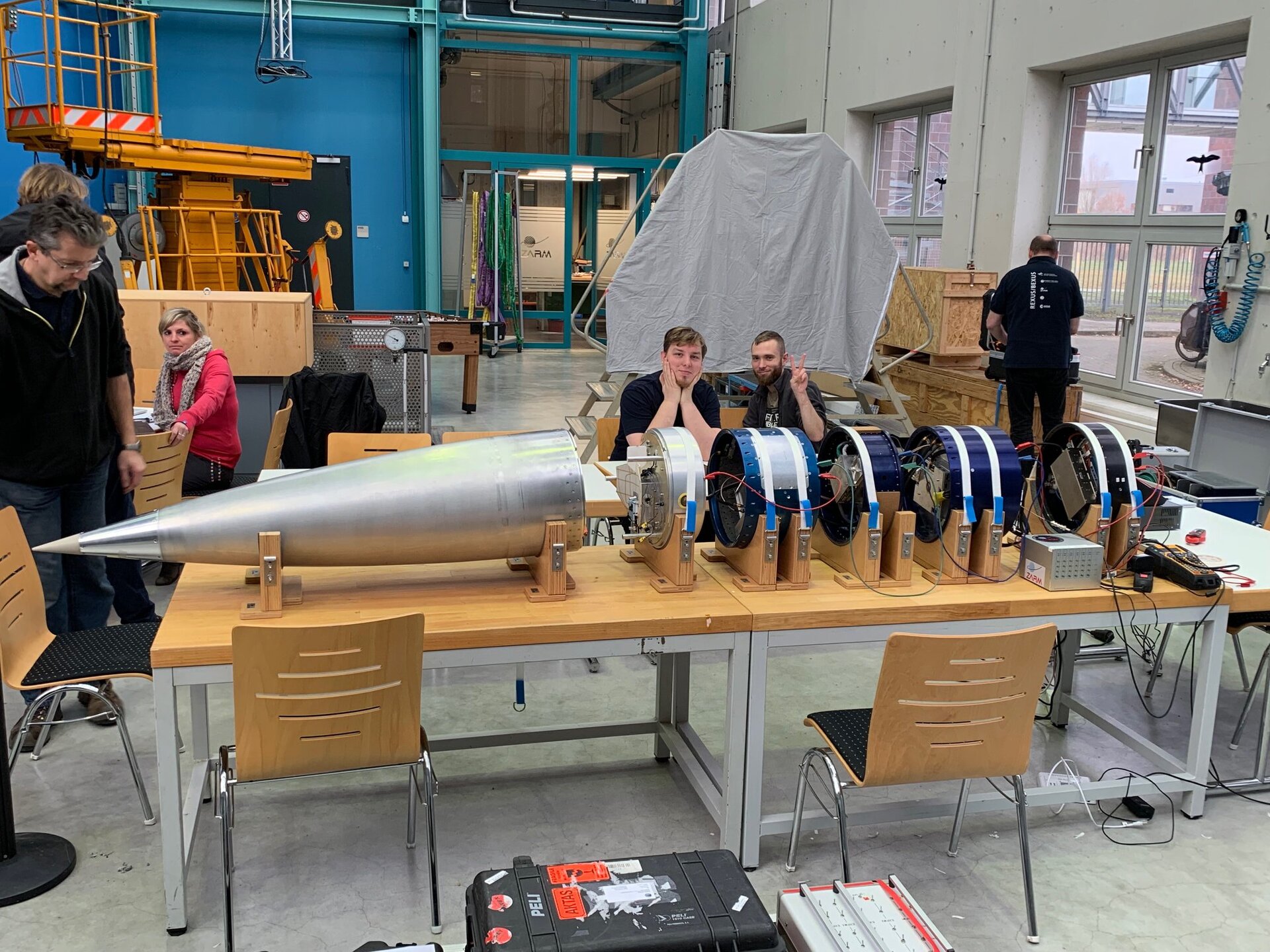 Why rockets are so captivating is not exactly rocket science. Watching a chunk of metal defy the forces of gravity satisfies many a human’s wish to soar through the air and into space.

Today there are countless rockets to satisfy the itch, and they are not all big launchers delivering heavy satellites into space, like Europe’s Ariane 5 and the upcoming Ariane 6.

Sounding rockets, like this Rexus (Rocket Experiments for University Students) being assembled at the ZARM facilities in Bremen, Germany, are launched regularly in the name of science from the Esrange Space Center in northern Sweden.

Rexus rockets carry approximately 100 kg of experiments to the edge of space before falling back to Earth, providing up to three minutes of microgravity along the way.

The sounding rocket pictured was launched in March 2019 on Rexus 25 and included an experiment by students from Gdańsk University of Technology, Poland. Several modular experiments are held in the circular containers imaged here.

Called Hedgehog, the experiment tested patented instruments for measuring acceleration, vibration and heat flow during launch. The team hopes to refine the tools for use on ground-based qualification tests that all payloads must pass before launch.

At launch, Rexus produces a peak vertical acceleration of around 17 times the force of gravity. Once the rocket motors shut off, the experiments enter freefall. On the downward arc parachutes deploy, lowering the experiments to the ground for transport back to the launch site by helicopter as quickly as possible.

A service module sends data and receives commands from the ground to keep everything on course while sending videos and data to ground stations.

ESA has used sounding rockets for over 30 years to investigate phenomena under microgravity from the state-of-the-art facilities are available at Esrange. The laboratories include microscopes, centrifuges and incubators so investigators can prepare and analyse their experiments around flight.

The Rexus/Bexus programme is realised under a bilateral agreement between the German Aerospace Center (DLR) and the Swedish National Space Agency. The Swedish share of the payload is made available to students from European countries through a collaboration with ESA. EuroLaunch, a cooperation between Swedish Space Corporation and DLR’s Mobile Rocket Base (abbreviated as MORABA) is responsible for campaign management and launch vehicle operations. Experts from DLR, SSC, Bremen University’s Center of Applied Space Technology and Microgravity (ZARM) and ESA provide technical support to the student teams throughout the project. Rexus and Bexus are launched from SSC’s Esrange Space Center in northern Sweden.

The Rexus/Bexus programme launches two sounding rockets a year and provides an experimental near-space platform for students who can work on different research areas from atmospheric research and fluid physics, to materials science, radiation physics and technology demonstrators.

Another platform for microgravity experimentation is the Space Rider laboratory. To be launched on a Vega-C rocket, the high-tech space lab can fit up to 800 kg of payloads inside the environmentally controlled cargo bay that will run in low-Earth orbit for a minimum of two months before returning its payloads to Earth.

Like sounding rockets, Space Rider will enable a range of experiments in microgravity and open opportunities for educational missions, starting in 2022.