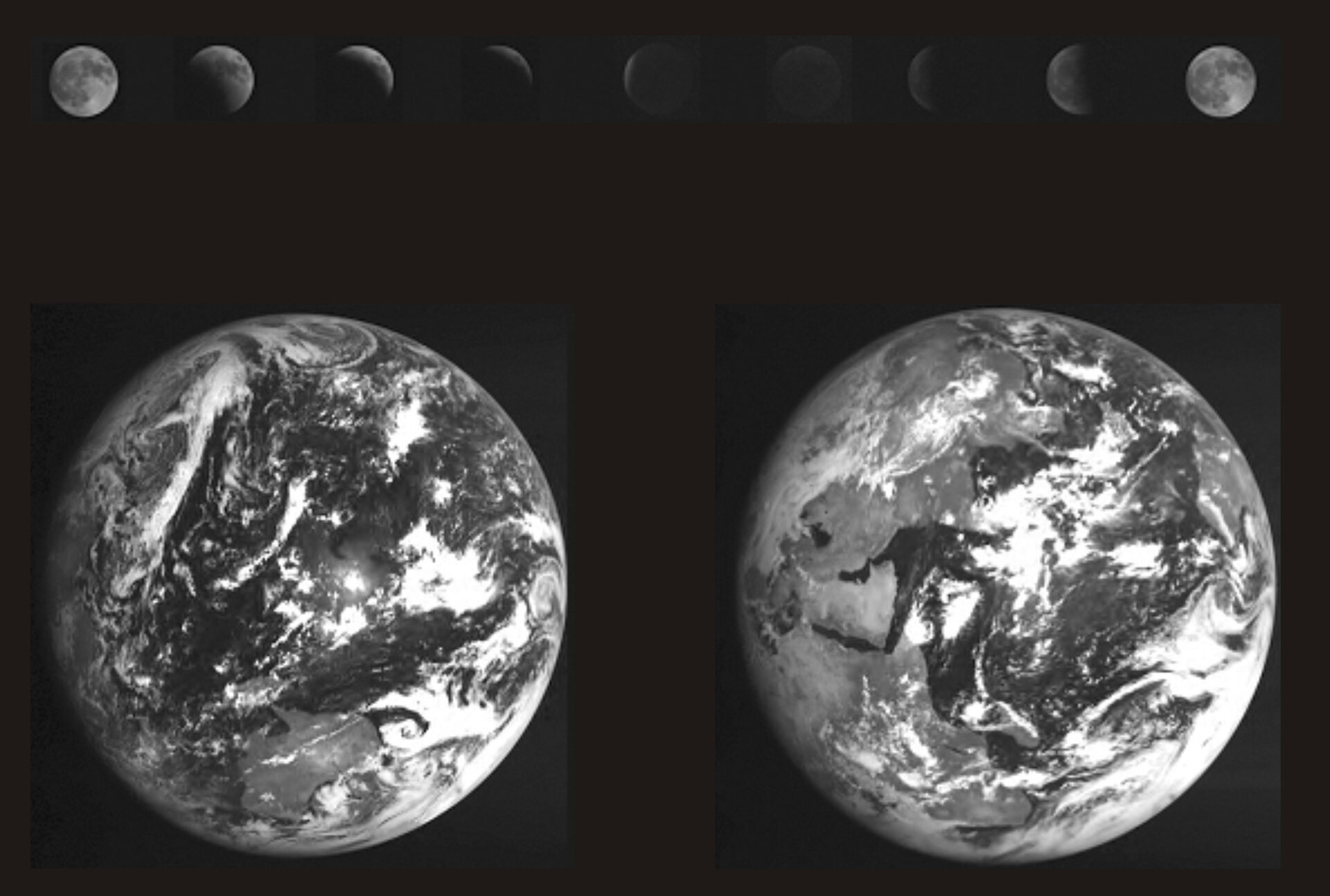 Earth and an eclipsed Moon

SMART-1, ESA’s first mission to the Moon, captured this series of unique images of our home planet Earth and the Moon during a total lunar eclipse.

This eclipse took place on  28 October 2004, when SMART-1 was about 290 000 km away from Earth and about 660 000 km from the Moon. From its vantage point, the AMIE camera (Advanced Moon micro-Imager Experiment) could, for the first time, see and photograph both the Earth and Moon during a lunar eclipse.

The images were taken in visible light. Those of the Moon are shown in time sequence, from left to right, covering a period of about three and a half hours. The ‘totality’ phase, in the middle of the sequence when the Moon is completely inside the Earth’s shadow, lasted about an hour.

The images of the Earth were taken just before and after the eclipse. The size of the Earth and Moon is exactly as seen by SMART-1, but the distance between the two bodies, is not to scale (Earth and the Moon were farther apart than the field of view of AMIE and could not simultaneously fit within a single image). Earth is about 3.7 times larger than that of the Moon; their diameters are about 12 800 km and 3500 km, respectively. As SMART-1 was farther away from the Moon than from Earth, the difference appears exaggerated.

A partial lunar eclipse will be visible for many Earth-based observers this week, on 16-17 July. For observers in Europe it will begin late in the evening of 16 July and conclude in the early hours of 17 July. Partial lunar eclipses occur when the Earth moves between the Sun and the full moon, but they are not precisely aligned, so only part of the Moon’s surface moves into the darkest part of Earth’s shadow.

SMART-1, short for Small Missions for Advanced Research and Technology-1, was launched on 27 September 2003. For 14 months it followed a long, spiralling trajectory around Earth towards the Moon as it tested new technologies, including solar electric propulsion. It orbited the Moon from 15 November 2004 until 3 September 2006, providing a comprehensive inventory of key chemical elements in the lunar surface and taking thousands of images.

The Moon has provided the focus of many missions subsequently, but it did not receive human visitors since 1972. ESA and international partners are now looking forward to the next era of human exploration, and to better understand the resources available on the Moon to support human missions longer-term. While Apollo 11 touched down for the first time on the near side of the Moon 50 years ago, it is time to explore the far side, examine different types of lunar rocks there to probe deeper into the Moon’s geological history and to find resources like water-ice that are thought to be locked up in permanently shadowed craters near the Moon’s south pole.