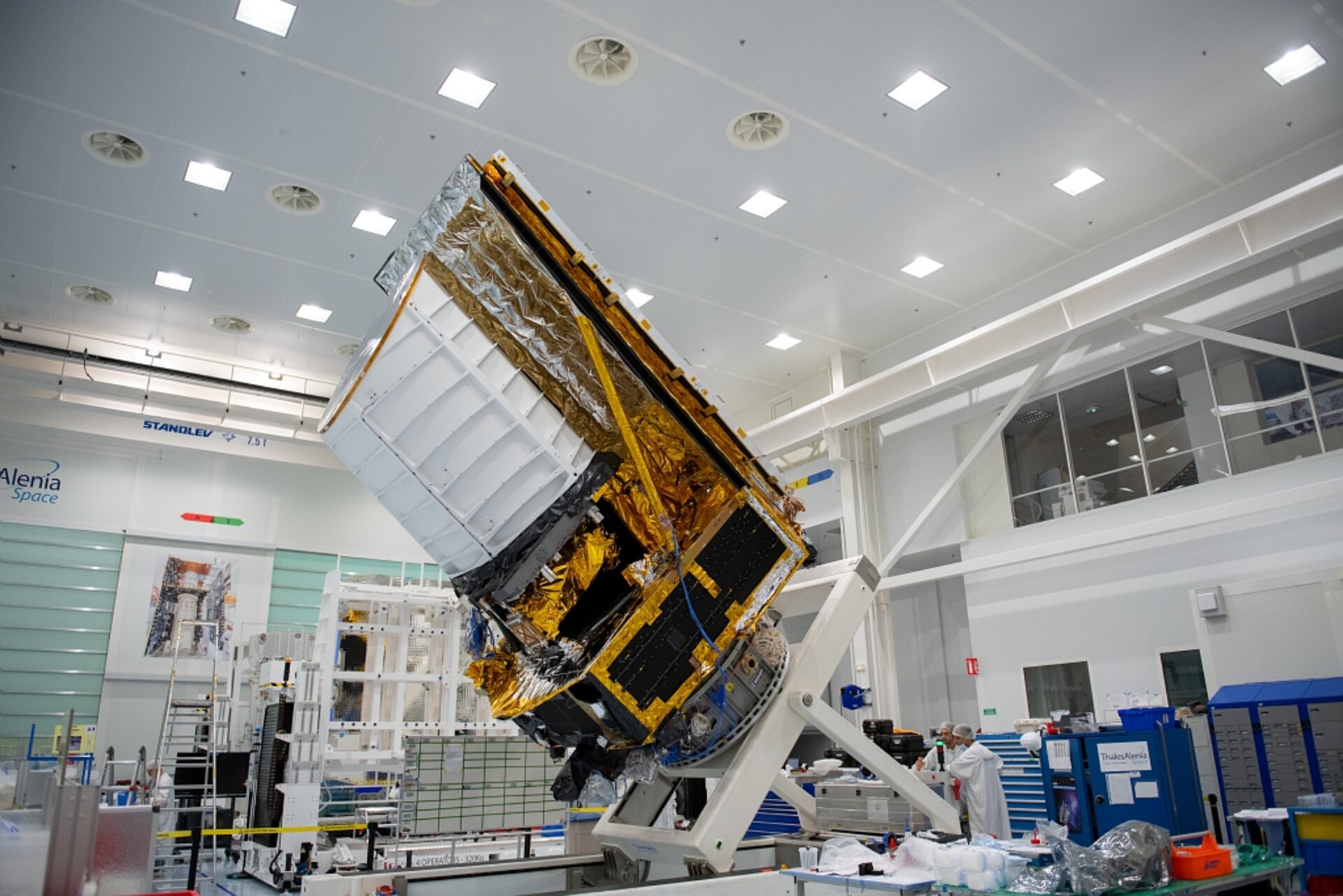 Structural and thermal model of the Euclid satellite

The structural and thermal model of the Euclid satellite recently completed its thermal qualification tests at Thales Alenia Space’s premises in Cannes, France. Integrated in near-flight configuration, including the payload and service modules, the satellite model is ready to undergo mechanical vibration tests in coming weeks.

Euclid is a medium-class mission in ESA's Cosmic Vision programme to investigate the expansion of our Universe over the past ten billion years, probing cosmic epochs from before the expansion started to accelerate, all the way to the present. To this aim, the mission will survey galaxies at a variety of distances from Earth, using a 1.2 m diameter telescope with two instruments – the visual imager (VIS) and the near-infrared spectrometer and photometer (NISP) – and covering an area of the sky equivalent to more than 35 percent of the celestial sphere.

By making use of both weak gravitational lensing, which measures the distortion of distant galaxies caused by intervening matter, and baryonic acoustic oscillations, based on measurements of the clustering of galaxies, Euclid will capture a 3D picture of the evolving distribution of both dark and ordinary (or baryonic) matter in the cosmos. This will enable scientists to reconstruct the past few billion years of the Universe's expansion history, estimating the acceleration caused by the mysterious dark energy to percent-level accuracy, and possible variations in the acceleration to 10 percent accuracy.

The satellite model shown in this photo is not the so-called flight model – the one that will be eventually launched – but it contains flight-worthy spare parts. From a mechanical point of view, it is identical to the flight model, and it allows engineers to apply extreme thermal and mechanical stresses during testing, without having to subject the delicate flight hardware to same processes. These tests, which will soon involve vibrations using a large shaker to simulate launch conditions, are performed to determine whether the thermal and mechanical properties of the actual hardware correspond to the predictions.

In order to reach Euclid’s ambitious science goals, the main design drivers include the quality and stability of the integrated optical system; the speed and completeness of its sky survey capability; accurate and stable pointing; and the ability to reliably transmit to the ground the huge volumes of scientific data that the satellite will gather. The design proposed by Thales Alenia Space, the mission’s prime contractor, is based on the experience gained with ESA’s Herschel and Planck missions, which both demonstrated excellent performance in orbit and delivered extraordinary data to delve into the mysteries of our Universe.

In addition to that, a peculiarity of Euclid is that the satellite will maintain a very stable optical performance under the most extreme attitude changes that will occur during slew manoeuvres. The recent thermal vacuum tests have simulated and successfully proven the capability to maintain the thermal stability in these conditions. The next step will be to confirm that also the optical stability will be ensured, but this will only happen during the end-to-end test of the payload module flight model next year.

Meanwhile, integration and testing of the flight model of the Euclid telescope and service module have already started at the premises of Airbus in Toulouse, France and Thales Alenia Space in Turin, Italy, respectively. The two modules will be integrated in 2021, and the complete satellite will undergo final tests in preparation to launch, which is scheduled for 2022.