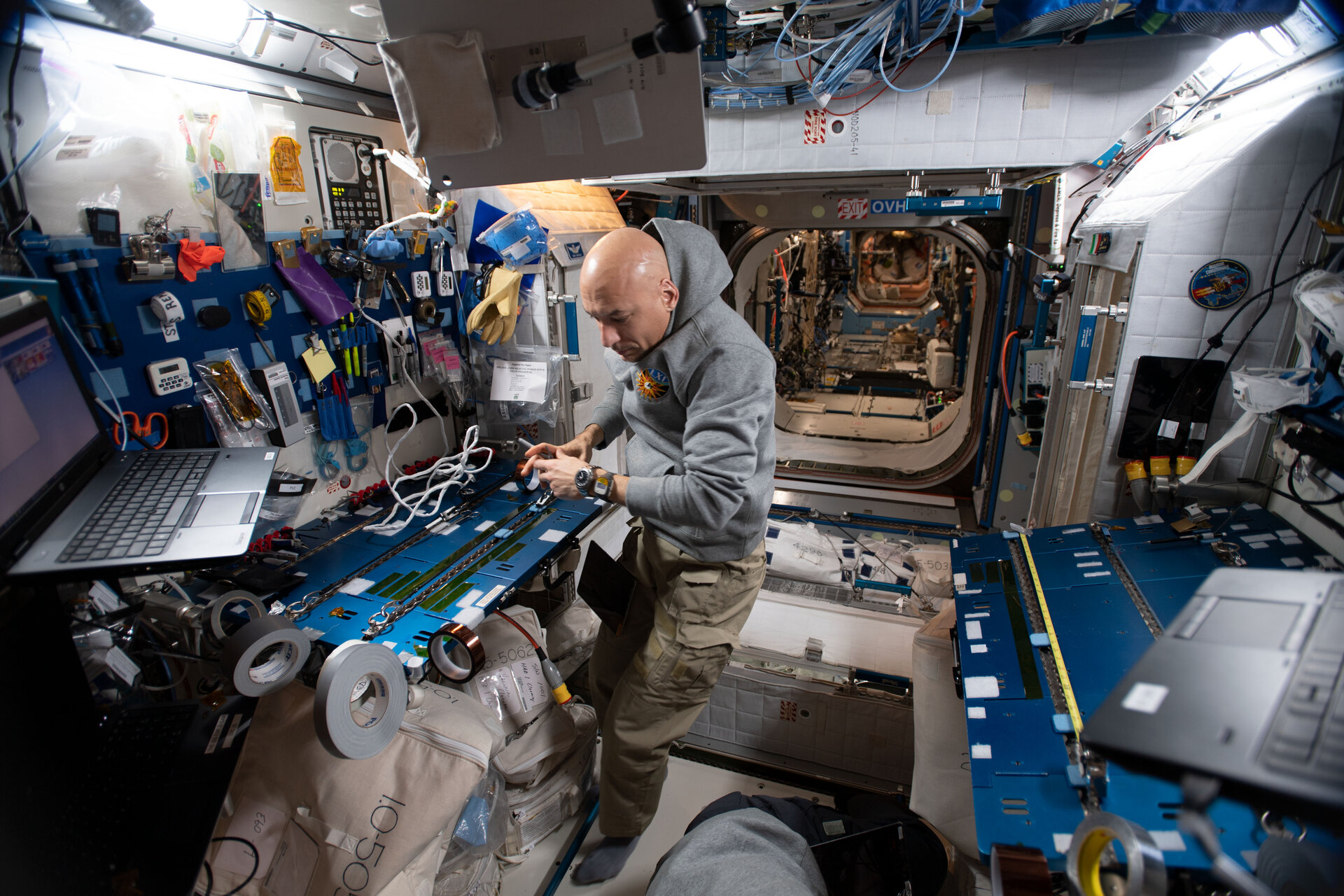 Four spacewalks in the coming weeks means a lot of prep work. ESA astronaut Luca Parmitano is gearing up the first in a series of historic extravehicular activities or EVAs taking place 15 November. He is pictured here creating tape flags that will be used to mark tubes during the spacewalks.

The spacewalks are to service the Alpha Magnetic Spectrometer or AMS, a cosmic ray detector that is searching for dark matter, antimatter, and completely unexpected physics well beyond its three-year mission.

Installed outside the International Space Station in 2011, the instrument has recorded over 140 billion particles to date along with their mass, velocity, and charge and direction of travel. This data is helping scientists track down the origin of cosmic rays and search for dark matter, the invisible matter component of our universe, as well as the antimatter counterpart that should have been created at the birth of our universe in the Big Bang.

As expected, the harsh environment of space began to wear down the facility. One by one, the cooling pumps keeping a vital detector at a constant temperature began to fail, affecting the data collection.
Plans for spacewalks to upgrade the pumps have been in the making for years to keep the science going.

Never intended to be serviced in orbit, the AMS maintenance will be complex.

For starters, AMS-02 has over 300,000 data channels. There are also no handrails or foot restraints installed around the instrument to access the cooling system that needs maintenance. New tools are also needed, as astronauts have never cut and reconnected fluid lines in a bulky spacesuit before.

Luca trained well in advance for these spacewalks at NASA’s Johnson Space Center in Houston, USA. New tools and procedures were extensively tested, with a lot of know-how drawn from the last series of complex spacewalks to extend the life of a valuable space instrument, the Hubble Space telescope.

The pair will be supported by NASA astronauts Christina Koch and Jessica Meir who will operate the Canadarm2 robotic arm from inside the Station. This will help position the astronauts around their hard-to-reach work site, located on top of the Station’s S3 Truss structure between a pair of solar arrays and radiators.

The entire spacewalk is expected to take around six hours and it will set the scene for at least three more.

The spacewalk will be streamed live on ESA Web TV from 12:50 CET (11:50 GMT) and ESA’s Facebook page. The first two hours of the broadcast will feature commentary from astronaut and operation experts at ESA’s astronaut centre in Cologne, Germany, as well as a live cross with scientists at the CERN European Laboratory for Particle Physics.

Got questions about AMS, the spacewalk, and dark matter? Tweet your questions to @esaspaceflight or @cern using #SpacewalkForAMS. Experts will answer them throughout the day.