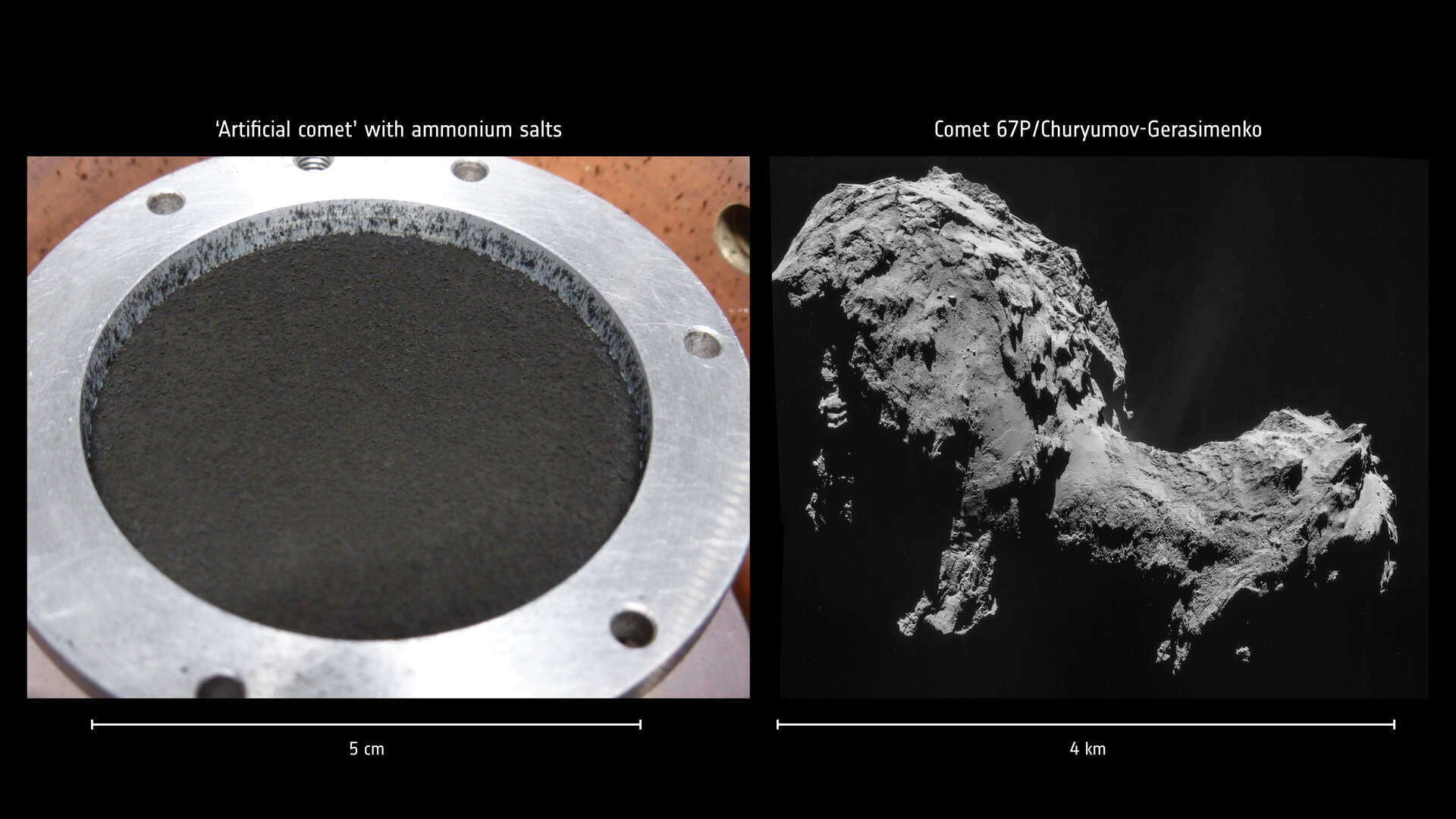 Scientists have detected ammonium salts on the surface of Comet 67P/Churyumov-Gerasimenko (shown in this image on the right) by analysing data collected by the Visible, Infrared and Thermal Imaging Spectrometer (VIRTIS) on ESA’s Rosetta mission between August 2014 and May 2015.

The new study, led by Olivier Poch of Institut de Planétologie et d’Astrophysique de Grenoble, France, and published in the journal Science, adds to the complementary measurements obtained in the comet’s atmosphere, or coma, using another instrument, the Rosetta Orbiter Spectrometer for Ion and Neutral Analysis (ROSINA), which were published in Nature Astronomy earlier this year.

As VIRTIS mapped the comet during the first half of Rosetta’s mission, the data revealed how its surface is as dark as coal, and slightly reddened by a mixture of carbon-based compounds and opaque minerals. The instrument also spotted local patches of water and carbon dioxide ice, along with a puzzling but almost ubiquitous absorption feature around the infrared wavelength of 3.2 µm. The nature of the compound that could cause such a feature, however, remained unclear until now.

To solve the enigma, a team of scientists have been creating ‘artificial’ cometary surfaces in the laboratory (an example is shown in this image on the left), testing their properties and comparing them to the VIRTIS observations. With this aim, the scientists have produced fine particles of water ice containing dark dust grains and a variety of compounds. Then, they exposed these particles to cometary-like conditions – vacuum and low temperature. After several hours, all the ice had sublimated, leaving a surface made of porous dust, analogous to a cometary surface.

The result of such experiments indicate that the mysterious absorption feature observed by VIRTIS at Comet 67P is predominantly due to salts of ammonium (NH4+), which are mixed with dark dust and detected on all kinds of terrains across the comet.

The presence of these salts might considerably increase the amount of nitrogen that scientists had previously expected to find on this comet, and possibly on other comets as well. The findings agree with the recent detection, by the ROSINA instrument on Rosetta, of gases produced by the sublimation of ammonium salts on dust grains ejected from the comet.

A similar absorption feature has also been observed on several asteroids, both in the main belt and in Jupiter’s Trojan family, as well as on Jupiter’s moon Himalia, suggesting that these bodies contain ammonium salts, too. The presence of these salts might hint at a link in the chemical composition between asteroids, comets and possibly the proto-solar nebula, providing a tantalising scenario for the delivery of nitrogen – a key element for the chemistry of life as we know it on Earth – to the inner planets of the Solar System.