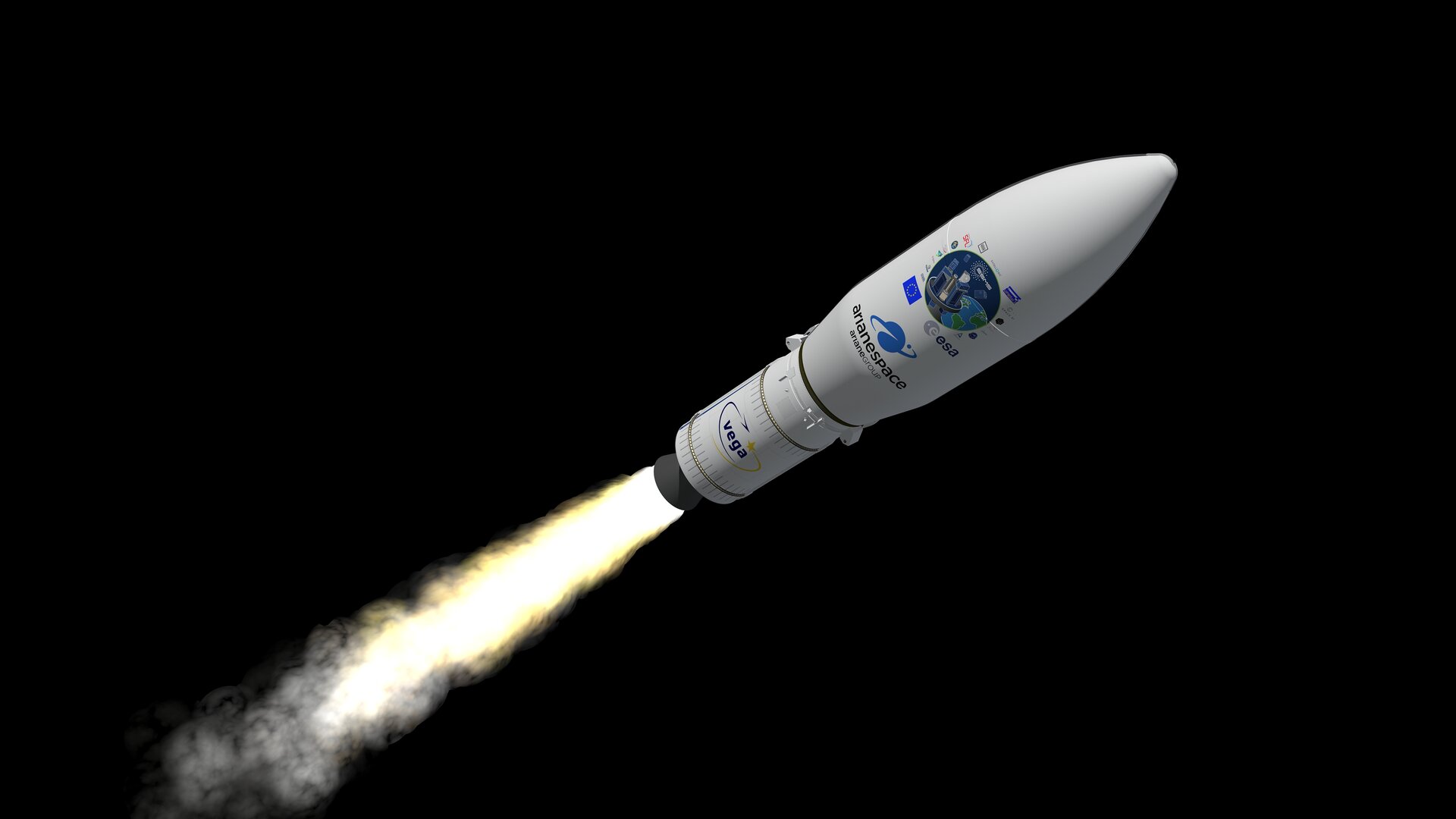 Artist's view of Vega VV16 with the Small Spacecraft Mission Service (SSMS) dispenser and SAT-AIS.
Visible are the Zefiro-9 upper stage, the Attitude Vernier Upper Module (AVUM) and the SSMS dispenser with its payload of satellites.

Multiple satellites will be launched at once on the Vega VV16 mission. This flight will demonstrate the modular SSMS dispenser resting on its upper stage intended to bring routine affordable launch opportunities for light satellites from 1-kg CubeSats up to 400-kg minisatellites.

Until now the smallest classes of satellites – all the way down to tiny CubeSats, built from 10 cm modular boxes – have typically ‘piggybacked’ to orbit. They have to make use of any spare capacity as a single large satellite is launched, meaning their overall launch opportunities are limited.

SAB Aeropsace in the Czech Republic and Bercella in Italy designed and manufactured this modular dispenser for ESA’s Vega prime contractor Avio. The component structures are made of very low-density aluminium ‘sandwich’ panels protected by carbon fibre reinforced polymer skins. This makes it very lightweight and rigid.

The SSMS comprises two main sections, the hexagonal lower section takes up to a dozen CubeSats or six small satellites while the upper section is used for micro, minisatellites and small satellites. Both sections can also be used independently.

A central column, tower or hexagon, a supporting platform, adjustable rods and dividers are assembled to suit each mission. For this flight, a configuration called FLEXI-3, weighing just 330 kg is being used.
This demonstration flight aims to prove the technical and financial viability of the rideshare service. ESA has collaborated with the European Union, which has partly funded this mission within the Horizon 2020 programme. This is part of the Contribution Agreement between ESA and the EU on space technology activities signed on 16 April 2019.

The ESAIL mission is a joint ESA LuxSpace project in an effort to extend the monitoring of maritime traffic beyond existing land-based tracking of Automatic Identification Systems (AIS) through the means of an array of microsatellites: SAT-AIS.