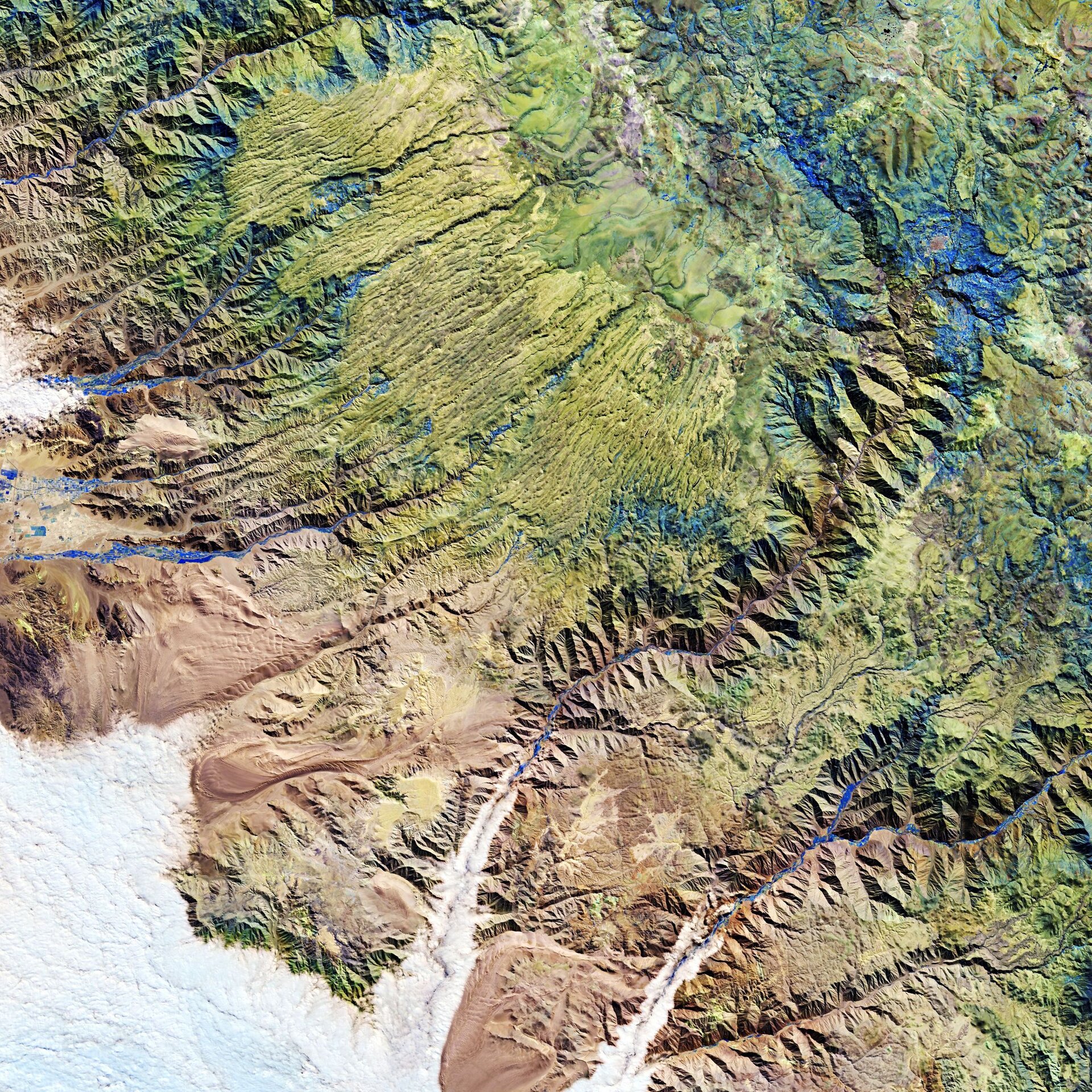 The Andes mountains, in southern Peru, are featured in this false-colour image captured by the Copernicus Sentinel-2 mission. This image was processed in a way that makes vegetation appear blue, while irrigated vegetation and agriculture is visible in bright blue.

The Andes are considered the longest continental mountain range in the world. They extend around 7000 km through seven South American countries – from Venezuela in the north all the way to Chile in the south.

The mountain range is the result of the Nazca and Antarctic tectonic plates moving under the South American plate in a geological process called subduction. Wind and water erosion are also a major factor for the shaping of the landscape.

In this image, captured on 16 June 2020, parts of the Ica, Ayacucho and Arequipa Regions in Peru are featured. Streams of water flowing from the high altitudes, and through the valleys, provide water for irrigation to the nearby agricultural fields. Some of these agricultural plots can be seen in bright blue in the image.

The small town of Puquio, with an elevation of over 3000 m, can be seen in the top right of the image – surrounded by vegetation. Directly to the left of Puquio, lies the Pampa Galeras National Reserve. This reserve protects the habitat of the threatened vicuña, a wild camelid which live in the high alpine areas of the Andes.

The clouds in the bottom-left of the image are an example of marine stratocumulus. These low-lying clouds are caused by cooler waters in the Pacific Ocean being pulled up to the surface, cooling the air above it, and causing water vapour to condense into water droplets and, eventually, clouds. Marine stratocumulus clouds often develop off of Peru, with prevailing winds pushing the clouds inland. As the clouds are low, they are easily blocked by coastal mountains and hills, such as the Andes.

Under the small cloud in the upper left of the image, lies the city of Nazca. Northwest of Nazca, the famous site of the Nazca lines can be found (not visible). The Nazca lines are a group of geoglyphs, or drawings, etched into the surface of the arid plain. The figures depict various plants, animals and many other shapes and extend over an area of around 500 sq km.

Copernicus Sentinel-2 is a two-satellite mission. Each satellite carries a high-resolution camera that images Earth’s surface in 13 spectral bands. The mission is mostly used to track changes in the way land is being used and to monitor the health of vegetation.