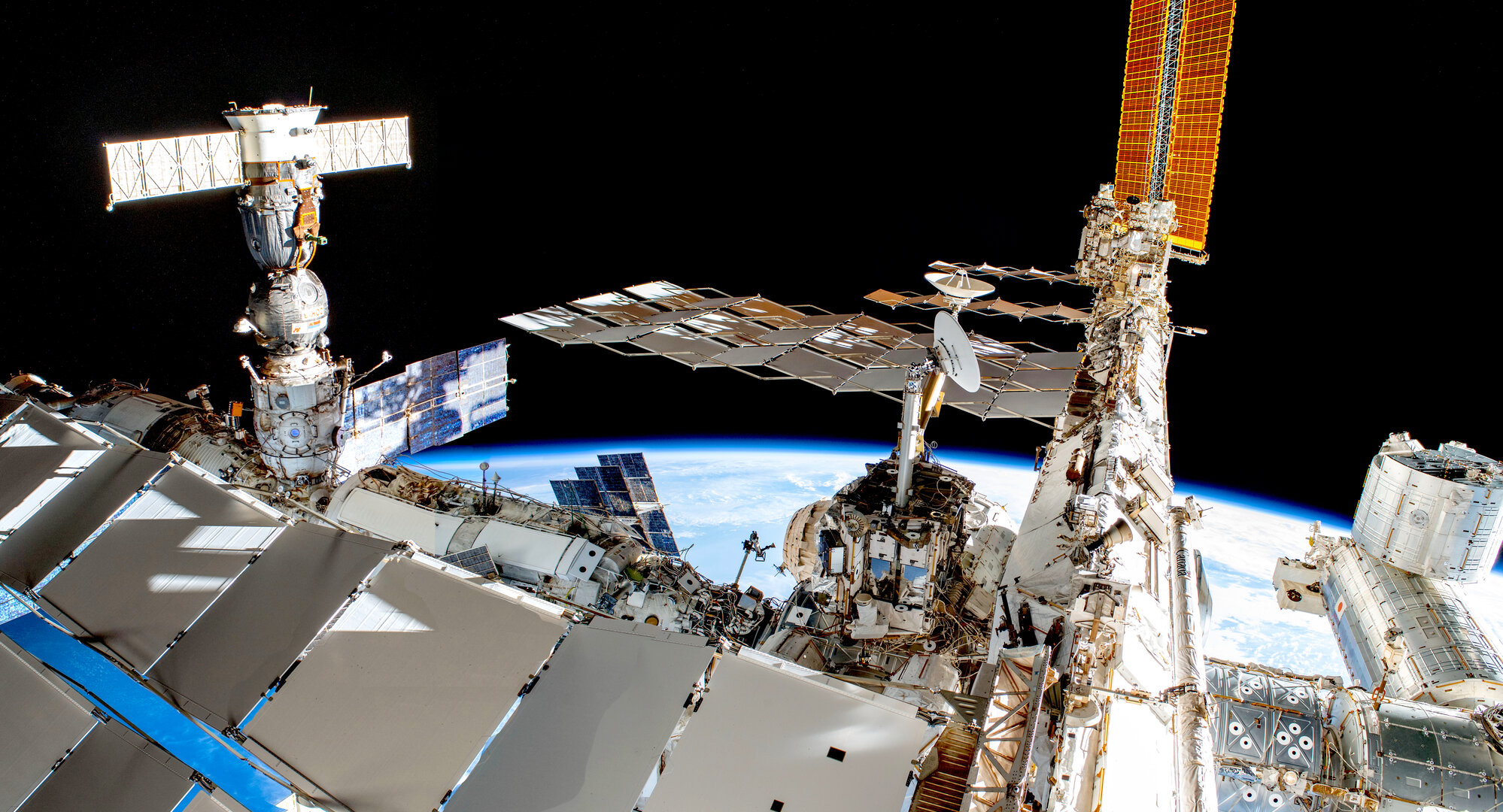 This panorama of the International Space Station is a wider view of what ESA astronaut Luca Parmitano was capturing on camera during the first of a series of historic spacewalks that took place in November 2019.

Author, journalist and researcher Lee Brandon-Cremer created this photo by stitching together three images taken by Luca as he made his way to the worksite during the first Extravehicular Activity or EVA to service the Alpha Magnetic Spectrometer (AMS), the Station’s dark matter detector.

"For every spacewalk there are thousands of images taken. Sometimes a few images jump out at me,” he explains. “One day I realised I could stitch these images together to expand the scene and show what the astronaut sees in a broader sense.”

To create this view, Lee first went looking for images with common points. This proved tricky: of the 1000 or so images he scanned, he found three that could be worked into two expanded photos of the Space Station.

He then joined and lightly edited the images to create a smooth photograph, a technique referred to as “stitching”.

In the final image you can see the white panel radiators that keep the Space Station cool. The spacecraft on the left is a Soyuz. On the right is the Kibo module, with Japanese flag visible. The Space Station is flying to the right in this picture.

Nowadays we are spoiled for space imagery. From satellites circling the Earth and spacecraft taking selfies to astronaut snaps from the International Space Station, there is no shortage of photographs at which to marvel – and they are easy to access.

Aside from the critical role these images play in aiding scientific studies of Earth, the Solar System and outer space, they are important tools for science communication and public engagement.

One advantage of space imagery made public is how it engages citizen scientists and students all over the world. Take two projects as examples:

Cities at Night asks residents to identify major cities at night as seen by astronauts from the Space Station to help map out and combat light pollution. The Climate Detectives school project tasks students with investigating a local climate problem and proposing a solution by studying Earth observation satellite imagery.

For others like Lee, the images are a source of inspiration and creativity.

“It’s truly thrilling for me to recreate these broader views and it makes me wonder how many more unique views like this one captured by Luca are hiding in space agency archives,” Lee adds.

Download the high resolution image in the link above.