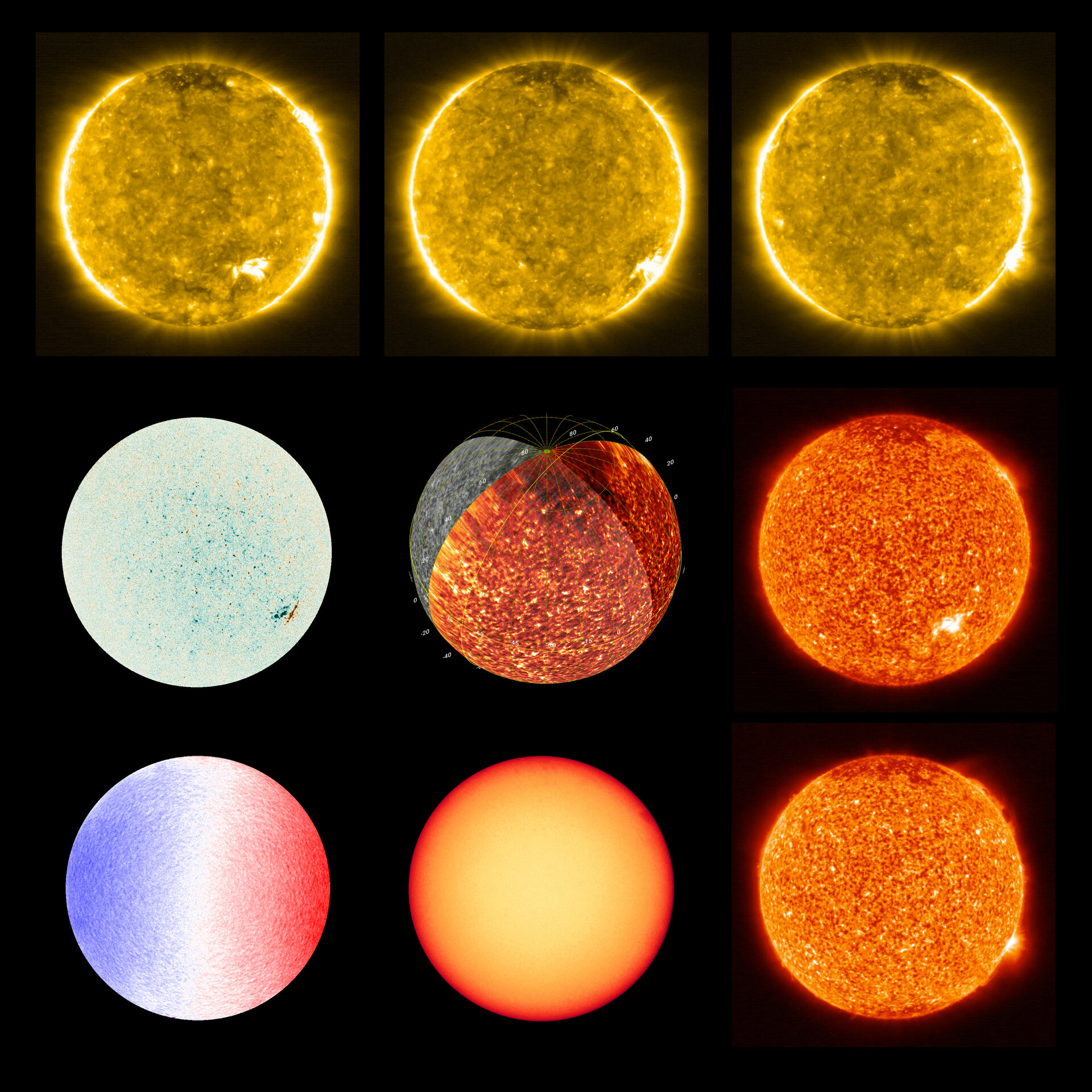 ESA’s Solar Orbiter is revealing the many faces of the Sun. The Extreme Ultraviolet Imager (EUI) Full Sun Imager (FSI) took the images in the top row and far right column across the week following 30 May 2020, and contributed to the central image.

The yellow images, taken at the extreme ultraviolet wavelength of 17 nanometres, show the Sun’s outer atmosphere, the corona, which exists at a temperature of around one million degrees. The red images, taken at a slightly longer wavelength of 30 nanometres,  show the Sun’s transition region, which is an interface between the lower and upper layers of the solar atmosphere. In this region, which is only about 100 km thick, the temperature increases by a factor of up to 100 to reach the one million degrees of the corona.

Solar Orbiter will travel around the Sun and out of the ecliptic plane, which loosely defines where the planets orbit. So, EUI will be able to image the far side of the Sun as well as the solar poles. The middle image shows projected, simultaneous solar images from EUI FSI (red) at Solar Orbiter’s position during its first perihelion, the closest point in its orbit to the Sun, and the NASA Solar Dynamic Observatory mission (gray) in Earth orbit.

The image in the middle of the first column, was taken by the Polarimetric and Helioseismic Imager (PHI) instrument on 18 June 2020. It shows a 'magnetic map of the Sun' that reveals the magnetic field strengths on the solar surface. In the bottom right-hand corner there is the beginning of an active region. It can be seen from the closely neighbouring black and white regions, which signify opposite magnetic polarities. In times of increased magnetic activity, plots like this will show many more such active regions.

The blue, white and red image at bottom left is a tachogram of the Sun, again taken with PHI. It shows the line of sight velocity of the Sun, with the blue side turning to us and the red side turning away. In times of increased magnetic activity, this plot will become more turbulent.

Next to this image, is a view of the Sun in visible light, taken by PHI on 18 June 2020. There are no sunspots because there is very little magnetic activity.