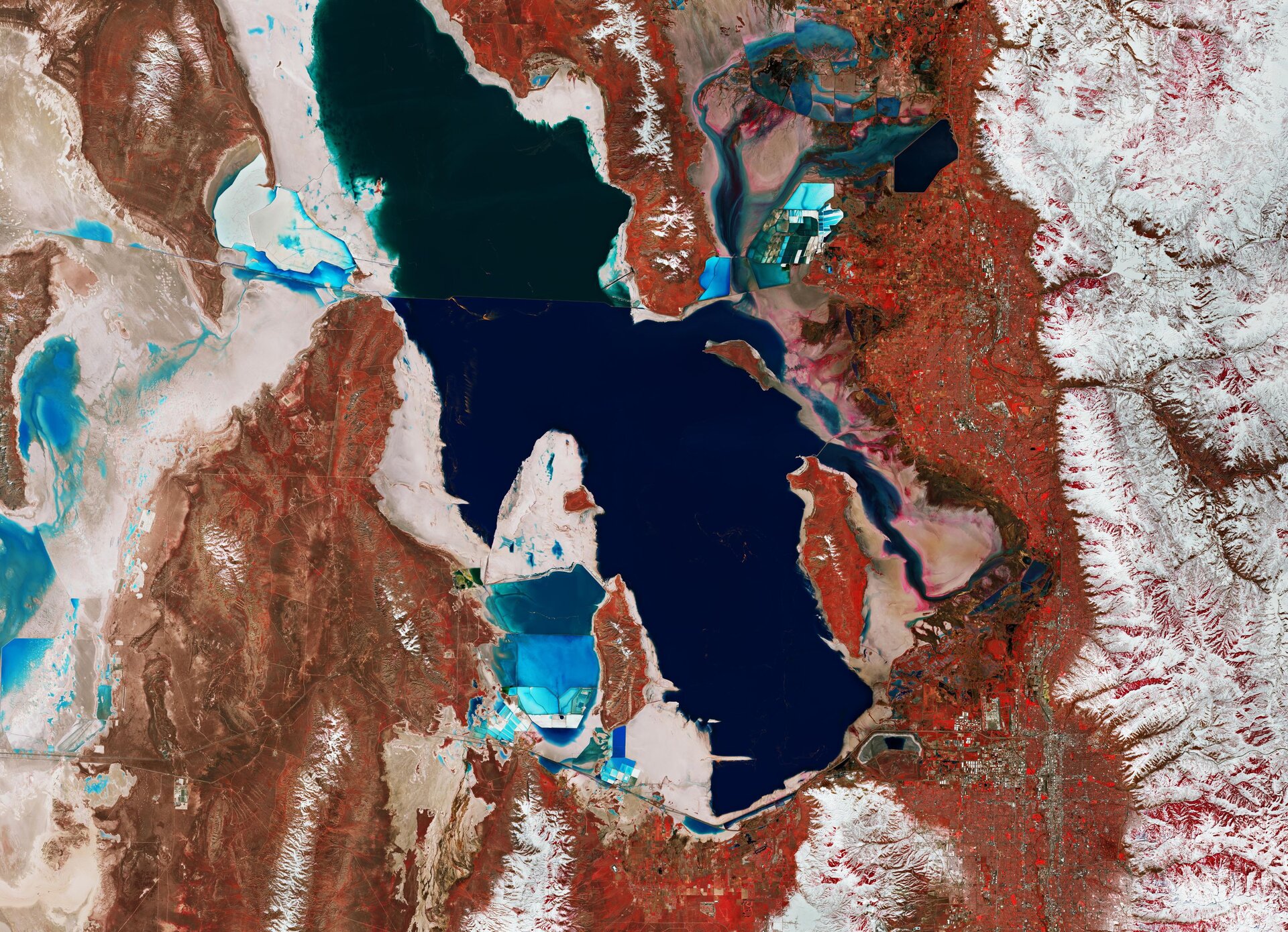 Utah’s Great Salt Lake and its surroundings are featured in this false-colour image captured by the Copernicus Sentinel-2 mission.

The lake is fed by the Bear, Weber and Jordan rivers which, together, deposit around 1 million tonnes of minerals in the lake each year. As the lake is endorheic, meaning without an outlet, the water evaporates which leads to a very high salt concentration. It greatly fluctuates in size, depending on the rates of evaporation and the flow of the rivers that feed it.

The distinct colour differences in the lake are caused by the Lucin Cutoff, an east-west causeway built to create a shorter route. The railroad line is visible as a sharp line cutting across the top part of the lake. This acts as a dam, preventing the waters to mix, leading to the north basin having a much higher salinity than the southern, freshwater side of the lake.

As the lake’s main tributaries enter from the south, the water level of the southern section is slightly higher than that of the northern part. Several small islands, the largest of which are Antelope and Fremont, lie in the southern part of the lake.

The lake’s varying shoreline consists of beaches, marshes and mudflats. The bright, turquoise colours visible on both sides of the lake are evaporation ponds, from which various salts are collected in commercial operations. Although it is commonly referred to as America’s Dead Sea, the lake is nevertheless an important habitat for millions of native and migratory birds. It is also home to several types of algae, brine shrimp and brine flies.

The lake’s basin is defined by the foothills of the snow-capped Wasatch Range, to the east, and by the Great Salt Lake Desert, a remnant of the bed of Lake Bonneville, to the west. This part of the desert is known as the Bonneville Salt Flats and is used as an automobile raceway, as the flat and smooth salt beds make the area ideally suited for speed trials. Utah’s capital, Salt Lake City, is visible in the bottom right of the image.

This image was processed in a way that included the near-infrared channel, which makes vegetation appear in red, while rocks and bare soil appear in brown. Copernicus Sentinel-2 is a two-satellite mission. Each satellite carries a high-resolution camera that images Earth’s surface in 13 spectral bands. The mission’s frequent revisits over the same area and high spatial resolution allow changes in inland water bodies to be closely monitored.

This image, which was captured on 17 March 2019, is also featured on the Earth from Space video programme.