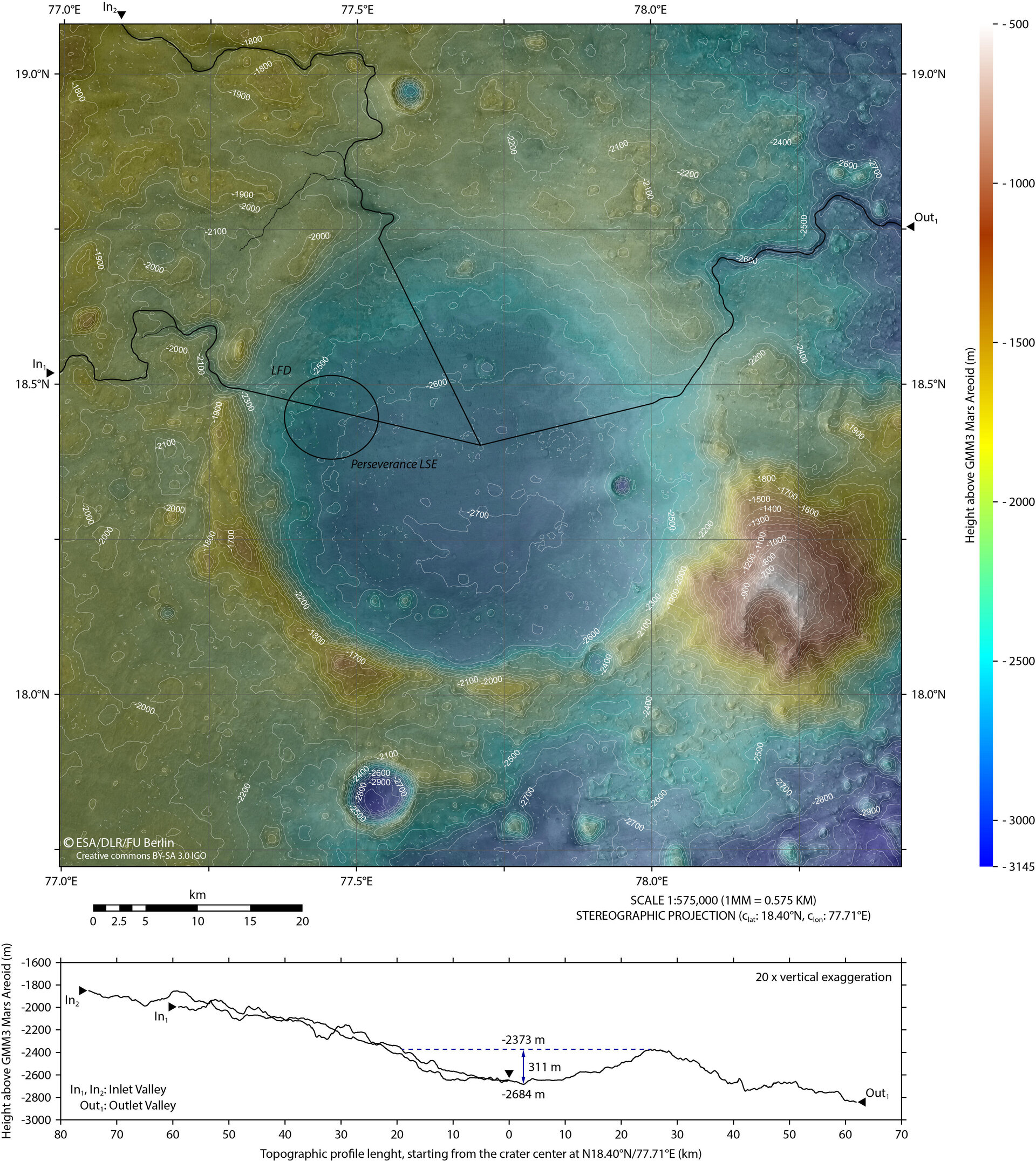 On 18 February 2021, NASA’s Mars 2020 spacecraft will touch down on the surface of Mars. The mission, which launched in July of this year and is carrying a rover named Perseverance on board, will seek signs of ancient life on the Red Planet, and collect samples of rock and soil so that these can later be returned to Earth by ESA and NASA.

Mars 2020 will land in Jezero crater, the intriguing feature shown in this new topographic map from ESA’s Mars Express. The landing zone for the mission is highlighted by the black ellipse. This map was created using observations from Mars Express’ High Resolution Stereo Camera (HRSC), and shows the topography of the landscape (as indicated by the coloured bar to the right of the frame, and the associated elevation graph to the bottom). Regions of higher elevation are shown in reds and oranges, while lower dips and depressions are highlighted in blues and greens.

Jezero is an impact crater of roughly 45 kilometres in diameter, and is thought to have once hosted an ancient lake. Evidence of this can be seen in the features scattered across the crater basin: deltas, inlet valleys (marked by solid black lines that wind into the crater to the upper left), channels, and a smoother topography along the northern crater rim (where material was swept up by flowing water) than the southern (where these materials were later deposited). Jezero also hosts a large outlet channel, as seen to the right of the frame (east) in shades of pale blue, and marked by a solid black line. In order to carve such a substantial valley, the crater must have once been replenished by a relatively constant supply of water. This is an exciting prospect in our hunt for life on Mars, as the carbonates and clay minerals thought to still be present in Jezero – which formed in the presence of ancient water – may have locked up signatures of past life.

Mars 2020 will explore the history and chemistry of Jezero to characterise such ancient lakeshore environments in detail – an essential step towards better understanding what early Mars was really like. One of Mars 2020’s key objectives is to collect samples for future return to Earth. This endeavour will require cooperative robotic missions from both NASA and ESA. Current plans for ESA-NASA Mars Sample Return rely on ESA’s small Sample Fetch Rover collecting the samples cached by Mars 2020’s Perseverance rover, before these are launched into Mars orbit by NASA. A further ESA mission, the Earth Return Orbiter, will then swoop in to collect the basketball-sized container of rock and soil samples and return these safely to Earth.

This map comprises observations gathered during Mars Express orbits 5252 and 5270, and covers an area of the martian surface located at approximately 18° N, 77° E.