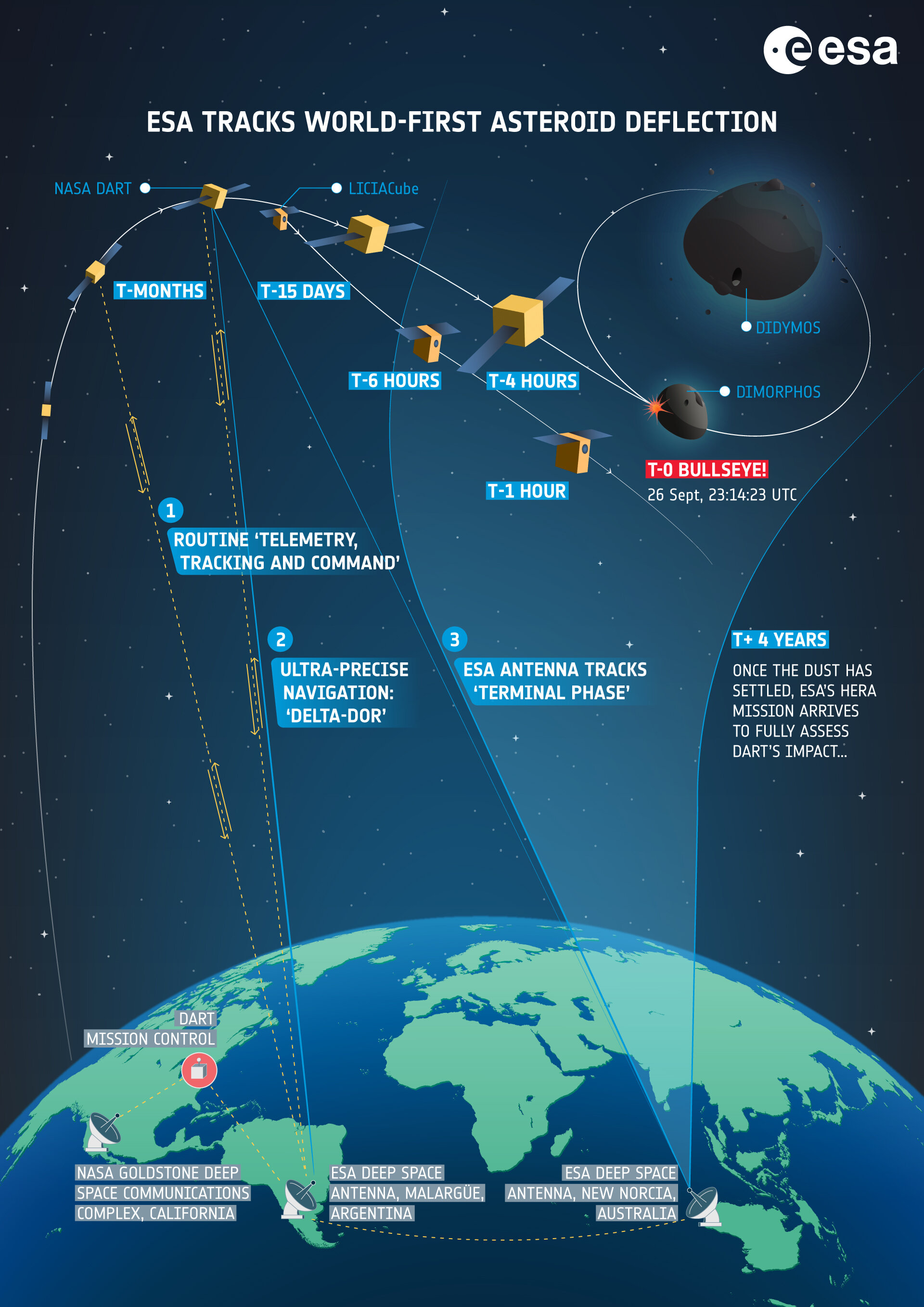 Next week, all eyes will be looking up as NASA intentionally crashes the 550 kg DART spacecraft into an orbiting asteroid at high speed. ESA’s Estrack network of ground stations, Europe’s ‘eyes on the sky’, will be particularly focused on the humanmade impactor, keeping track of it as it closes in on the 160-metre-wide moving target in the world’s first test of asteroid deflection.

Since May, ESA’s 35-metre Deep Space antenna in Malargüe, Argentina, has been helping to provide ultra-precise measurements of DART’s position with regular tracking time dedicated to the mission in the months leading up to impact. The station creates a geographical triangle on Earth when paired with the NASA antennas located in Canberra, Australia and the Goldstone in California. Tracking DART simultaneously from each location allows for an extremely precise determination of its location, orientation and speed. This method of tracking is known as Delta-DOR (delta - Differential One-way Range).

ESA’s Deep space antenna in Australia has also been receiving monthly status reports from DART. Such reports are ‘downlinked’ to Earth from the spacecraft and include details on its status, location and any commands it was given – all crucial information for NASA’s mission control.

Now in the final ten days before impact, tracking has ramped up even more as ESA’s Estrack network performs daily contacts with the spacecraft to fill the gaps in NASA Deep Space Network. Each of these ‘passes’, i.e. the period in which the spacecraft is visible and communicating with the antenna, lasts for about one hour every day until DART enters the final phase of its mission.

In the last few hours of DART’s life, it will send to Earth a constant stream of images revealing its target resolve into view from blurry mass to small asteroid, dramatically getting closer and larger until … bullseye! This will be the first ever non-fiction movie depicting real-life asteroid deflection, and it’s critical that every scene arrives back home.

“It is vital for mission success that there are no gaps in coverage during DART’s terminal phase, and so antennas around the world will be working in unison, backing each other up and filling in any gaps in NASA’s Deep Space Network coverage – we cannot lose the link to DART for a moment,” explains Daniel Firre, ESA’s DART Service Manager.

During this final period starting 12 hours before impact and lasting a couple of hours after, ESA’s New Norcia station in Australia will provide a continuously updated stream of data and images from the mission. Data from DART will have travelled 11 million kilometres before it arrives at the 35-metre dish in Australia, all in about half a minute.

"Our giant dish in Australia will be in touch with DART as it crashes into Dimorphos. In the last minutes, data will stream in from the DRACO instrument onboard. This data will be used by scientists to estimate the mass of the asteroid, surface type and impact site,” explains Suzie Jackson, Maintenance & Operations Manager for the New Norcia ground station.

“In addition, the data from DART will be used at NASA’s mission control to adjust mission parameters, and it’s really important the information arrives as close to real-time as possible.”

Watch the impact live as data streams in from DART to ground stations around the globe, including ESA’s New Norcia station in Australia. The NASA programme starts at midnight CEST and will be streamed on ESA Web TV with contributions from ESA’s Hera mission team. Follow @esaoperations on Twitter for live updates from ESA’s mission control, home to Estrack HQ and the Space Safety Programme.