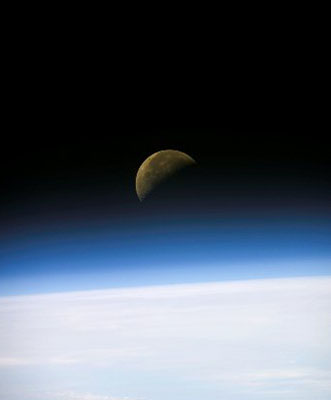 Millions of years ago, the Moon was much closer and bigger in the sky. It was also spinning much faster. Gradually, it slowed down. Today, the Moon completes one turn every 27 days, the same time it takes to travel once around the Earth. This means that we always see the same side of the Moon. The far side is always hidden from view.

The Moon has no light of its own. It shines by reflecting sunlight. Like the Earth, half of the Moon is in daylight and half is in darkness (night). Sometimes we see all of the day side – this is known as 'full Moon'.

Sometimes we see only a thin curved area of light, called a 'crescent'. Sometimes we cannot see the Moon at all, because we are looking at its night side. This is the 'new Moon'.

From the earliest times, people have watched the Moon appear to change shape from a thin crescent to full and back again. These 'phases' are the result of the Moon moving around the Earth once every 29½ days. This 'month' has been used to measure time around the world for thousands of years.