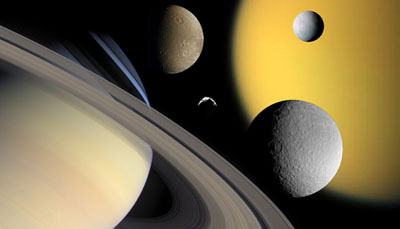 Moons are natural objects that orbit planets. Scientists usually refer to them as planetary satellites (human-made satellites are sometimes called artificial moons). There are about 170 moons in our Solar System. Most of them are in orbit around the gas giants Jupiter and Saturn. Small planets tend to have few moons: Mars has two, Earth has one, while Venus and Mercury do not have any.

Earth’s Moon is unusually large compared with the planet. Most moons are dwarfed by their nearby planet. However, some of the moons of Jupiter and Saturn are much larger than our Moon. Ganymede and Titan are bigger than the planet Mercury.

Their small size means that almost all moons are unable to hold onto atmospheres. Their weak gravity allows the gases to escape into space. The odd one out is Titan, the largest moon in Saturn’s system. Titan has a thicker, denser atmosphere than Earth. Nitrogen is the main gas in both of their atmospheres, but Titan has no oxygen and no life. Its surface is hidden by an orange haze. Some scientists think of Titan as a primitive Earth in deep freeze.

Some satellites, including our Moon, are thought to have been born during massive collisions, early in the history of the Solar System. The Moon formed from the cloud of debris that was left in orbit around the Earth. Others may have grown from a cloud of gas and dust that surrounded the giant planets when they were pulling in material. Most of the smaller moons are comets or asteroids that were captured when they passed too close to a large planet.