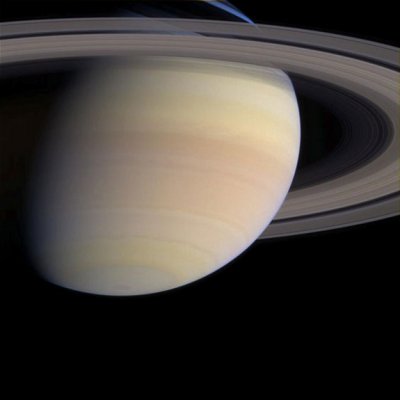 Saturn as seen by Cassini-Huygens

Saturn is the sixth planet from the Sun. It was thought to be the furthest of the planets until the telescope was invented.

Second only in size to Jupiter, Saturn is made mainly of the light gases hydrogen and helium. 764 Earths would fit inside Saturn, but the gas giant weighs only 95 times as much as our rocky world. If you could put all of the planets in a pool of water, Saturn is the only one that would float.

Despite its size, Saturn spins once in a little more than 10 hours. Its spin is so rapid that it bulges outwards at the equator, making it look like a ball that has been squashed.

In a telescope, Saturn appears a pale yellow colour. It has no solid surface, so what we are seeing are clouds that appear as light and dark bands. These clouds are blown along by very strong winds. Much of the heat that drives these winds comes from inside the planet. Above the cloud tops is a flat, disk-shaped system of rings.

Much of what we know about Saturn has come from the NASA-ESA Cassini-Huygens mission. The Cassini orbiter has been in orbit around the planet since 1 July 2004. It has been exploring many of Saturn’s moons, especially planet-sized Titan. It has also sent back remarkably detailed pictures and other data about Saturn’s thunderstorms, the thousands of icy ringlets and the magnetic field.

On 14 January 2005, Europe’s Huygens probe parachuted onto the hidden surface of Titan. It was the first soft landing on another planetary satellite (apart from our Moon). Orange Titan was found to be a strange, icy world where methane rain fills lakes and rivers.