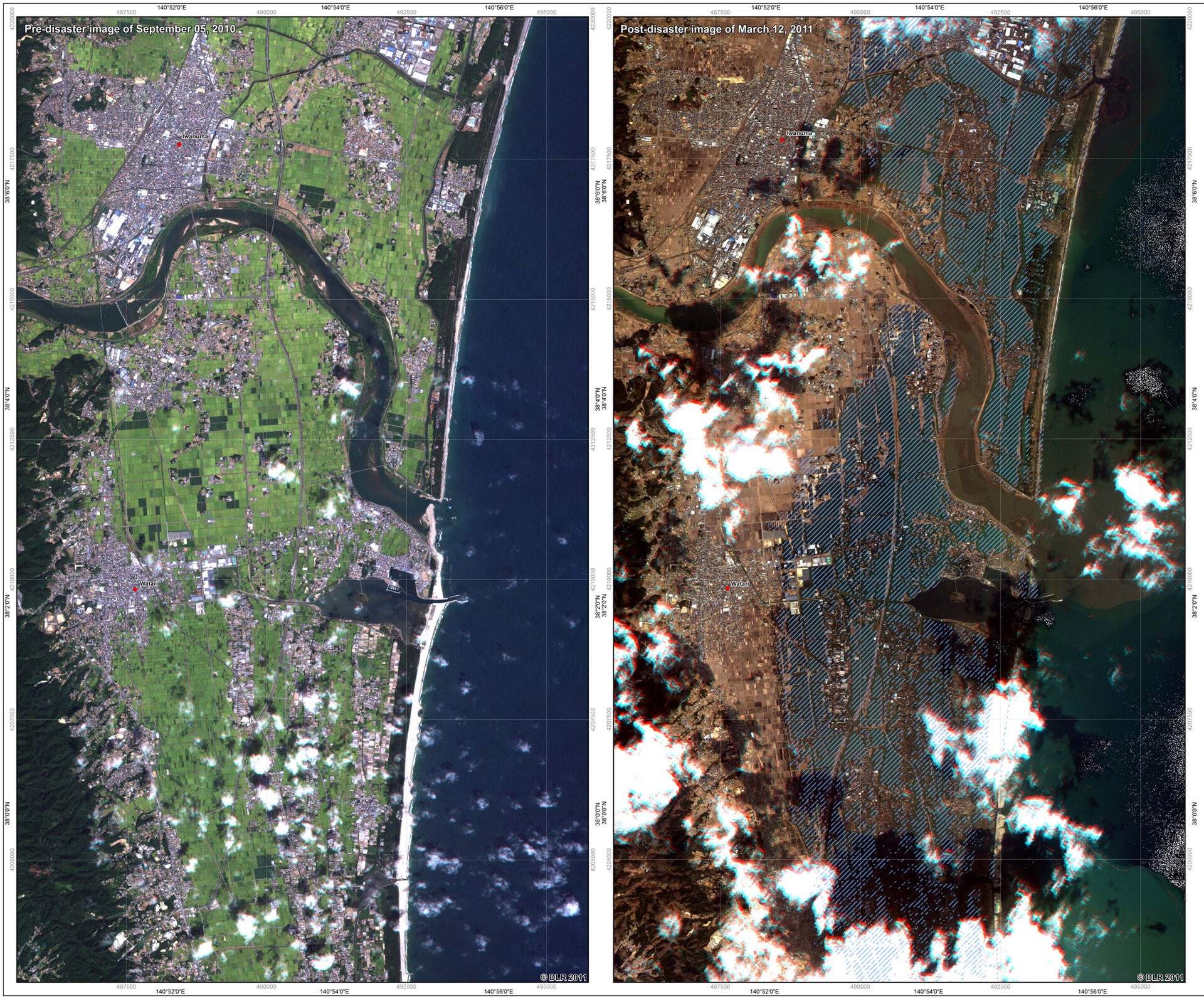 Following the massive earthquake and tsunami that hit Japan on 11 March, satellite imagery has been vital in providing a clear picture of the extent of devastation to aid the relief effort now underway.

In response to this event, which turned out to be the biggest earthquake Japan has suffered in living memory, the International Charter 'Space and Major Disasters' was triggered by the Cabinet Office of Japan the same day the earthquake struck.

As a result, satellite images from several space agencies and operators from around the world are being used to map and assess the stricken areas.

Founded 10 years ago, the International Charter is a unique mechanism to ensure that timely satellite images are made freely available to authorities and aid workers coping with the aftermath of a disaster.

By combining Earth observation data from different space agencies, the Charter allows resources and expertise from around the world to be coordinated for rapid response to major disasters.

The value of the initiative lies in the way it has been set up to gather and coordinate a range of different satellite data, turn them into usable products and provide a single access point to the products 24 hours a day, 7 days a week, and at no cost to the user.

Demonstrating the incredible power that Earth can unleash, the devastation caused by the 8.9-magnitude quake has left the world stunned.

Japan's northwestern coastline is thought to have shifted by as much as 4 m to the east and whole towns have been washed away by the tsunami, completely changing the landscape.

Satellite maps are providing essential information for search and rescue teams on the ground and for damage assessment. Before-and-after images show how the land has changed and where buildings and roads once stood.

Work is being coordinated by the Japan Aerospace Exploration Agency, JAXA, and the Asian Institute of Technology. Data are being used from a wide range of satellites such as Germany’s TerraSAR-X and RapidEye, France’s SPOT-5 and ESA's Envisat along with high-resolution optical imagery from US satellites.

Over 63 satellite acquisitions were made in the first 48 hours following the event. These are being used by relief teams and decision-makers responding to the disaster.

A large collaboration is at work to exploit data offering value-adding analysis with specialist centres from France (Sertit), Germany (DLR-ZKI) and the United Nations (UNITAR/UNOSAT), while JAXA provide dedicated mapping service to the Japanese authorities.

Over the coming weeks, access to updated satellite products will prove essential for continued crisis response and also to start precise damage assessment for recovery, rehabilitation and reconstruction.

Satellite data will also be used to help further our understanding of these geological threats and ultimately help with future warning systems.

Japan lies on the infamous Ring of Fire, an active zone that almost encircles the Pacific Rim. As such, Japan is listed as a 'supersite', an area known to be at high risk of seismic events.

The Geo-Hazard Supersites initiative, coordinated by the Group on Earth Observations, is exploiting 20 years of satellite radar observations to further our understanding of geological risk.

The aim is to exploit interferometric processing to provide very precise terrain deformation mapping before and during a seismic event to improve our understanding of the tectonic phenomena in Japan.

As another example of different space agencies working together, the initiative promotes research into geohazards by providing the worldwide scientific community with easy access to a full spectrum of datasets.