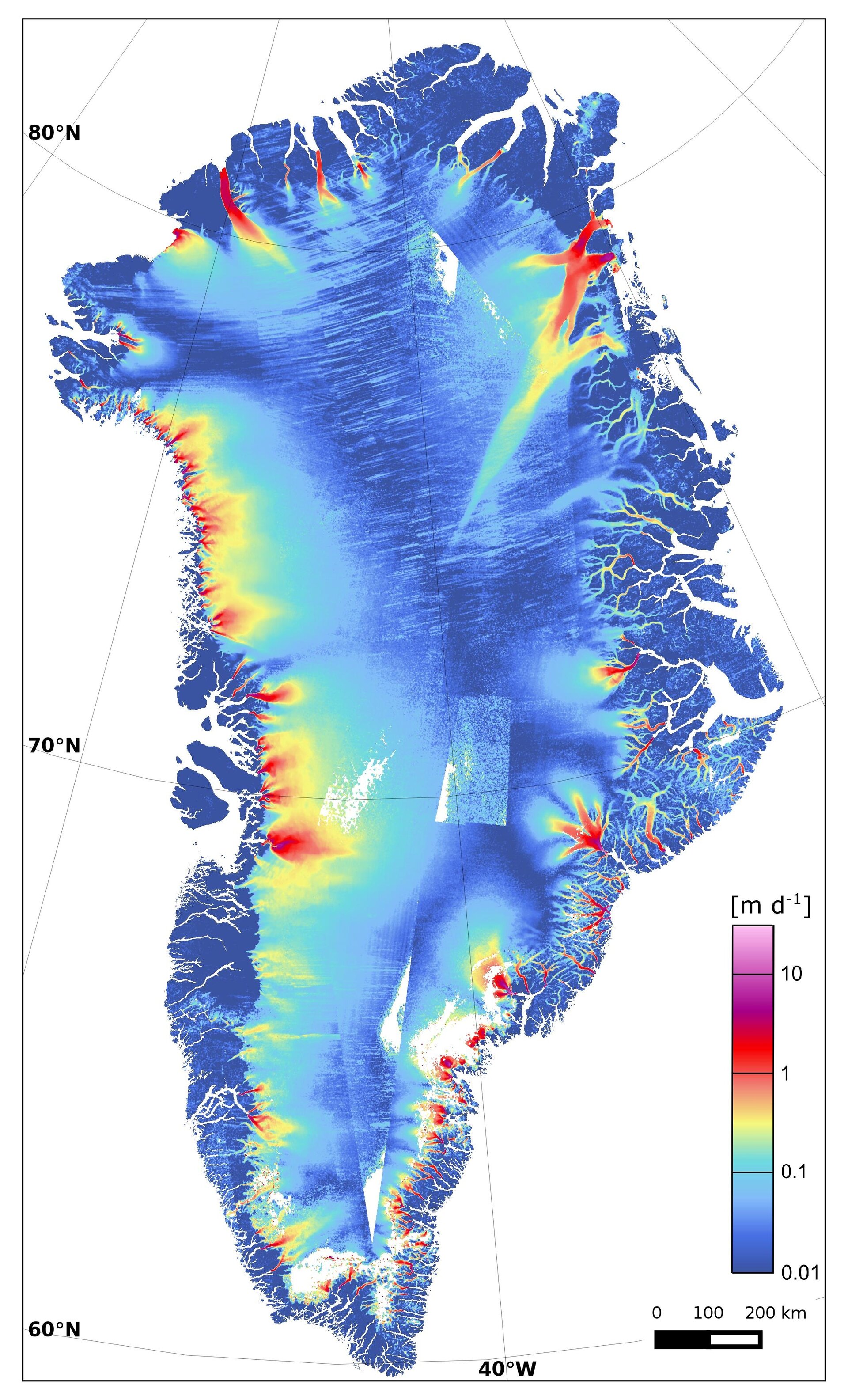 One of Greenland’s glaciers is losing five billion tonnes of ice a year to the ocean, according to researchers. While these new findings may be disturbing, they are reinforced by a concerted effort to map changes in ice sheets with different sensors from space agencies around the world.

It is estimated that the entire Zachariae Isstrom glacier in northeast Greenland holds enough water to raise global sea levels by more than 46 cm.

Jeremie Mouginot, from the University of California Irvine in the USA and lead author of the paper published in the journal Science, said, “The shape and dynamics of Zachariae Isstrom have changed dramatically over the last few years.

“The glacier is now breaking up and calving high volumes of icebergs into the ocean, which will result in rising sea levels for decades to come.”

As one of the first regions to experience and visibly demonstrate the effects of climate change, the Arctic serves as a barometer for change in the rest of the world. It is therefore critical that polar ice is monitored comprehensively and in a sustained manner.

In addition, the group relied heavily on data from Canada’s Radarsat-1 and -2, Germany’s TerraSAR-X and TanDEM-X, Japan’s ALOS and Italy’s Cosmo-Skymed to ensure a continuous record of ice-sheet changes through to the launch of Sentinel-1A.

The value of international organisations joining forces to understand aspects of our planet such as this cannot be underestimated.

These current findings are a prime example of how different satellite observations and measurements from aerial surveys are being used from various space agencies including ESA, the Canadian Space Agency, NASA, the German Aerospace Center, the Japan Aerospace Exploration Agency and Italy’s space agency, ASI.

Over the last nine years the Polar Space Task Group has been coordinating the collection of radar data over Greenland and Antarctica.

ESA radar observations going back to the ERS and Envisat satellites through to Sentinel-1A were used in the new study. 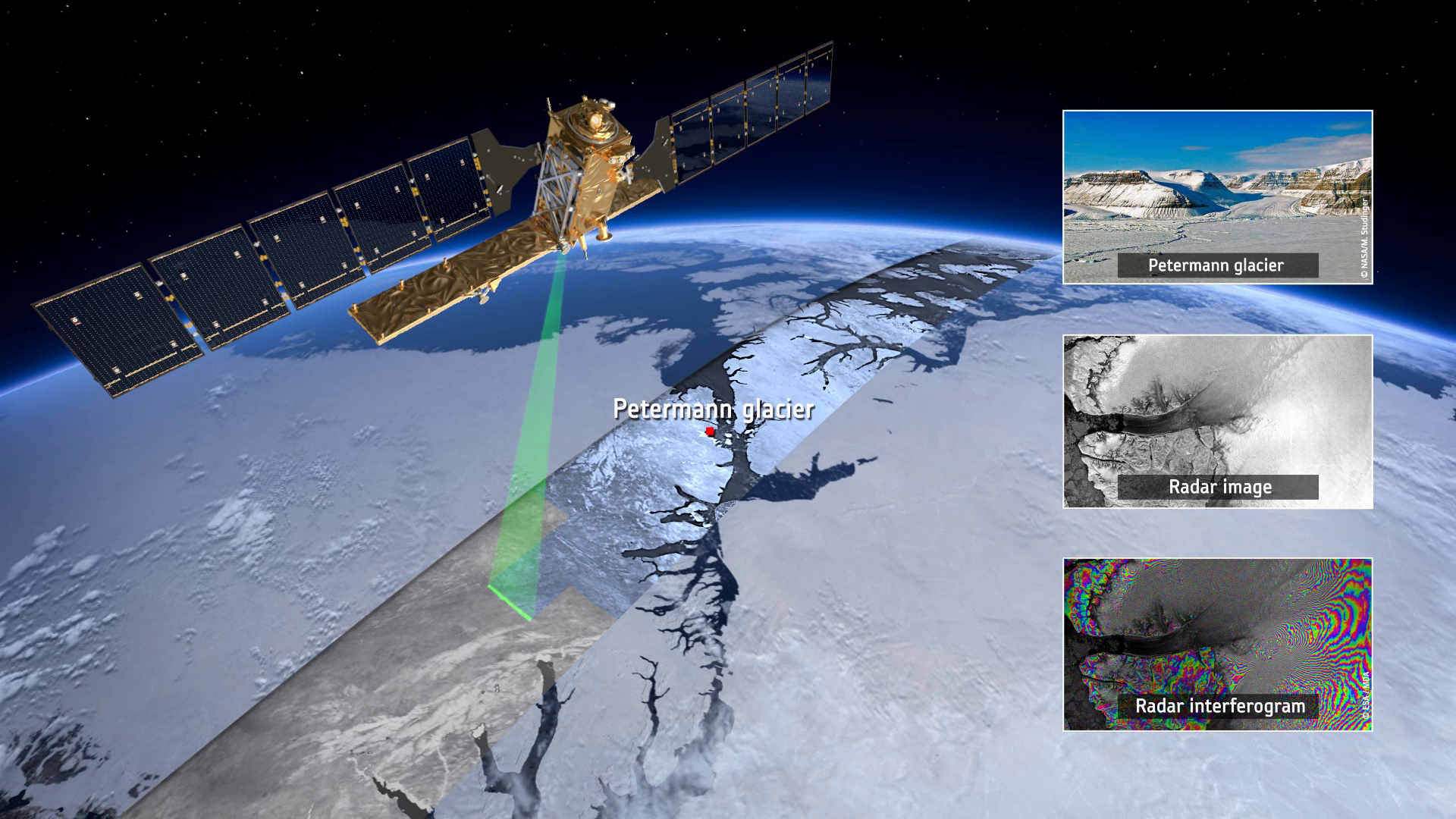 Using these many sources, scientists determined that the bottom of Zachariae Isstrom is being rapidly eroded by warmer ocean water mixed with growing amounts of meltwater from the ice sheet surface.

Dr Mouginot said, “Ocean warming has likely played a major role in triggering the glacier’s retreat, but we need more oceanographic observations in this critical sector of Greenland to determine its future.”

Sentinel-1 is dedicated to providing information for a range of practical applications for Europe’s Copernicus programme.

“Sentinel-1 has taken over European radar observations that were carried out by the ERS and Envisat satellites for two decades,” said Pierre Potin, ESA’s Sentinel-1 mission manager.

“The two-satellite constellation will offer unprecedented operational capabilities for mapping and monitoring the cryosphere, allowing, in particular, surface velocity of glaciers and ice sheets to be derived regularly.”

A paper published recently in the journal Remote Sensing emphasises the new opportunities that Sentinel-1 will bring for observing ice sheets.

Thomas Nagler, from the ENVEO Earth observation company and lead author of the paper, said, “With its wide swath and routine operational data collection, Sentinel-1 is capable of imaging the entire margin of Greenland every 12 days, enabling regular assessment of changes in glacier velocity and changes in the position of the most sensitive floating calving fronts.

ESA’s Climate Change Initiative treats the Greenland ice sheet as an ‘essential climate variable’. The initiative has assembled comprehensive datasets going back decades for scientists to understand exactly how these sensitive regions are changing and to help predict how the rest of the world will be affected.

These data are now being extended by the Sentinel-1 mission, which adds several terabytes every day.

The multi-agency, multi-satellite sets of data channelled by the Polar Space Task Group are also a valuable asset for the initiative.

ESA’s Chair of the Polar Space Task Group, Mark Drinkwater, said, “Without a routine monitoring capability it is not possible to provide the critical data for ESA’s Climate Change Initiative to assess the impact that the rapidly changing face of Greenland has on sea level.

“As we approach the COP21 meeting on climate change, it is clear that combinations of multi-agency radar together with Copernicus Sentinel-1A now fulfil a critical role in this monitoring task.”