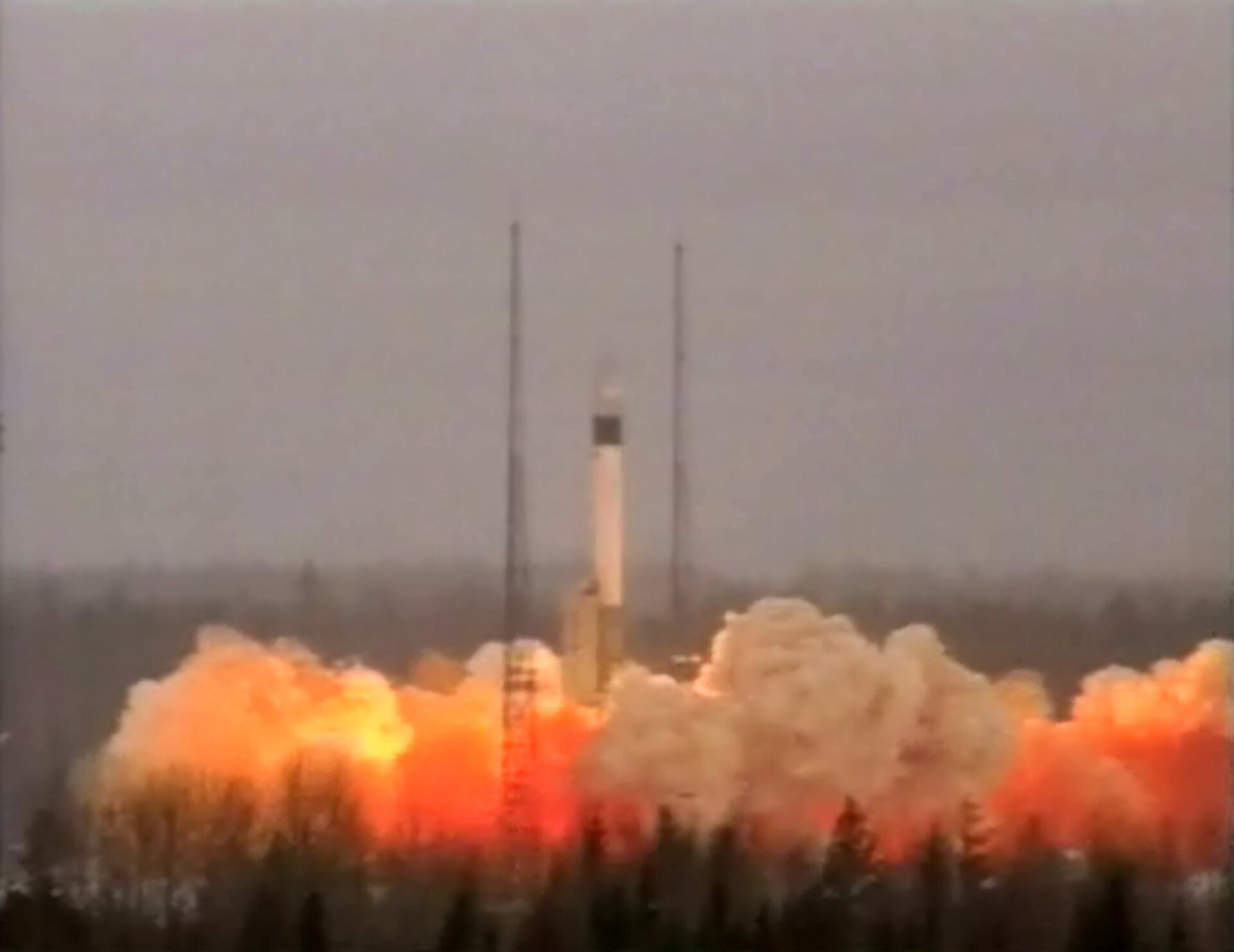 ESA PR 06-2009. This afternoon, the Gravity field and steady-state Ocean Circulation Explorer (GOCE) satellite developed by the European Space Agency (ESA) was lofted into a near-Sun-synchronous, low Earth orbit by a Rockot launcher lifting off from the Plesetsk cosmodrome in northern Russia.

With this launch, a new chapter in the history of Earth observation in Europe has begun. GOCE is the first of a new family of ESA satellites designed to study our planet and its environment in order to enhance our knowledge and understanding of Earth-system processes and their evolution, to enable us to address the challenges of global climate change. In particular, GOCE will measure the minute differences in the Earth’s gravity field around the globe.

The Russian Rockot launcher, derived from a converted ballistic missile, lifted off at 15:21 CET (14:21 GMT) and flew northward over the Arctic. About 90 minutes later, after one orbital revolution and two Breeze-KM upper-stage burns, the 1052 kg spacecraft was successfully released into a circular polar orbit at 280 km altitude with 96.7º inclination to the Equator. The launch was procured from Eurockot Launch Services, a German/Russian company based in Bremen, Germany.

Contact with GOCE was established via ESA’s tracking station in Kiruna, Sweden, shortly after separation. The spacecraft is now under the control of ESA’s teams at its European Space Operations Centre in Darmstadt, Germany.

"GOCE is ESA’s first science satellite dedicated to Earth observation since Envisat in 2002. The size has changed, but the rationale remains the same: to provide the best science our technology can deliver for the maximum benefit of the science community and ultimately the citizens of Europe and the world," said Jean-Jacques Dordain, ESA Director General.

GOCE was selected in 1999 as the first Earth Explorer Core Mission under ESA’s Living Planet Programme. The satellite was developed by an industrial team led by Thales Alenia Space in Turin, Italy. EADS Astrium Space in Friedrichshafen, Germany, provided the platform. Thales Alenia Space in Cannes, France, developed and integrated the main instrument using ultra-precise sensors developed by Onera of France. A total of 45 European firms have contributed to the building of the satellite.

For 24 months, GOCE will collect three-dimensional gravity data all over the globe. The raw data will be processed on the ground to produce the most accurate map of the Earth’s gravitational field to date and to refine the geoid: the actual reference shape of our planet. Precise knowledge of the geoid, which can be considered as the surface of an ideal global ocean at rest, will play a very important role in further study of our planet, its oceans and atmosphere. It will serve as the reference model for our measurement and modelling of sea-level change, ocean circulation and polar ice cap dynamics.

A unique payload onboard a unique spacecraft

The main payload instrument is a state-of-the-art Electrostatic Gravity Gradiometer incorporating six highly sensitive accelerometers, mounted in pairs along three perpendicular axes on an ultra-stable carbon-carbon structure. The mission will measure not gravity itself but the tiny differences in gravity between the accelerometer pairs 50 cm apart.

The data collected by GOCE will yield accuracy of 1 to 2 cm in the geoid altitude and 1 mGal for the detection of gravity-field anomalies (mountains, for instance, usually cause local gravitational variations ranging from tens of milligals to approximately one hundred). The spatial resolution will be improved from several hundreds or thousands of kilometres on previous missions to 100 km with GOCE.

In order to get the maximum performance from the Gradiometer, GOCE is designed to provide a highly stable and undisturbed environment, despite its low-altitude orbit which forces the spacecraft to endure slight but significant drag from the uppermost layers of the atmosphere. This is the main reason for its slender 5 metre-long arrowhead aerodynamic shape design.

The spacecraft also incorporates two low-power xenon ion engines, one primary and one backup, each able to deliver 1 to 20 milli-Newtons of thrust (the force equivalent to our exhaling). These thrusters will be used to make real-time compensation for atmospheric drag, based on the mean acceleration detected by the two accelerometers mounted along the velocity axis.

The spacecraft’s structure and design were also optimised to filter out all kinds of disturbance, by using ultra-stable materials to limit thermal cycling effects, without any deployable or moving parts.

One mission, many benefits

Over the coming six weeks, the teams from ESA and its industrial partners will check and commission GOCE. The spacecraft will then be transferred to its operational orbit at 263 km altitude and its payload will undergo a further six weeks of commissioning and calibration. Mission operations are scheduled to start in summer 2009.

The mapping of the Earth’s gravity field with such precision will benefit all branches of Earth science.

For geodesy, it will provide a unified reference model for height measurements worldwide, eliminating discontinuities between height systems for the various landmasses, countries and continents. This will enable better surveying of sea-level change, allowing scope to revisit a 200 year-plus history of recorded sea levels around the globe.

For oceanography, a better knowledge of the gravity field will significantly reduce current uncertainties regarding ocean heat and mass transfer, which will translate into tremendous improvements to global ocean-circulation and climate-forecasting models. GOCE will also improve our knowledge of the polar cap bedrock in Greenland and Antarctica. The precise geoid map will enable better orbit determination for satellites monitoring the ice sheet and thus increased measurement accuracy.

For geophysics, combining GOCE’s results with magnetism, topography and seismology data will help produce detailed 3D mapping of density variations in the Earth’s crust and upper mantle. This will be a major contribution to the improvement of all modelling of sedimentary basins, rifts, tectonic movement and sea/land vertical change, enhancing our understanding of the processes responsible for natural hazards.

One Earth Explorer up, more to come

"This launch success marks the dawn of a new generation of Earth sciences satellites in Europe,” said Volker Liebig, Director of Earth Observation Programmes at ESA. “It is the first of a new generation of small, dedicated science satellites and it paves the way for more Earth Explorer missions. The scientists are urgently awaiting the data sets from these missions. We have four more launches due over the next two years; this means that we are in for a very busy time."

GOCE is the first Earth Explorer Core Mission under ESA’s Living Planet Programme which was initiated in 1999 to foster research on the Earth’s atmosphere, biosphere, hydrosphere, cryosphere and interior, their interaction and the impact of human activities on these natural processes. Two more Core Missions, selected to address specific topics of major public concern, are already under development: ADM-Aeolus for atmospheric dynamics (2011), and EarthCARE to investigate the Earth’s radiative balance (2013). Three smaller Earth Explorer Opportunity Missions are also under preparation: Cryosat 2 to measure ice-sheet thickness (2009), SMOS to study soil moisture and ocean salinity (2009) and Swarm to survey the evolution of the magnetic field (2011).