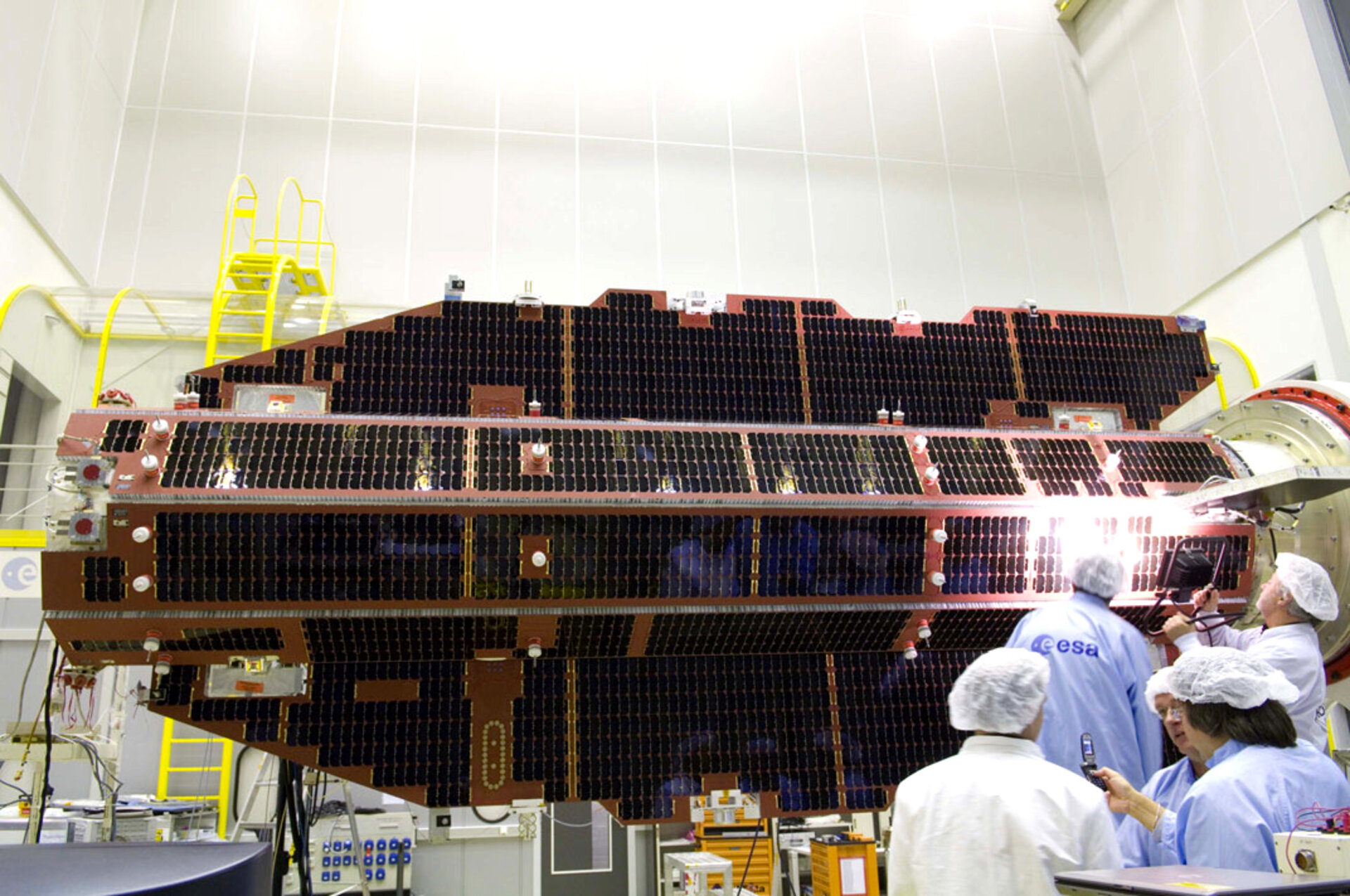 24 July 2008 - Launching in just two months' time, GOCE – now fully reconfigured for launch in September, is currently being prepared for shipment on 29 July 2008 from ESA's test facilities in the Netherlands to the Plesetsk Cosmodrome in northern Russia.

Originally, the Gravity field and steady-state Ocean Circulation Explorer (GOCE) mission had been scheduled for launch in May 2008, but as a result of precautionary measures taken following a problem with an upper-stage section of a Russian Proton launcher, the launch date was postponed until 10 September 2008. Consequently, the satellite had to be reconfigured for a so-called 'summer launch configuration'.

Since the GOCE gravity mission is designed to fly at a particularly low altitude of just 263 km and at a slight inclination with respect to an exact polar orbit, the satellite goes into the shadow of the Earth during polar nights for 28 minutes 135 days each year.

By going into the Earth’s shadow where no sun hits the satellite, GOCE experiences changes in temperature that could potentially affect measurements. Not knowing exactly when GOCE would launch, the option to choose whether it went into Earth’s shadow, referred to as an ‘eclipse period’, between October and February or between April and August was included in its design.

The choice between these two options is made by either launching into a northward equator crossing at 06:00 or at 18:00. The main difference between the launch times – as seen from the Sun – is that it determines whether the satellite flies clockwise or anticlockwise around the Earth.

Since GOCE will launch in September, the preferred eclipse period is April to August because it allows unaffected commissioning and science operations until April next year.

Over the last two months the satellite has been successfully reconfigured and fully tested and is now in the process of being prepared for its journey from ESA-ESTEC to the launch site in Russia.

On the morning of 29 July a container holding the GOCE satellite, along with six other containers carrying a whole host of support equipment, will be loaded onto trucks and taken to Schiphol Airport near Amsterdam in the Netherlands.

Once aboard an Antonov cargo aircraft, the shipment will be flown to Arkhangelsk, Russia, where the container will be transferred to a train for the rest of the journey to the Plesetsk Cosmodrome. Additional support equipment is being transported by ship to the launch site on 21 July from Antwerp, Belgium.

After the satellite is unpacked, a final check will be carried out before being mounted onto its Rockot launch vehicle 13 days prior to launch.

Once launched and commissioned, GOCE will map global variations in the gravity field with extreme detail and accuracy. This will result in a unique model of the geoid, which is the surface of equal gravitational potential defined by the gravity field – crucial for deriving accurate measurements of ocean circulation and sea-level change, both of which are affected by climate change.

GOCE-derived data is also much needed to understand more about processes occurring inside the Earth and for use in practical applications such as surveying and levelling.