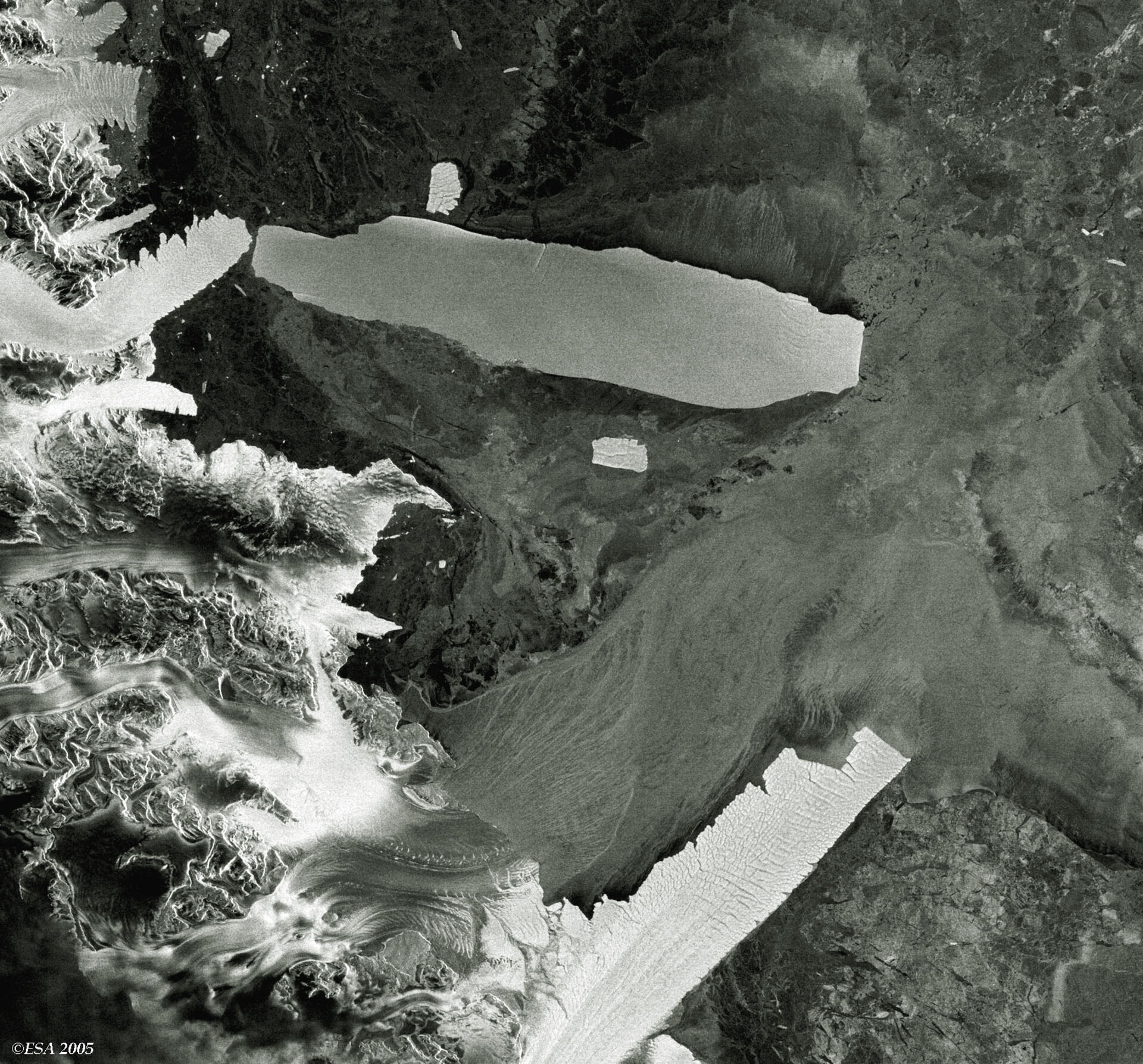 The mammoth B-15A iceberg appears poised to strike another floating Antarctic ice feature, a month on from a passing blow that broke off the end of the Drygalski ice tongue. As this Envisat image reveals, this time its target is the ice tongue of the Aviator Glacier.

First discovered in 1955, and named to mark the work done by airmen to open up the Antarctic continent, the Aviator Glacier is a major valley glacier descending from the plateau of Victoria Land along the west side of the Mountaineer Range. It enters the sea at Lady Newnes Bay, where it forms a floating ice tongue that extends into the water for about 25 kilometres.

This Envisat Advanced Synthetic Aperture Radar (ASAR) image was acquired on 16 May 2005 in Wide Swath Mode (WSM), providing spatial resolution of 150 metres across a 400-km swath. ASAR can pierce through clouds and local darkness and is capable of differentiating between different types of ice.

The sensor has been following the movements of B-15A since the beginning of the year, gathering the highest frequency weather-independent dataset of this part of the Ross Sea.

Measuring around 115 kilometres in length with an area exceeding 2500 square kilometres, the B-15A iceberg is the world's largest free-floating object. It is the largest remaining section of the even larger B-15 iceberg that calved from the Ross Ice Shelf in March 2000 before breaking up into smaller sections.

Since then its B-15A section has drifted into McMurdo Sound, where its presence blocked ocean currents and led to a build-up of sea ice that decimated local penguin colonies, deprived of open waters for feeding. During the spring of this year prevailing currents took B-15A slowly past the Drygalski ice tongue. A full-fledged collision failed to take place, but a glancing blow broke the end off Drygalski in mid-April.

The stretch of Victoria Land coast parallel to B-15A's current position is unusually rich in wildlife, noted for colonies of Adelie penguins as well as Weddell seals and Skuas. If B-15A were to remain in its current position for any prolonged length of time, the danger is that the iceberg could pin sea-ice behind it, blocking the easy access to open water that local animal inhabitants currently enjoy.

ASAR GMM images are routinely provided to a variety of users including the US National Oceanic and Atmospheric Administration (NOAA) National Ice Centre, responsible for tracking icebergs worldwide.

ASAR imagery is also being used operationally to track icebergs in the Arctic by the Northern View and ICEMON consortia, which provide ice monitoring services as part of the Global Monitoring for Environment and Security (GMES) initiative, jointly backed by ESA and the European Union.

This year also sees the launch of CryoSat, a dedicated ice-watching mission designed to precisely map changes in the thickness of polar ice sheets and floating sea ice.

CryoSat, in connection with regular Envisat ASAR GMM mosaics and SAR interferometry – a technique used to combine radar images to measure tiny centimetre-scale shifts between acquisitions - should answer the question of whether the kind of ice-shelf calving that gave rise to B-15 and its descendants are a consequence of ice sheet dynamics or other factors.

Together they will provide insight into whether such iceberg calving occurrences are becoming more common, as well as improving our understanding of the relationship between the Earth's ice cover and the global climate.