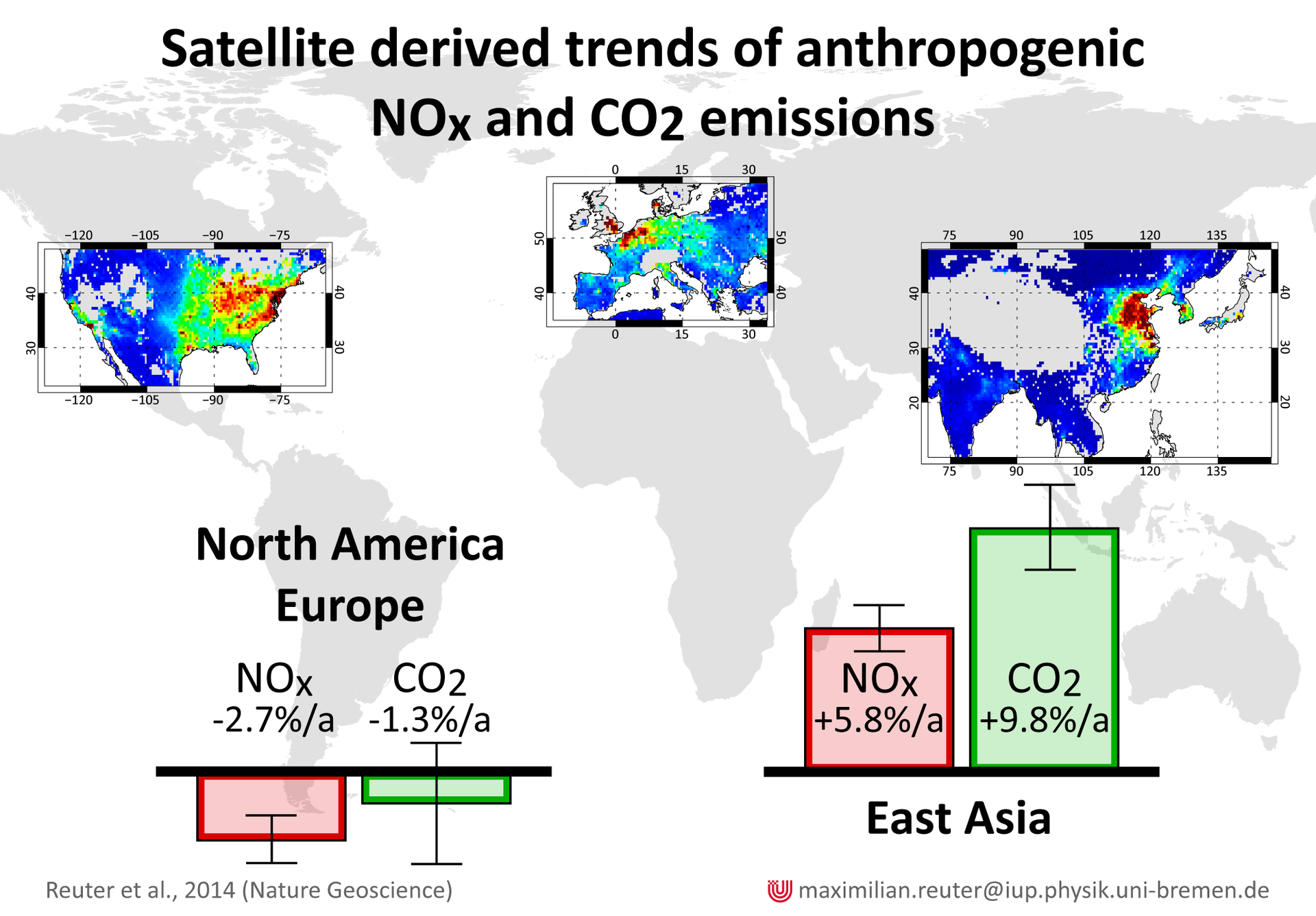 Data from ESA’s veteran Envisat satellite show ups and downs in the concentrations of the air pollutant nitrogen dioxide and the climate-relevant greenhouse gas carbon dioxide across the globe.

While Europe and North America show a decrease in emission trends between 2003 and 2011, emissions related to economic growth in East Asia continue to rise – but with a reduction in nitrogen oxides emitted per amount of carbon dioxide.

This demonstrates the use of cleaner technology in East Asia.

Nitrogen oxides are generated during the high-temperature combustion of fossil fuels in automobiles and industrial machinery. They contribute significantly to a reduction of air quality and can be the cause of respiratory problems.

At the same time, these sources release large amounts of carbon dioxide. Carbon dioxide is toxic only at very high concentrations, but is the most important man-made greenhouse gas, leading to global warming and its related consequences.

In a study published yesterday in Nature Geoscience, scientists from the University of Bremen in Germany used data from the Sciamachy instrument on ESA’s Envisat satellite to measure nitrogen dioxide and carbon dioxide trends from 2003 to 2011. They also exploited  Sciamachy-based data products generated within the ‘GHG-CCI’ project under ESA’s Climate Change Initiative.

Using this method, the scientists were able to better see where and when carbon dioxide was emitted. For example, it showed that less carbon dioxide from local anthropogenic sources is emitted during weekends in Europe and North America compared to week days.

“This has never been observed from space before and shows how accurate the used method is,” said Dr Reuter.

Although Envisat’s mission ended in 2012, a decade of data from its 10 instruments is still being exploited for studies on Earth’s atmosphere, land, oceans and ice caps.

“Unfortunately, none of the existing nor any of the planned near-future satellites are designed to directly observe carbon dioxide emissions of cities, power plants, volcanoes or other important emission hot spots,” said Michael Buchwitz, co-author of the study and GHG-CCI scientific leader.

“This will only be possible with the proposed mission CarbonSat.”

CarbonSat is one of the two candidates for ESA’s eighth Earth Explorer satellite.