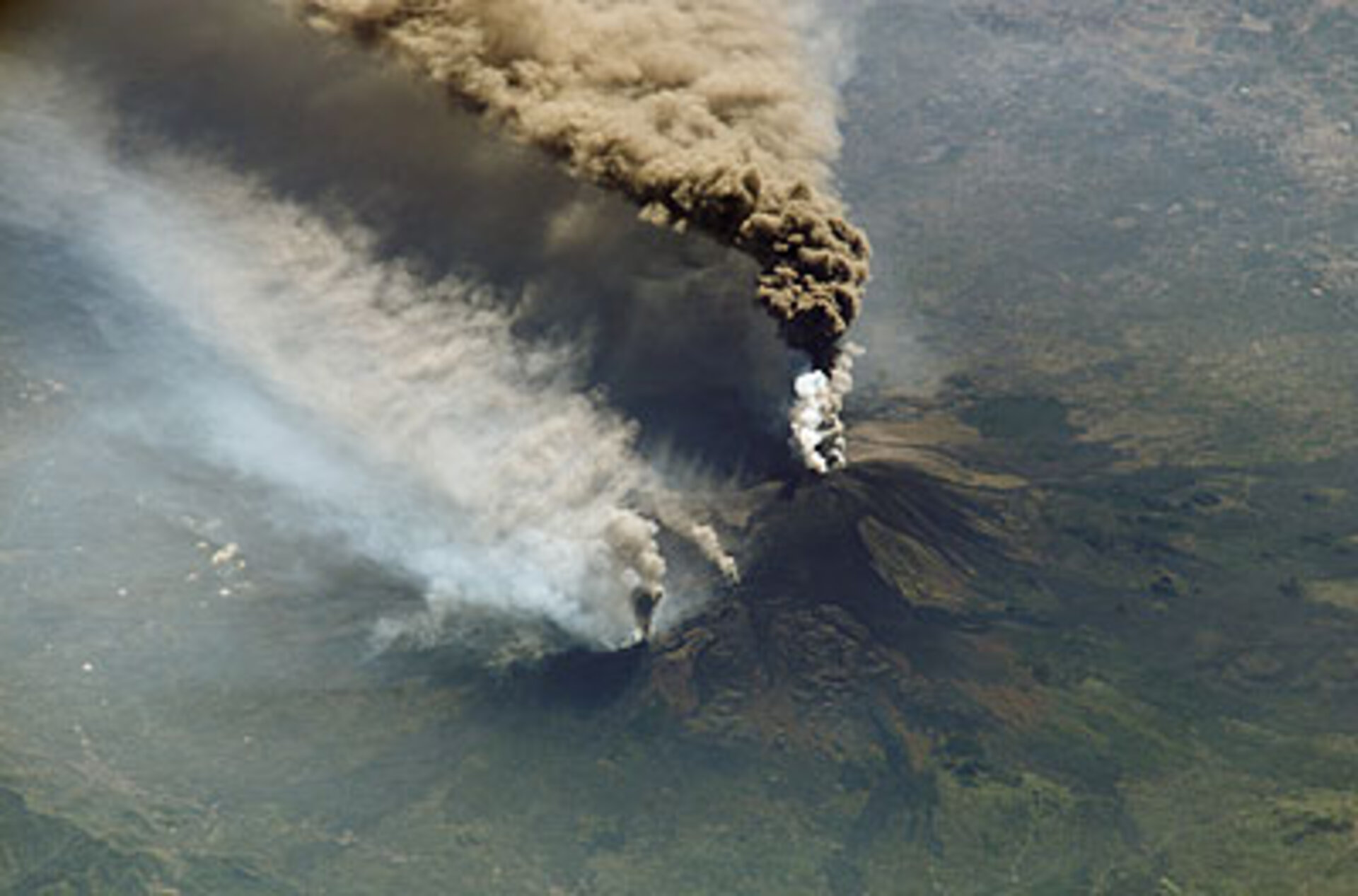 Levels of sulphur dioxide around Mount Etna have dropped three to four times since the volcano's initial eruption, according to an analysis of ESA satellite data.

Data from the Scanning Imaging Absorption Spectrometer for Atmospheric Chartography (SCIAMACHY) instrument onboard ESA’s Envisat spacecraft show the highest concentration of sulphur dioxide on 10 November centred on Italy's Calabria region and the southeastern coast of the Italian "toe."

"When comparing the current values from my analysis with those during the eruption, sulphur dioxide columns have decreased by a factor of three to four," said Andreas Richter, a scientist with the Institute of Environmental Physics at the University of Bremen in Germany.

Since its first big eruption on 27 October, Etna has continued to spew huge plumes of smoke, with ash falling on area residents for weeks. The eruption also threw large amounts of sulphur dioxide into the atmosphere. Together with the plume of ash and other gases, the sulphur dioxide gas has been transported by the prevailing winds towards Africa and the eastern Mediterranean.

"Even with its sporadic eruptions, Mount Etna is the largest source of sulphur dioxide in Europe, emitting more of the dangerous sulphur dioxide gas than all coal power plants and vehicles taken together," Richter explained.

Based on a review of ESA satellite data acquired since the first eruption, Etna’s smoke and ash plume first drifted south, toward the African continent, then west. After 1 November, however, winds shifted the plume to the east. "Traces can be seen as far away as the Black Sea," Richter added.

Sulphur dioxide is one of the chief gases responsible for acid rain, the phenomenon that reduces atmospheric visibility and causes damage to forests, soils, fish and other creatures, materials and human health.

An earlier ESA analysis of sulphur dioxide emitted by the Etna explosions (see related story, 30 October) used data provided by the Global Ozone Monitoring Experiment (GOME) instrument carried on ESA’s ERS-2 satellite. The University of Bremen utilized the higher spatial resolution afforded by the Envisat SCIAMACHY sensor for the current analysis. This new instrument looks at sunlight scattered in the atmosphere to measure a number of atmospheric components involved in pollution, global warming and ozone-hole chemistry.

Although Etna is starting to settle down, several other volcanoes around the world have been active, including El Reventador in Ecuador and the Nyamuragira in the Democratic Republic of Congo, close to Lake Victoria. SCIAMACHY data acquired the same day as those from Etna shows the sulphur dioxide plume from the Nyamuragira volcano that has been constantly emitting sulphur dioxide for weeks at levels comparable or higher than those observed near Etna. Nyamuragira, which first erupted on 26 July, is close to the Nyiragongo volcano that razed much of city of Goma in January in Africa's most destructive volcanic eruption for 25 years.

In South America, Ecuador's El Reventador volcano has spewed forth about four times more sulphur dioxide than Etna, according to the University of Bremen analysis of data from ESA’s Global Ozone Monitoring Experiment (GOME) sensor on the ERS-2 spacecraft. The volcano, 100 km east of Quito, exploded with little advance warning on 3 November.

As seen in the accompanying chart, Reventador's smoke and ash plume covers as large an area as Etna's, with quite large concentrations of sulphur dioxide close to the coast and lower values extending over the ocean.

According to Richter, the largest sulphur dioxide value measured in the last two weeks around El Reventador was 10 DU, the same as Etna's, but the high concentrations were observed on more occasions.