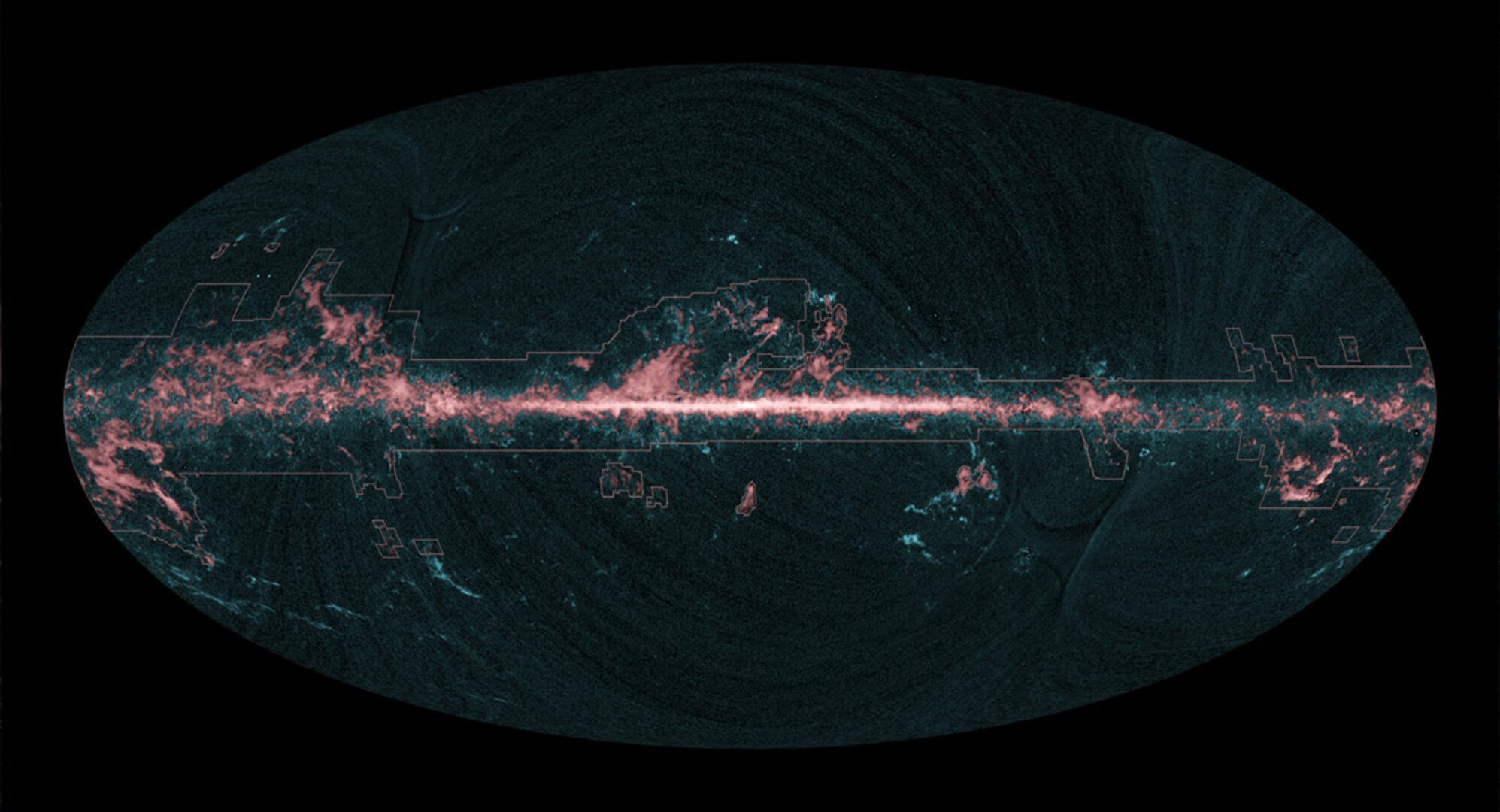 This all-sky image shows the distribution of carbon monoxide (CO), a molecule used by astronomers to trace molecular clouds across the sky, as seen by Planck (blue). A compilation of previous surveys (Dame et al. (2001)), which left large areas of the sky unobserved, has been superimposed for comparison (red). The outlines identify the portions of the sky covered by these surveys.

Molecular clouds, dense and compact regions throughout the Milky Way where gas and dust clump together, represent one of the sources of foreground emission seen by Planck. The vast majority of gas in these clouds consists of molecular hydrogen (H2), and it is in these cold regions that stars are born. Since cold H2 does not easily radiate, astronomers trace these cosmic cribs across the sky by targeting other molecules, which are present there in very low abundance but radiate quite efficiently. The most important of these tracers is CO, which emits a number of rotational emission lines in the frequency range probed by Planck's High Frequency Instrument (HFI).

Emission lines affect a very limited range of frequencies compared to the broad range to which each of Planck’s detectors is sensitive, and are usually observed using spectrometers. But some CO lines are so bright that they actually dominate the total amount of light collected by certain detectors on Planck when they are pointed towards a molecular cloud.

The Planck image represents the first all-sky map of CO ever compiled. As highlighted in this image, the largest CO surveys thus far have concentrated on mapping the full extent of the Galactic Plane, where most clouds are concentrated, leaving large areas of the sky unobserved.

The CO map compiled with Planck shows concentrations of molecular gas in portions of the sky that have not been observed before, such as at high galactic latitudes, where clouds that are relatively close to the Solar System might be projected on the all-sky map. Planck's high sensitivity to CO also means that even very low-density clouds can be detected, and new details can be revealed in clouds that were already known.

Follow-up observations and further studies of these stellar nurseries will allow a detailed investigation of the physical and chemical conditions that lead to the formation of molecular clouds, shedding new light on the very early phases of star formation.