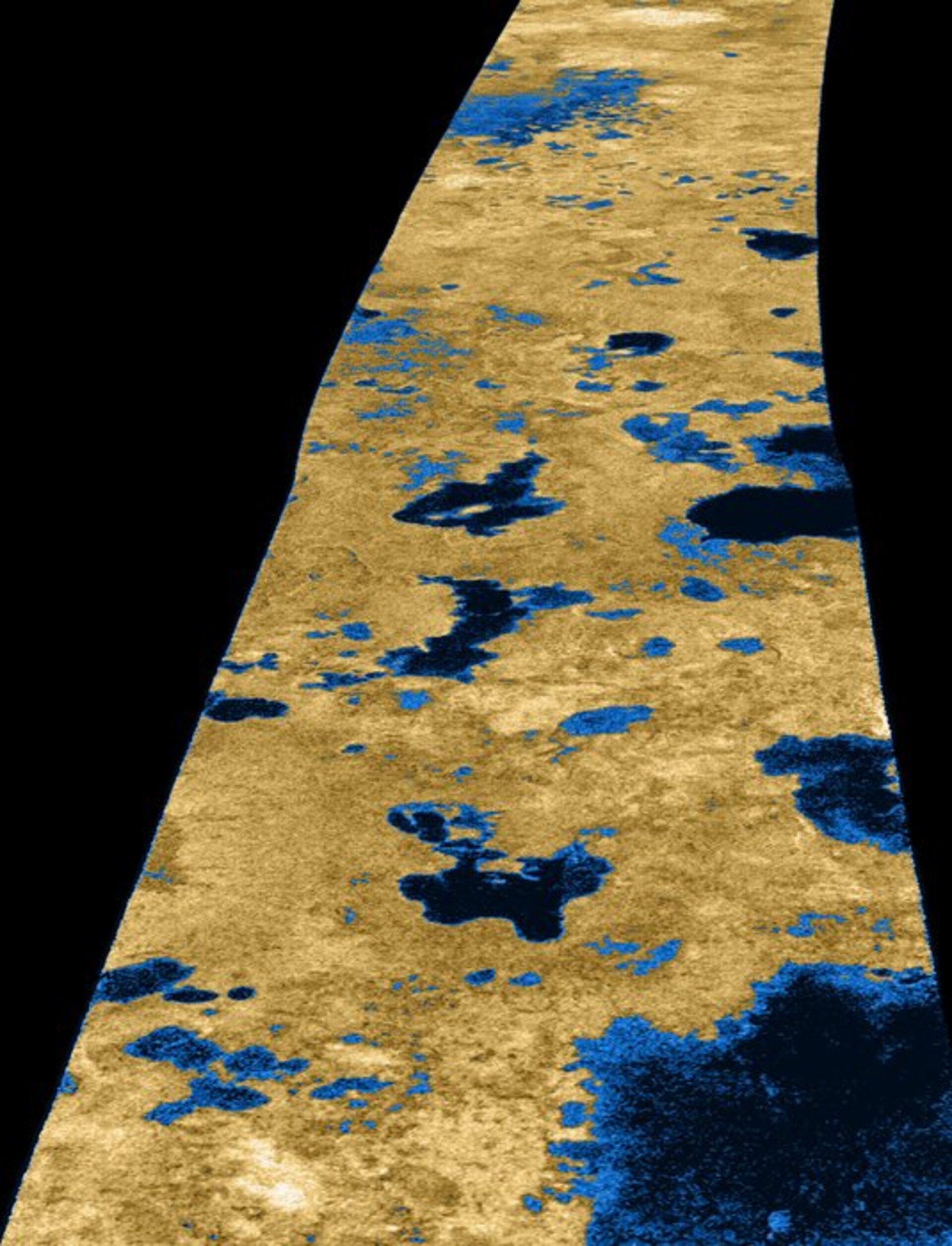 This radar image from the Cassini orbiter shows a thin strip of surface on Saturn’s moon Titan. The yellow-hued terrain appears to be peppered with blue-tinted lakes and seas. However, these would not be much fun to splash around in – rather than containing water, they are filled with liquid methane.

Cassini has been orbiting Saturn since 2004, and has studied Titan in detail. Alongside the Cassini orbiter was the Huygens probe, which separated from the orbiter on 25 December 2004 and landed on Titan 11 years ago this week, on 14 January 2005. This was the first landing on an outer Solar System body.

As intended, Huygens sent back data for a short time after landing – about 72 minutes – before its mission ended. The probe provided a unique insight into the moon’s dense nitrogen-rich atmosphere during the descent, and gathered in situ measurements of the surface.

One of its discoveries was that the landing site resembled a dried lakebed, and there were channels and valleys nearby, hinting at the sporadic presence of surface liquid. A year later the presence of liquid-filled lakes was confirmed, making Titan the only Solar System body other than Earth known to have liquid lakes and seas on its surface.

This image is made from observations gathered during a flyby of Titan on 22 July 2006, when the orbiter was about 950 km from the moon’s surface. It has been coloured to give a rough approximation of what Cassini saw – it does not reflect what the human eye would see.

Brighter regions that strongly reflected Cassini’s radar signal look different from regions that reflected the signal weakly: bright areas show up as a tan–yellow shade, while less reflective regions appear as dark, mottled patches. These patches have also been tinted blue to make them even clearer; this is a research technique used by scientists to enhance and highlight various features and details in their observations.

Although Huygens’ mission is over, we have many more opportunities to explore Titan with Cassini. The orbiter will perform nearly 40 more flybys of Titan before the mission ends in September 2017. These will range from close flybys at just under 1000 km, like the one responsible for this image, to more distant ones when the moon will be seen from a vantage point up to a million kilometres away.

This image was originally published on 3 January 2007.