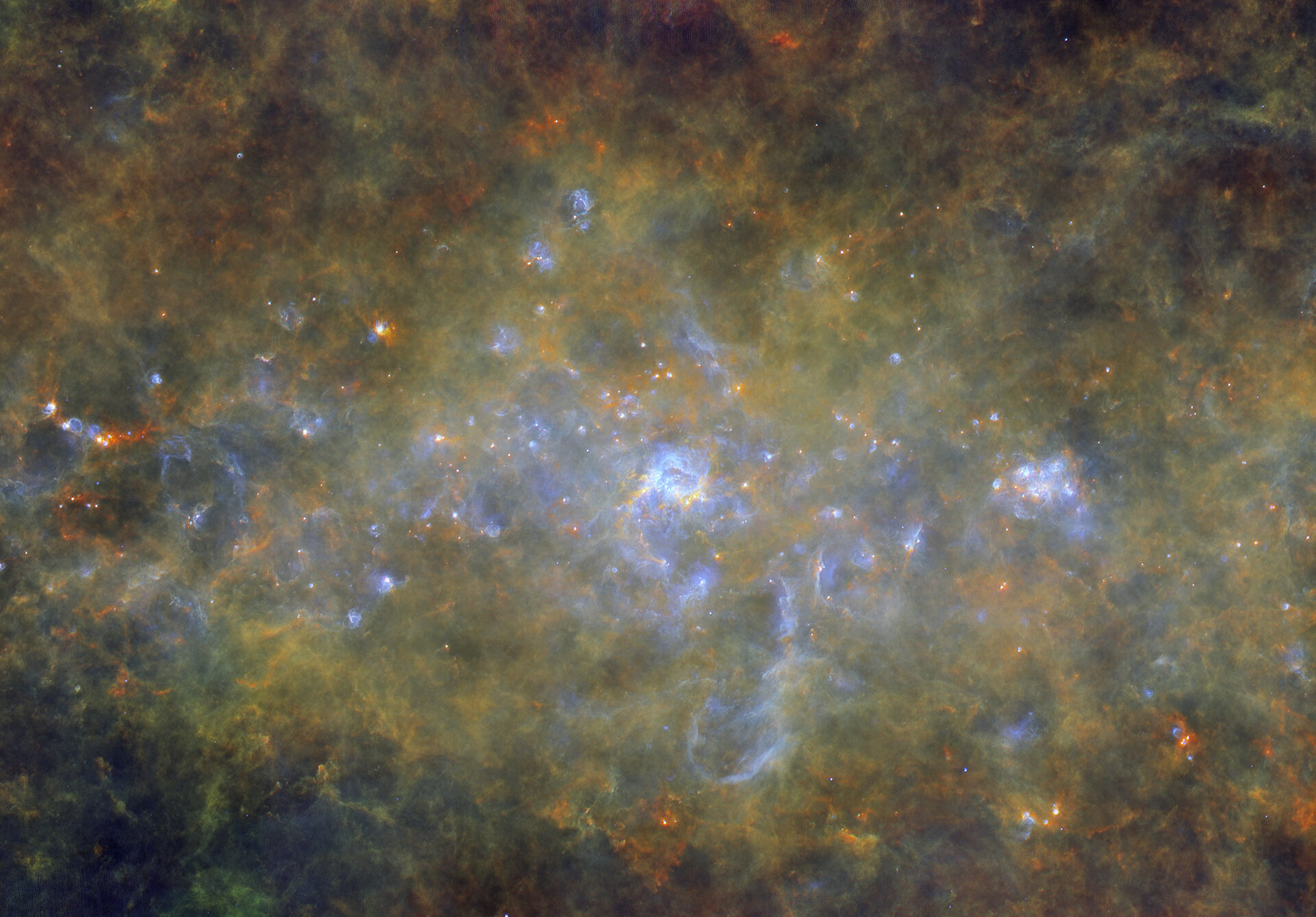 Hidden from our sight, the Westerhout 43 star-forming region is revealed in full glory in this far-infrared image from ESA’s Herschel space observatory. This giant cloud, where a multitude of massive stars come to life in the billowing gas and dust, is almost 20 000 light-years away from the Sun, in the constellation of Aquila, the Eagle.

Massing more than seven million Suns, this region is home to over 20 stellar nurseries, which are being heated by the powerful light from newborn stars within. These hubs of star formation stand out in blue hue against the cooler yellow and red surroundings.

Nestled in the glowing blue bubble of gas at the centre of the image is a cluster of extremely hot and massive Wolf-Rayet and OB stars, which together are over a million times brighter than our Sun. This bubble, hosting the seeds that will grow into several new stellar clusters, is one of the most prolific birthplaces of stars in our Galaxy.

A less extreme but still very active stellar factory is the large complex of blue bubbles visible in the image towards the right. Scrutinising the Herschel images, astronomers have found evidence of what appears like a network of filaments linking these two intense hubs of star formation.

Located in a very dynamic region of the Milky Way, at the transition between the central bar of the Galaxy and one of its spiral arms, Westerhout 43 is an excellent laboratory to study how stars – especially massive ones – take shape at the collision of two large flows of interstellar matter.

Investigating star-forming regions across our Galaxy in unprecedented detail was one of the main goals of Herschel, which was launched in 2009 and operated for almost four years, observing the sky at far-infrared and submillimetre wavelengths. Sensitive to the heat from the small fraction of cold dust mixed in with the clouds of gas where stars form, imaging such regions points astronomers to dense areas of gas where new stars are being born, enabling them to study the action in detail, just as in this image.

This three-colour image combines Herschel observations at 70 microns (blue), 160 microns (green) and 250 microns (red), and spans about 3º on the long side; north is up and east to the left. The image was obtained as part of Herschel’s Hi-GAL key-project, which imaged the entire plane of the Milky Way in five different infrared bands. A video panorama compiling all Hi-GAL observations was published in April 2016.